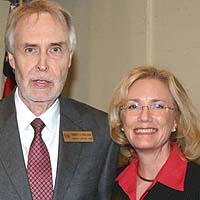 Robert A. Stallings and Janette Brown, executive director of the Emeriti Center

Robert A. Stallings, professor emeritus of policy, planning, and development, received the 2007 Faculty Leibovitz Award for Service to Seniors at the annual faculty retirement ceremony at Town & Gown.

Stallings, an active member of the USC Emeriti Center and the Retired Faculty Association, contributes to the retiree community through his self-taught expertise with personal computers.

“Bob Stallings is a perfect example of a professor becoming passionate about a new field upon retirement,” said Janette Brown, executive director of the Emeriti Center.

In the spring of 2007, Stallings organized the USC Retiree Computer Help Squad, a group of computer-savvy retired faculty and staff, which allows USC retirees to receive free help with computing needs. In addition, he volunteered his time last fall to co-teach a series of free computer literacy workshops for USC retirees through the Emeriti College.

Outside of his computer projects, Stallings has made contributions for seniors through his research on the social dynamics of disasters (earthquakes, floods, hurricanes, fires, etc.). His expertise in this area has highlighted the ways in which disasters and their consequences affect society as a whole.

Stallings joined the SPPD faculty in 1975 as a member of what was then the School of Public Administration. Holder of a Ph.D. in sociology, he had a joint appointment with the USC Department of Sociology.