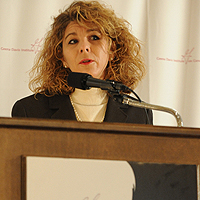 The findings are a microcosm of a much bigger phenomenon in American film and television, said USC Annenberg professor Stacy Smith.

A new study by a USC Annenberg School for Communication research team found there has been no improvement in gender balance in Academy Award-nominated films during the past 30 years in the “best picture” category.

The data show there are almost three speaking males for every one female and more than four white speaking characters for every one non-white character. The researchers separated the sample into three periods by release date (1977-1986; 1987-1996; 1997-2006).

“Unfortunately, females are grossly underrepresented in these prestigious films,” said Stacy Smith, USC Annenberg communication professor and principal researcher. “The gender-imbalance findings are a microcosm of a much bigger representational phenomenon in American film and television,” she added.

Susan Thorne, vice chair of the Screen Actors Guild Women’s Committee, said, “I am aware of this 30-year stalemate. The question is, ‘what are we going to do about it?’ ”

She said the answer to that question could be another women’s movement: “We have to do it again. They didn’t get it.”

The findings coincide with broader research unveiled at a January conference sponsored by the Geena Davis Institute on Gender and the Media that showed fewer than 28 percent of speaking characters in G-rated films from 1990-2006 are female; females were more than five times likely than males to be shown in sexually revealing clothing in the top 400 movies from 1990-2006 (rated G, PG, PG-13, R); appearance is heavily focused upon when a female does play a lead role in G-rated films; and in more than 1,000 television shows created for children, male characters occur roughly twice as often as females.

“While everyone agrees that media representation is social power and that relative invisibility contributes to social inequality, it is vitally important to back up such arguments with hard data,” said Larry Gross, director of the USC Annenberg School for Communication. “Only when provided with the unambiguous results of rigorous research can advocates for media equity move the debate beyond empty rhetoric. This study represents the sort of impact that communication scholarship can have on issues of long-term social importance.”

Smith also researched the relationship between off-camera and on-camera gender. Only the presence of a female director had any impact on the gender roles. With a female director, the amount of female speaking characters jumped from 27 percent to 41 percent.

“Though the number of women directors in this sample of films was very small, these few women seem to be powerful players in the representation of females shown in film,” she said.

Results from this study and more of professor Smith’s work on gender and the media may be found online at http://annenberg.usc.edu