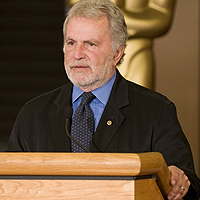 Sid Ganis, president of the Academy of Motion Picture Arts and Sciences

The Academy of Motion Picture Arts and Sciences has donated $3 million to support the new complex construction at the USC School of Cinematic Arts, marking the latest step in a relationship that began with the joint creation of the nation’s first university-based film program in 1929.

“We are incredibly proud of our longstanding ties with the academy,” said Dean Elizabeth M. Daley. “For over seven decades, our close relationship has been a vibrant catalyst for the evolution of the industry and the art form.”

It was in February of 1929 that Douglas Fairbanks Sr., the first president of the academy, and his longtime friend and then-president of USC, Rufus von KleinSmid, put together a plan to cultivate the future of cinema through higher education.

Their first step was the launch of “Introduction to Photoplay,” a course designed to give students an understanding of the origins, history and sociological aspects of the industry. In three short years, the popularity of the subject matter enabled USC to be the first American college or university to offer a program of study leading to a bachelor’s degree in cinema.

“The academy played a role in the founding of what is now USC’s School of Cinematic Arts, and as the school makes this enormous leap forward with new facilities, it seemed appropriate for the academy to play a role again,” he added.

The academy gift is the latest example of the entertainment industry’s investment in the future of cinema by strengthening the school’s position as the leading center for film, television and interactive media.