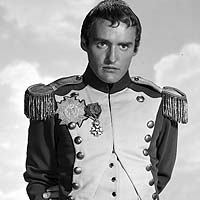 A rarely seen still of Dennis Hopper in costume for the 1957 Warner Bros. film Story of Mankind, in which the actor portrayed Napoleon.

How do you build a small family business into a multibillion dollar industry giant?

Bit by bit, as researchers have discovered over the past 30 years of combing through the USC School of Cinematic Arts Warner Bros. Archives, whose contents offer a unique glimpse into the Golden Age of the Hollywood studio system.

Located within four massive rooms just east of the University Park campus, the Warner Bros. Archives began in 1977 when the studio donated an astronomical collection of documents and other ephemera to USC.

Thanks to the gift, the university became the steward of the largest and possibly richest single studio collection of such assets in the world, which serves a growing global audience of scholars, researchers, students and film historians each year.

“Not only are the archives a complete history of a working movie studio, they are also a history of America,” said Leith Adams, the executive director of Warner Bros. Corporate Archives (the company’s counterpart to the USC trove).

Adams, who earned his Master of Fine Arts from the cinema program in 1978, knows of what he speaks: He helped inventory the entire collection when it was transferred to the university back in the ’70s. “Thanks to these records, anyone can pretty much follow all aspects of the making of some the industry’s most classic films.”

With The Jazz Singer, Casablanca and Rebel Without a Cause among the documented movies, the collection is the only grouping of its kind to bring production, distribution and exhibition records together to detail the activities of a vertically integrated studio.

“It’s really amazing to see how it’s all organized,” said lead curator Sandra Joy Lee, pointing to the more than 1,000 physically printed volumes that direct her and curator Emily Carman to the countless boxes and containers stored in the archive’s immense space. (Copies of the volumes that catalogue the collection also are stored in the Cinematic Arts Library in Doheny Memorial Library and at Warner Bros.)

Recalling how individual departments at the legendary studio were “so proud of what they were doing that they felt empowered to save the history of their work,” Adams noted that the concerted effort eventually resulted in storage space constraints, which led to the collection’s donation to USC so the documents could exist in a setting focused on education and still be easily accessible by researchers.

Able to host up to three individuals at a time on site, the archive receives more than 130 requests per month for access to its holdings and also offers those unable to visit the Los Angeles location fee-based research services.

Originating from all points of the globe, the requests are as varied as the collection and have ranged from historical legal case research by a Los Angeles-based law firm to Cin�math�que Fran�aise in Paris, which sought materials for a Dennis Hopper exhibit.

In some of her current initiatives, Lee is assisting one author who is recounting the history of chemistry in films as well as other writers interested in the lives of influential television producer Roy Huggins, actress Ida Lupino and the legendary Errol Flynn.

Turning to original location shots from Chico, Calif., which served as Sherwood Forest in The Adventures of Robin Hood, Lee recalled that the film’s star was the topic of one of her favorite requests from a professor in Australia.

“He asked if we could find any evidence that Errol Flynn introduced the idea of the Tasmanian Devil cartoon character, and it was an interesting question because Flynn was originally from Tasmania,” she said. “However, the character’s first appearance at Warner Bros. was after Flynn left the studio, so we don’t believe he had any connection with it.”

Above all, Lee is quick to point out that working among the archives is far from the solitary experience people may connect with a librarian.

“We’re in constant contact with so many people from all over the world,” she said. “It’s deceiving to think any of this is a quiet existence.”