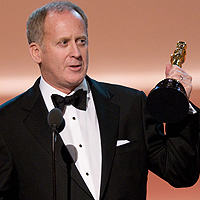 USC School of Cinematic Arts alumnus Robert Elswit ’75 won his first Oscar at the 80th Annual Academy Awards ceremony for his cinematography on There Will Be Blood.

“I’m just in shock,” said Elswit, who also acknowledged the film’s production crew in his brief acceptance speech. “Thank you so much.”

Nominated for best picture, the drama follows an oilman who tricks a local farmer into signing away his valuable drilling rights and rejects his own son after the boy suffers an injury.

“We’re really all standing on the shoulders of Daniel Day-Lewis,” said Elswit in praise of the film’s leading man, who earned his second Oscar later in the evening.

Elswit was nominated for an Academy Award in 2005 for his cinemtography on Good Night, and Good Luck.

During the live presentation, an honorary Academy Award was given to USC School of Architecture alumnus Robert Boyle, 98, who mentioned the university during his acceptance speech.

The renowned production designer worked on such films as North by Northwest, Fiddler on the Roof and The Thomas Crown Affair.