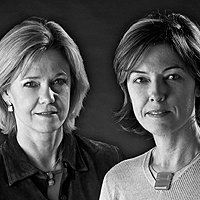 Dana Priest and Anne Hull of The Washington Post are winners of this year’s Selden Ring Award for Investigative Reporting for their coverage of conditions at the Walter Reed Army Medical Center.

The $35,000 annual prize, presented by the School of Journalism at the USC Annenberg School for Communication, recognizes the year’s outstanding work in investigative journalism that led to direct results.

Beginning in February 2007, the Post published a series of articles detailing how the once “crown jewel of military medicine” had been transformed into “a holding ground for physically and psychologically damaged outpatients” living in poor conditions and struggling in a “messy bureaucratic battlefield nearly as chaotic as the real battlefields they faced overseas.”

“The Washington Post series exposing the outrageous conditions … is precisely the kind of journalism the Selden Ring award was created to honor and encourage,” wrote the judges when announcing the award. “The reporters wrote what they saw firsthand � horrible, unsanitary conditions for outpatient care. They witnessed uncaring treatment, bureaucracy that ignored human needs. They told this story with great authority and power. Walter Reed, once considered the gold standard for treatment of soldiers, was revealed as badly in need of overhaul. The impact of the series was immediate and sweeping. At a time when the country is still divided on the war in Iraq, all sides agree that our veterans deserve the finest care.”

Michael Parks, the Pulitzer Prize-winning former editor of the Los Angeles Times who now serves as director of USC Annenberg’s School of Journalism, said, “If it were not for these two reporters, our veterans would continue to suffer needlessly and unconscionably. This is exactly what investigative reporting should do. Hold the government accountable to its people.”

Two other news organizations were recognized as finalists for the 2008 Selden Ring Award.

The New York Times was honored for “A Toxic Pipeline.” According to the judges: “The reporters undertook an ambitious global investigation that accomplished what the FDA and authorities in other countries could not. Their sleuthing traced the source of toxic chemicals in drugs that killed people in Panama. The series caused the FDA to halt the import of diethylene glycol from China, led to recalls in more than 30 countries and forced China to close a factory.”

The Chicago Tribune was lauded for “Hidden Hazards.” From the judges: “This series did what readers so often ask us to do: It stood up for them. The Tribune reporting shed a powerful spotlight on problems the Consumer Product Safety Commission failed to uncover. The reporters found unsafe car seats, toys and cribs that killed kids. The newspaper gave readers useful graphics in print and online to understand the defects in products and how to use them safely.”

The winners were selected from a field of more than 80 nominations. Beyond the winner and finalists, the judges wrote that “in a year dominated by newsroom budget cuts, ambitious investigative reporting is alive and well at newspapers of all sizes.”

In April, Priest and Hull will come to Los Angeles for the award presentation, meet with students and participate in a symposium on investigative journalism.

The Selden Ring Award for Investigative Reporting was established in 1989 by the late Selden Ring, a Southern California business leader and philanthropist.

He started the award to honor journalists whose investigative reporting informed the public about major problems or corruption in society and yielded concrete results.