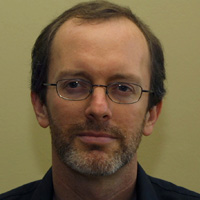 Anderson and Willis will receive funding for a year of work.

USC School of Cinematic Arts faculty members Steve Anderson and Holly Willis have received a grant from the John D. and Catherine T. MacArthur Foundation to probe one of the digital era’s most pressing issues: fair use of protected assets in support of learning.

The initiative’s goal is to create a network resource designed to promote, engage and organize academic communities to articulate their needs, models and ethical principles surrounding the fair use of copyrighted material in teaching and research.

Anderson and Willis were among 17 recipients who received awards as part of the first Digital Media and Learning Competition funded by the MacArthur Foundation and administered by the Humanities, Arts, Science and Technology Advanced Collaboratory. All the grant winners were celebrated at an event in Chicago on Feb. 21.

“People who teach with media need to take a leadership role in advocating for the preservation and expansion of fair use,” said Anderson, who was selected along with Willis from a pool of more than 1,000 applications.

“Critical Commons extends the work we have been doing at IML for nearly a decade to make sure educators can continue to use media in critical, transformative ways to promote digital media literacy.”

Jonathan Fanton, president of the MacArthur Foundation, said, “The ubiquitous nature of digital media has profound implications for learning that we are only just beginning to understand.”

Fanton added that all the winners “represent the best thinking from many disciplines and professions working to harness the power of the Web for learning, and we look forward to the insights they will provide.”

Collaboratory co-founders Cathy N. Davidson of Duke University and David Theo Goldberg of the University of California’s Humanities Research Institute were thrilled with the award winners.

“We are at a crucial historical juncture where technological, scientific and cultural changes leave us with both great responsibility and great opportunity,” said Davidson, while Goldberg noted that the awards “and the competition generally, have identified inventive technologies by which learning is networked, expanded, interactive and engaged. This is the give and take of learning at its very best.”

The John D. and Catherine T. MacArthur Foundation is a private, independent grant-making institution dedicated to helping groups and individuals foster lasting improvement in the human condition. The competition is part of a five-year, $50 million digital media and learning initiative designed to help determine how digital technologies are changing the way young people learn, play, socialize and participate in civic life.

As recipients of the award, Anderson and Willis will receive funding for a year of work and will share their results on a public Web site as well as at a conference next year.

As part of the prize, Anderson and Willis will receive special consultation support on everything from technology development to management training and will be invited to showcase their work at a conference that will include venture capitalists, entrepreneurs, educators and policy makers seeking the best ideas about digital learning.

Advocating Fair Use in Learning