People living in low-income, disadvantaged communities across much of urban Los Angeles lack the means to cool their homes, posing a growing threat to their health — and their lives — from extreme heat waves due to global warming, new USC research shows.

The communities across southern L.A. are most vulnerable, underscoring social inequities as a warming world affects populations differently. The USC research aims to help prepare the megalopolis for big disruptions, manifest in the coronavirus crisis today and climate change tomorrow.

“We studied how residential electricity use may increase in a warming world,” said Kelly Sanders, an author of the study and associate professor of civil and environmental engineering at the USC Viterbi School of Engineering. “These will be the people and neighborhoods least likely to be resilient to climate change because it’s harder for people in low-income communities to adapt.”

COVID-19 adds urgency, Sanders said, because “it has underscored the importance of preparing for shocks, particularly those that disproportionately impact underserved populations. We know that extreme heat events are increasing over time, and we hope that our work can be used to direct resources towards building resilience to warming in the vulnerable communities that might suffer most.”

The study was published today in Environmental Research Letters.

Hot cities pose serious challenges for policymakers in a warming planet. Heat is already a big killer, accounting for more deaths each year in the United States than storms, floods and lightning combined, the study says. 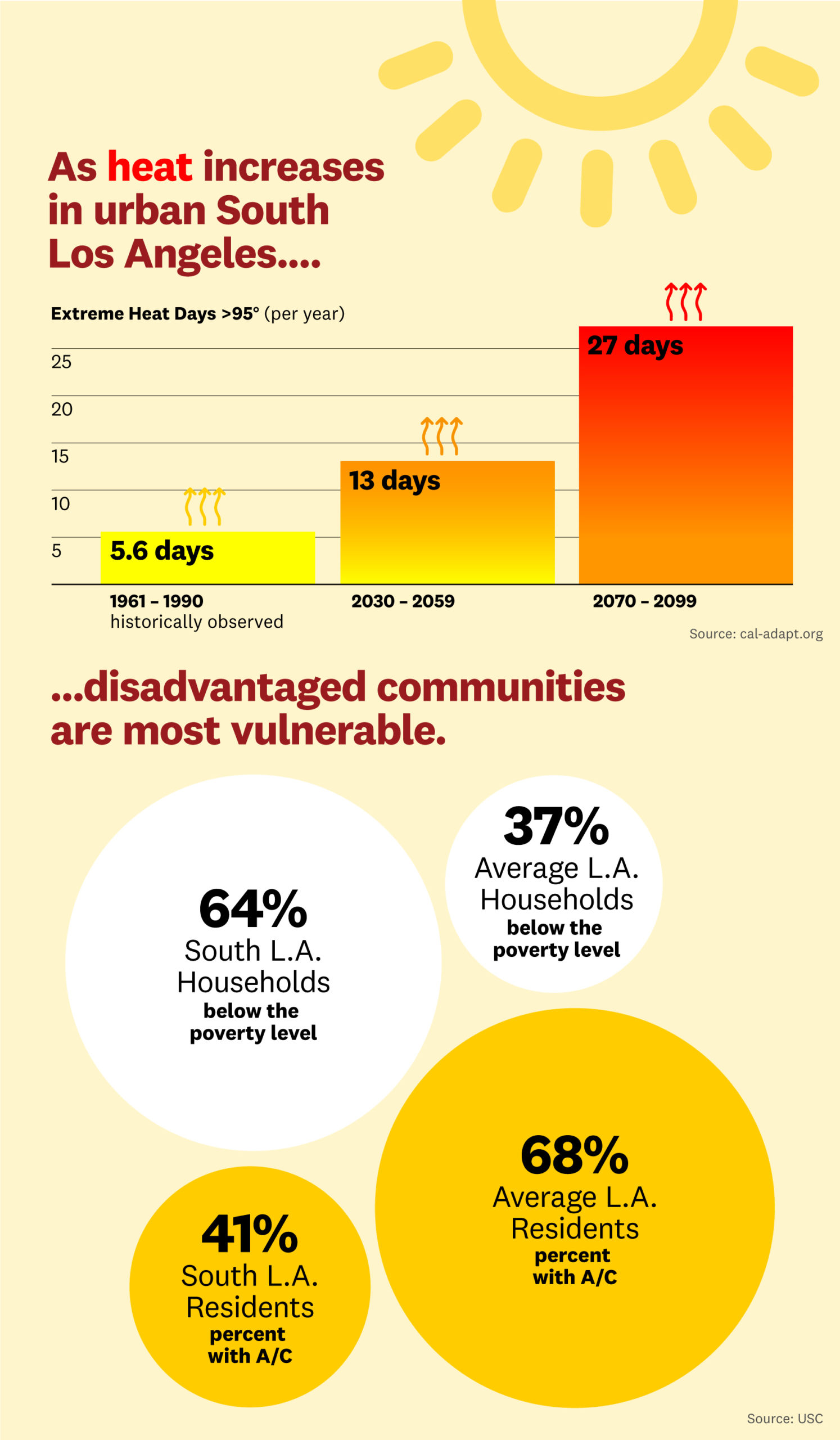 Last year was the second hottest year on record, according to the World Meteorological Organization. The United Nations reports thousands of heat-related deaths or hospitalizations annually, raising concern among public health officials as extreme temperature events grow in intensity, frequency and duration.

Cities are becoming more crowded, too, as more than half of the world’s population now lives in metro areas. The portion is forecast to grow to nearly 70% in 30 years. And cities face a double whammy due to an urban heat island effect, which occurs because the built environment retains more heat than natural environments.

Those trends pose challenges for electricity infrastructure and peak electricity management, underscoring the need to identify vulnerable communities. To anticipate future cooling needs, the study quantifies where urban warming is expected to increase air conditioning and energy use.

The USC research team turned to big data to tackle the problem.

First, they utilized smart meter data for 180,476 households in Southern California. Then, they quantified the increases in residential electricity use per degree of warming for census tracts in the region; that resulted in analyzing 3 billion electrical consumption records. They also created a method to estimate the prevalence of air conditioning units, which showed that the units are less common in poorer census tracts. Next, they utilized global warming projections for the region for 2070-2099.

“Our research suggests that more than half (55%) of the census tracts identified as most vulnerable are expected to experience more than 16 extreme heat days above 95 F per year by the end of the century,” said George Ban-Weiss, an author of the study and professor of civil and environmental engineering at USC Viterbi.

Many communities clustered in southern L.A. — including Lynwood, Compton, Inglewood and South Gate — lack the advantages to cope with hot temperatures found in other parts of the region, making them more vulnerable to extremes, the study shows.

The study offers rich detail and data, as the analysis accounts for census tracts across Southern California — data only made possible by advances in electricity meters.

“Before we had these household-level smart meter data, we couldn’t locate the most vulnerable communities and where help is needed most,” said Mo Chen, lead author of the study and a doctoral student at USC Viterbi.

The study underscores a growing body of research that shows the uneven impacts of global warming. For example, across Southern California, coastal communities are somewhat buffered by the ocean while wealthy communities can afford more energy use and many homes in inland valleys mostly have air conditioners installed.

“The findings are useful from a policy perspective because they give policymakers information to direct resources — such as public funding, weatherization programs and cooling centers — towards the vulnerable populations that will be most negatively affected by extreme events in the future,” Sanders said.

As temps soar, USC experts have hot ideas on what it means for us

Sweltering conditions can have an effect on flights, pollution and your health.

Want to use solar, but you rent an apartment? You can still go green

The first step is to go after the “low-hanging” fruit of carbon reduction: energy efficiency.

The U.S. energy system uses a lot of water — but exactly how much?

Two researchers crunch the numbers to determine the enormous amount of H2O withdrawn from the environment.

L.A. mayor wants to lower city’s temperature, and scientists are figuring out how to do it

The city has already teamed up with USC environmental engineer George Ban-Weiss, who says there is no better place to test different ways of reducing urban heat.