Joining a tradition that stretches back a decade, President Carol L. Folt honored members of USC’s military, veteran and ROTC community during an evening of remembrance and celebration.

The 2020 USC Veterans and ROTC Gala drew hundreds of military and veteran students, faculty and family members, along with ROTC members, at the downtown Los Angeles Westin Bonaventure on Thursday night.

This year’s gala was the first of Folt’s tenure. Its rituals ranged from the somber to the amusing, as MIAs were honored in the same evening as the lighthearted “tasting of the beef” protocol, in which the outcome is predetermined (despite whatever the sampler tastes, the dinner’s main course is deemed fit to consume).

“It’s our greatest hope to make sure that our active duty service members, veterans and ROTC students thrive and feel at home as USC scholars,” Folt said. “We want them to feel, at all times, that they are with their family.”

USC is recognized as one of the top highly selective research universities for veteran and military students, thanks in part to the generosity of USC’s participation in Yellow Ribbon funding for student veterans.

“You reflect our nation at its best,” Folt said. “You have protected Americans for generations, and we’re so grateful to you.”

In April, USC will celebrate the university’s 80th anniversary with the Navy ROTC.

USC has over 220 ROTC students, 62 of whom are women and 92 of whom are first-generation college students. USC’s partnership with the ROTC has lasted more than a century without a break, even during the tumultuous years of the Vietnam War when some universities severed ties.

“Your service sets a high standard and earns you a special place in the Trojan Family,” Folt said. “We thank you for all you’ve sacrificed in your deep service to our nation.” 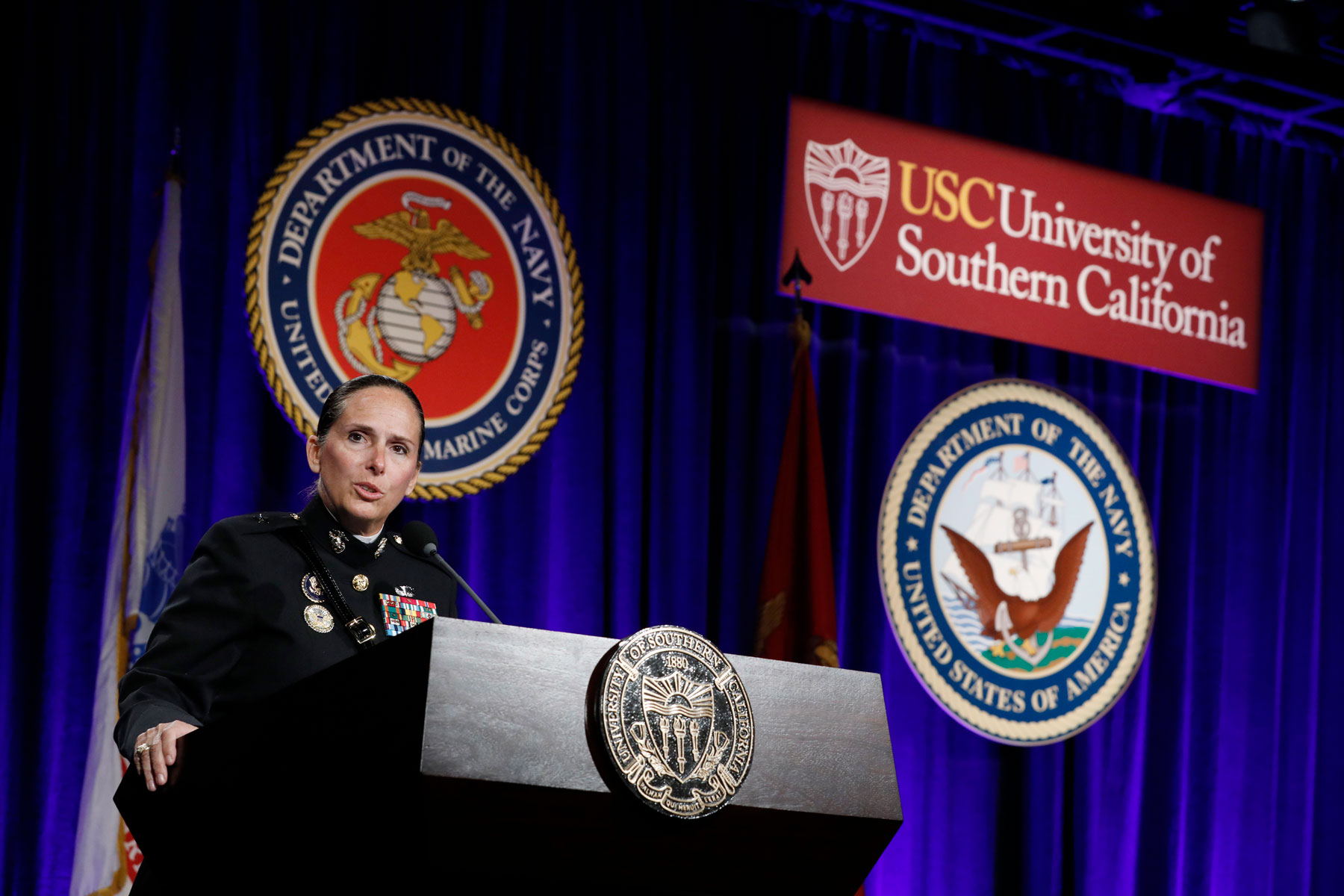 “When a chance encounter with a Marine recruiter led to them asking me, ‘Are you ready to be a Marine?’ I said yes,” Shea said. “It was the best thing that ever happened to me. When I showed up at boot camp, it was like coming home.”

The event recognizes hundreds of USC veterans and their spouses and ROTC cadets and their officers.

USC President Steven B. Sample and Edward P. Roski Jr., ’62 chairman of the USC Board of Trustees, saluted the more than 700 USC students, faculty and staff members associated with the U.S. armed forces at a gala dinner on March 3 at the Westin Bonaventure Hotel.