A new mural design unveiled Thursday at the USC Center for Black Cultural and Student Affairs — the first to adorn the center’s walls — has been months in the making, with the goal of both commemorating Black History Month and encapsulating feelings of empowerment and black excellence at USC.

Last fall, discussions around what would be featured in the mural began. The students that frequent the Center for Black Cultural and Student Affairs packed the room on a December night to discuss the project. Their feedback was important, as it was the beginning of a brand-new process to bring art into the CBCSA.

“This is their space, and we wanted their input as to what’s on the mural and what’s important to them,” said the center’s director, Greedley Harris III. “What does the black Trojan experience look like?”

Everyone agreed that including the voices of the students and staff that frequent the center was necessary. Lead artist Amani Holbert, a South Los Angeles native, was tasked with capturing that essence.

Holbert teamed with USC student and artist Keviette Minor and a dozen local youth artists chosen for the project by community partner L.A. Commons. They held brainstorming sessions with the students that hold the CBCSA near and dear to their heart.

“During the first workshop I attended, I had the opportunity to meet some of the students,” she said. “It was really interesting to hear their perspective on being black students on campus. Having attended a predominantly white institution myself, I could relate to a lot of their experiences and their stories. I quickly realized how meaningful the CBCSA is to the students.”

The mural, which will be completed in March, features powerful images that are relevant to USC’s black students. The accomplished African American alums included are Wanda M. Austin — who as interim USC president was the first African American and woman to lead the university — along with film director John Singleton and USC’s first African American graduates, John and Vada Somerville. It also features Fluor Tower — home of Somerville Place, an important landmark for black students on campus — and honors the late Victor McElhaney, a frequent visitor to the CBCSA.

Minor emphasized the impact the CBCSA has had on her student experience.

“I’m in my third year at USC, and I can honestly say that I would not be at this school if it wasn’t for the CBCSA,” she said. “There were so many times when my experience on campus was just very trying. Having a space where you could come, be yourself, and be around other students that look like you and are going through the same experiences that you are, was very important to me.” 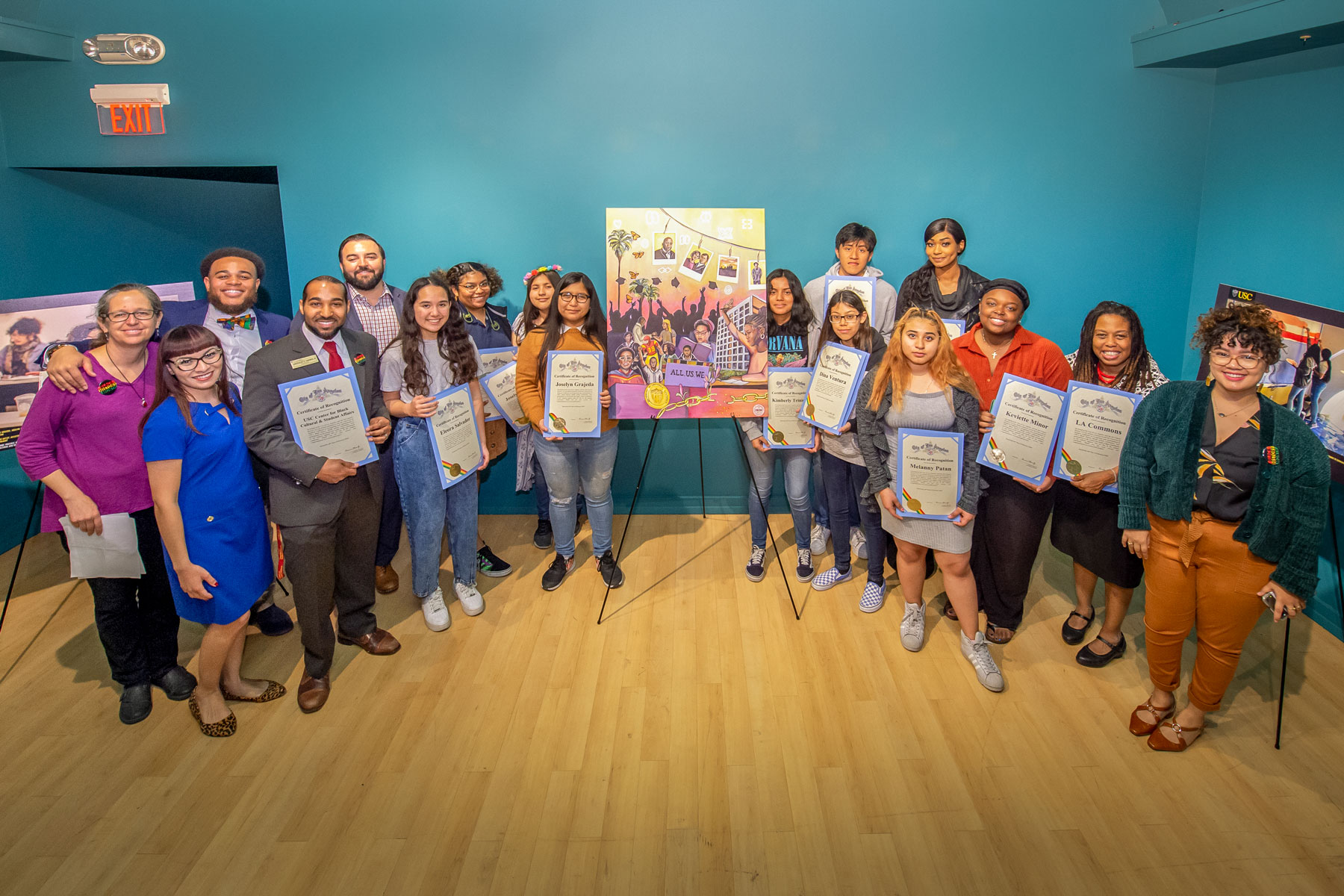 Local youth artists participated in the project, which will be completed in March. (USC Photo/Gus Ruelas)

A national movement for ethnicity-based student services led to its creation four decades ago.

Images for the banners were created by local high school students and painted by a muralist.

Custom-designed banners created by young artists and a famed muralist are honored at City Hall.

For many of USC’s cultural centers, 2012 marks a milestone year.