With the Iowa caucuses about to kick off state primaries in just a few days, a national USC Dornsife/Los Angeles Times poll shows former Vice President Joe Biden retaining the Democratic primary lead ahead of Sens. Bernie Sanders and Elizabeth Warren by a nearly 2-to-1 margin.

Results from the first poll of 2020 reflect some important changes in the primary contest, including the late entrance of former New York City Mayor Michael Bloomberg. Notably, the results show Biden retaining a strong lead among the Democratic primary candidates, said Robert Shrum, director of the Center for the Political Future at the USC Dornsife College of Letters, Arts and Sciences.

“These numbers show Joe Biden’s continuing strength. If he wins in Iowa, he has a pretty good path to the nomination,” Shrum said. “But if Biden performs poorly in the Iowa caucuses and the New Hampshire primary, it remains to be seen if this support is a firewall against early losses.” 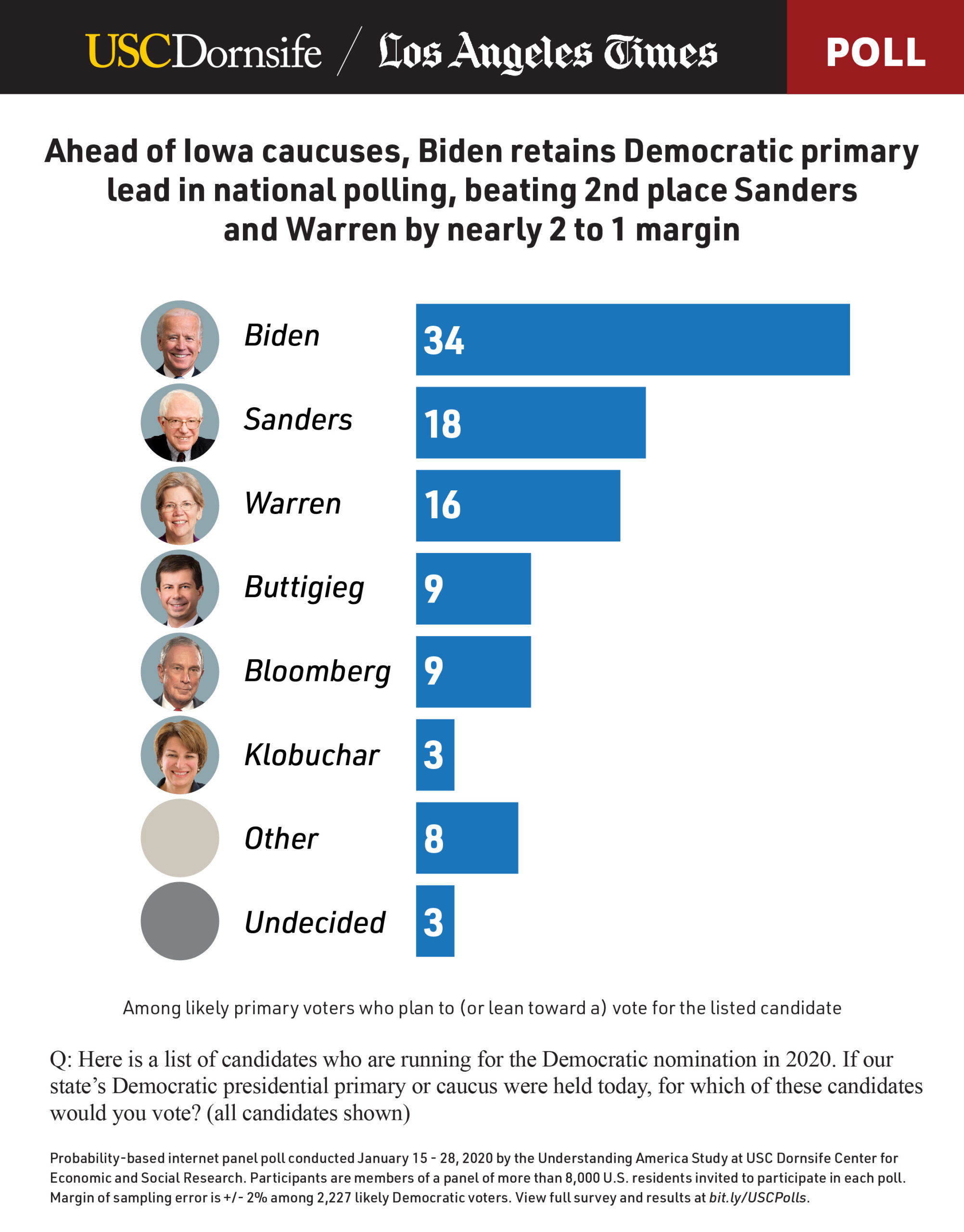 The matchups between President Trump and Democrats

“It’s significant that Trump is only at about 40% of support against any of the Democrats we tested. Against Joe Biden, Trump is in landslide loss territory,” Shrum said.

Mike Murphy, co-director of the Center for the Political Future, said the results show the surprising potential strength of Sanders if he were to face Trump in the general election.

“I think it’s significant that Bernie Sanders is beating Trump in this poll. The idea that Bernie is a stone-cold campaign loser against Trump is not what this poll is saying,” Murphy said. 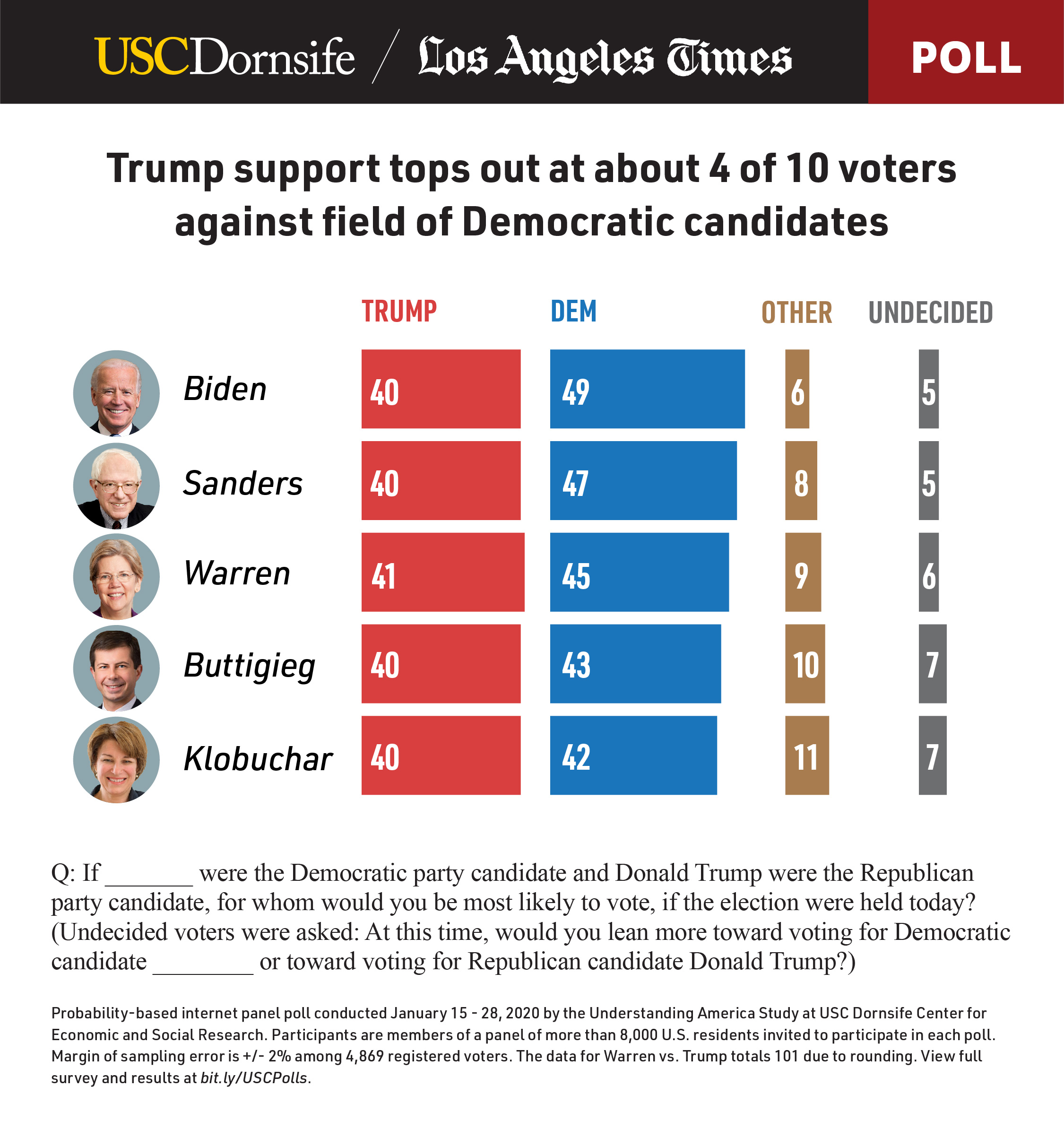 What happened to support for women candidates?

“The race for the Democratic primary started out with a widely diverse field of candidates, including several potentially strong women,” said Jill Darling, survey director for the poll. “Our polling shows, however, that Democrats’ fear of a second Trump win has seemingly overcome any potential for identity voting; one example of that is women are not overwhelmingly backing female candidates.”

“We had a whole primary campaign play out and a dispute over whether Sanders said a woman couldn’t win. During the ensuing dust-up, there’s been no drive of women voters toward either Warren or Klobuchar,” Shrum said. “We see also it when we look at these matchups against Trump.”

“Among women voters, Biden and Sanders are doing better against Trump than either Warren or Klobuchar,” Murphy said. “There’s this equation you read about in the punditocracy that women voters vote for women candidates, and it’s not what voters are telling us.”

Fewer men support either female candidate, the poll showed, with 13% backing Warren and 3% for Klobuchar. 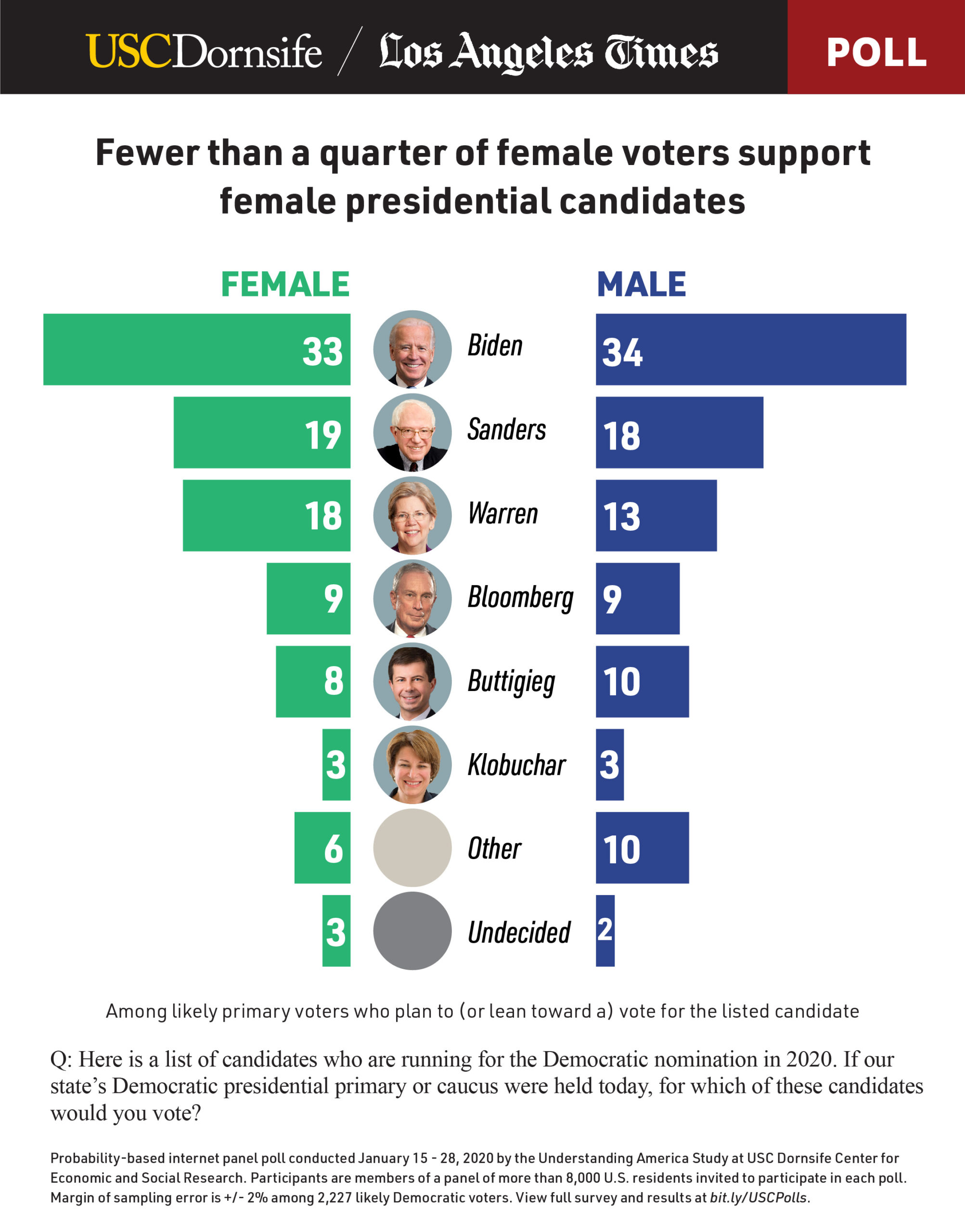 Among Democratic primary voters and independents who lean toward voting Democratic, 67% of those who say they are voting for their candidate because he can win against Trump in the general election chose Biden. Only 8% of those voters chose Sanders and 5% chose Warren.

Just over one in four (27%) of those who are voting for a candidate who shares their values chose Warren, compared to 20% of that group who back Sanders. Only 7% of values votes chose Bloomberg.

Sanders and Warren split voters who want a candidate who can bring change, garnering roughly one third of the vote each, compared to 15% who chose Biden.

“Bernie Sanders voters don’t say winning is the most important thing, reminding me of the support for other candidates who were perceived to be incredibly unelectable at the beginning of their campaigns,” Murphy said. “Both Ronald Reagan and Donald Trump wound up getting elected. The ghosts of primaries past are rattling their chains here.”

How bored, excited, anxious and enthusiastic are voters?

Biden, Warren and Sanders voters are more excited about the Democratic primary and enthusiastic about the choice of Democratic candidates than voters who back other candidates, the poll found. Biden voters are the least anxious or worried about who will be nominated (53) compared to most other candidate voters, who averaged between 42 and 49.

Methodology: The sample of 5,862 U.S. residents, including 5680 eligible voters, participated from Jan. 15 to Jan. 28, 2020. The sample includes 4,869 registered voters, and 2,227 voters deemed likely to vote in the Democratic primaries and caucuses. They are members of USC Dornsife’s Center for Economic and Social Research’s Understanding America Study (UAS) probability-based internet panel. The poll was conducted in respondents’ choice of English or Spanish. The overall margin of sampling error is +/-2 percentage points for all eligible voters, registered voters, and Democratic primary likely voters. Margins of sampling error for other subgroups may be higher; these are provided in the associated crosstab release. Numbers may not add to 100% due to rounding.

Information about the poll, including methodology, question wording and results, as well as the archive of results of prior USC Dornsife/L.A. Times polls, are available online.

The latest USC Dornsife/L.A. Times poll also finds that, if the House does vote to impeach the president, 45% of Americans support the Senate removing him from office.