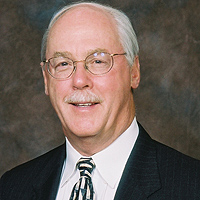 USC Trustee and alumnus Daniel J. Epstein “decided that this should be a family thing.”

USC Trustee Daniel J. Epstein ’62, an honors graduate of the USC Viterbi School of Engineering, has made a $4 million lead gift to create a new headquarters for the USC Alumni Association.

In addition, for the first time ever, USC’s alumni volunteers � many of whom spend many hours each week on campus � will have their own space.

The center will include two conference rooms, named for Scott Watt ’68 and for Alexander ’77 and Linda Cappello, as well as an “executive lounge” area where volunteers can socialize and relax between meetings.

According to Scott Mory, associate senior vice president for alumni relations, the center will open up tremendous opportunities for the university’s alumni programs.

“It puts alumni relations right at the heart of campus, creating synergies between alumni relations and student groups,” he said. “It also greatly expands our facilities for creating programs and services benefiting the entire USC alumni family.”

When it opens in September 2010, the Epstein Family Alumni Center also will make way for a transformation of the university’s historic original building. Plans call for the ground floor of the Widney Alumni House to be converted into an exhibition space dedicated to Trojan history.

The namesake of USC’s first named department � the Daniel J. Epstein Department of Industrial and Systems Engineering � Epstein is founder and chairman of San Diego-based ConAm Management Corp., one of the nation’s top 10 apartment-management/development and ownership firms, with a portfolio of 50,000 units.

Epstein directly attributes his professional success to the education and exposure he gained as a student at USC. The engineering curriculum in particular was tough, he said, but it gave him the background to launch a successful business as well as the drive to succeed.

After graduating from USC in 1962, Epstein held leadership positions with several major construction companies before founding ConAm in 1975. He had been living in San Diego for some time when a visit from former USC engineering dean Leonard Silverman motivated him to reconnect with his alma mater. “I couldn’t help but be excited,” he said, “about the direction the school was taking.”

In 1994, Epstein was honored with the USC Viterbi School of Engineering Alumnus Award, and in 2002, he gave $11 million to endow his old department. Provost C. L. Max Nikias, then dean of engineering, called that gift the largest-ever from an individual to a university-based industrial and systems engineering department.

As Epstein described it, the seeds for this most recent gift were planted some six or seven years ago, when he served a one-year term on the USC Alumni Association board of governors.

“We spent quite a bit of time conceptualizing what USC should have in the way of a new alumni house � where it should be, how it would fit in with the rest of the university and what other schools had done,” Epstein recalled. “Everyone got excited about it and agreed that it was something we needed to do.”

Although the vision wouldn’t take shape for years to come, Epstein began thinking that this might be a project he could support in a meaningful way.

In 2002, Epstein was elected to membership on the USC Board of Trustees. As chairman of the board’s Alumni Affairs Committee, he was in an ideal position to monitor progress on the alumni center plan.

“Things began to line up,” he said. “They got the campus center under way, and they recalled my interest, and when they approached me about whether I would be willing to play a role, that really got my attention.”

For Epstein, the naming of the new center was a matter of particular significance. “Given my involvement with the school � my being an alumnus, my son being a graduate of USC, my daughter having earned her master’s at USC, and my son-in-law being enrolled in graduate studies at the university � I knew that this would be a very special gift. I also have three grandchildren, all of whom, of course, will go to USC. So I decided that this should be a family thing.”

For his exemplary service to the university, Epstein will be honored with an Alumni Service Award at the USC Alumni Association’s 75th awards gala next month.