When you see someone being unfair, disloyal or uncaring toward others, do you feel a sense of moral outrage in the form of a twisting stomach, pounding heart or flushing face? And is it possible that your body’s response depends on your political affiliation?

Researchers with USC’s Brain and Creativity Institute set out to examine how and where emotions associated with violations of moral concerns are experienced in the body, and whether political orientation plays a role.

“Our study finds that liberals and conservatives feel moral violations in different areas of their bodies, interpret them as distinct complex feelings and make different moral and political judgments,” said Morteza Dehghani, assistant professor of psychology and computer science at the Brain and Creativity Institute and the USC Dornsife College of Letters, Arts and Sciences. “This was particularly true for perceptions of feelings of loyalty and purity.”

The research was published today in Psychological Science.

Prior research has shown liberals and conservatives rely on different moral foundations and react differently to violations of morals. The authors say their study is the first to indicate that political orientation influences where and how violations of specific moral concerns — including care, fairness, purity, loyalty and authority — are felt in the body. For example, liberals feel violations of purity in their crotch area, chest and slightly in their heads while conservatives feel these violations almost exclusively — and very strongly — in their heads.

Our study finds that liberals and conservatives feel moral violations in different areas of their bodies.

The results are part of a growing body of research on psychological and physiological differences between liberals and conservatives and adds to the growing scientific body of work on how morality is linked to emotions.

“These findings suggest that at least some of these differences can be attributed to the basic emotional processes, which seem to function somewhat differently according to political affiliation. In addition, our results highlight a considerable amount of overlap in Republicans’ and Democrats’ emotional responses to moral transgressions,” said Mohammad Atari, the first author of the paper and a third-year PhD student at USC Dornsife.

It’s widely accepted that the sensing of physiological feedback from the body and its visceral organs is essential for emotional experience, but psychologists have only recently identified the distribution of emotion-related body sensations — or “feeling space” — by distinct maps.

Some emotions are associated with more activity in certain body parts, like a quickening heartbeat, while other body regions might be “deactivated” in the same emotional experience. Fear, for example, is represented by activity in the chest and head area, while sadness may accompany slight activations in the chest and deactivations in lower limbs.

The researchers wanted to take this emotional mapping to another level by examining the body’s sensations and emotions in reaction to moral outrage. They also wanted to study whether identification as conservative or liberal could predict where people experienced these emotions.

Study participants rated their political affiliation with the Republican or Democratic Party and ranked their conservatism on a scale ranging from 1 (very liberal) to 7 (very conservative). Researchers then used these to assign a political orientation score. Higher scores indicated someone was more conservative.

Researchers used a detailed questionnaire to assess the degree to which participants deemed different considerations as relevant when making moral judgments and their agreement with statements about morality. Participants were scored on their moral concerns of care, fairness, loyalty, authority, and purity.

Participants were randomly assigned to read scenarios involving moral violations, such as someone avoiding sitting next to an obese person on a bus. They were asked to rank on a scale of 1 to 5 how morally wrong it was and the strength of their emotional response to the behavior. Next, they were asked to draw key aspects of their experience on two highly detailed silhouettes of the body, demonstrating areas where feelings were stronger or faster and areas where feelings were weaker or slower. 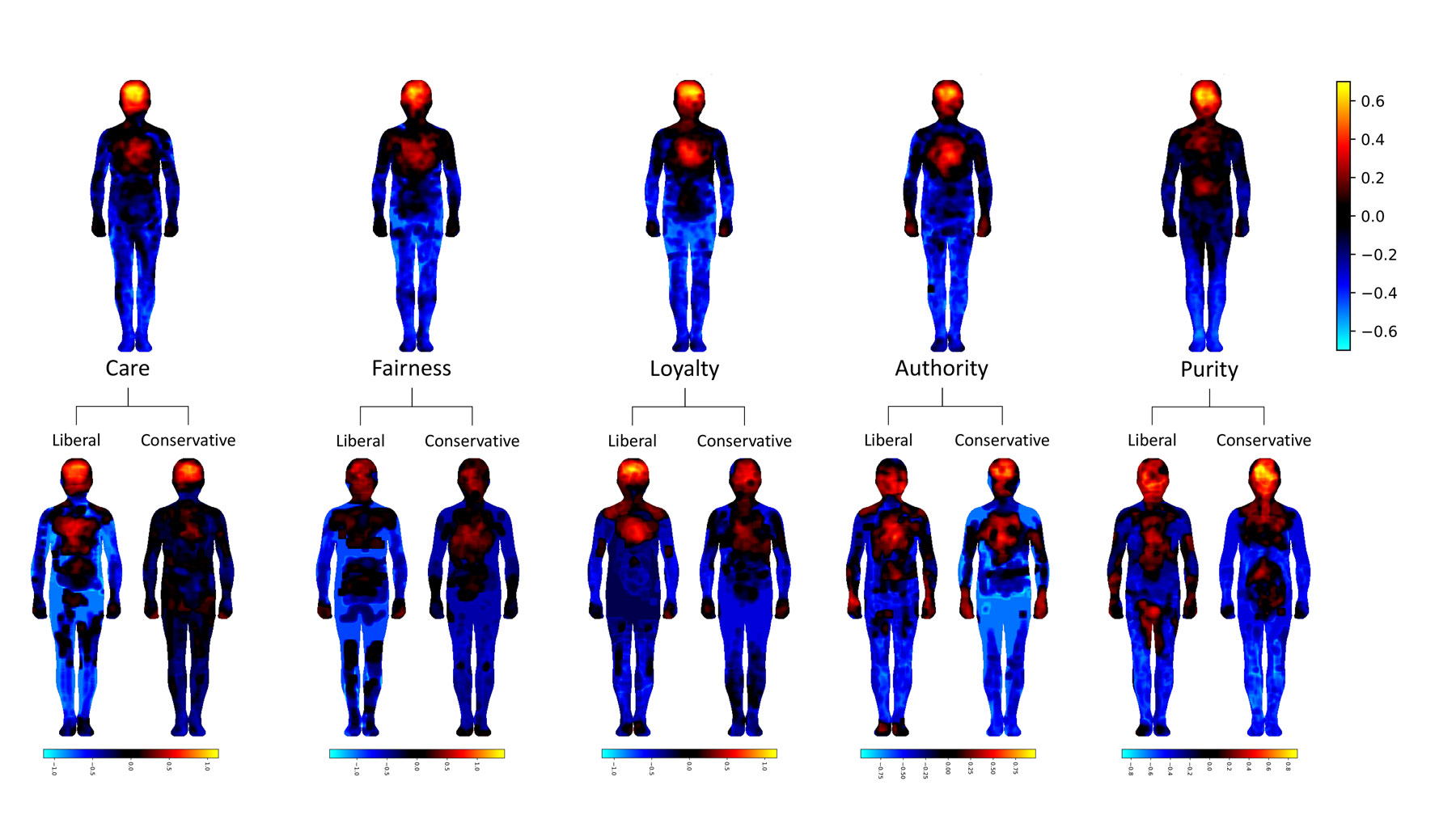 Researchers used the drawings to compute individual-level body sensation maps. The results showed that different moral violations are felt relatively similarly across the five moral concerns. However, scientists observed some important differences when they compared how feelings were experienced among liberals and conservatives.

The authors replicated their results in a second, nationally stratified sample, and found those results were fully consistent with the main study.

Moral outrage: Is it all in your head?

Many feelings associated with moral violations consistently showed up in the same areas of the body. Across moral violations, the head and face area were highly activated and were paired with varying levels of activation in the chest.

“The consistent activation observed in the head area suggests that people subjectively associate moral violations with high-level cognitive processing ‘in their head,’” Dehghani said. “This didn’t surprise us, as moral violation scenarios require a high level of cognitive and emotional processing, as well as an evaluation of standards of right and wrong.”

Additional authors include Aida Mostafazadeh Davani, a PhD student in computer science at USC Dornsife and the Brain and Creativity Institute.

Purity unites and divides — it also keeps us together and apart

USC-led study of moral values reveals issues related to purity can determine how close — or how far — we want to be with someone in social and political circles.

There is something universal about what happens in the brain when it processes tales, regardless of a person’s origin.

These days, facts aren’t always enough to win an argument. Find out where our beliefs come from and why they’ve become even harder to change.