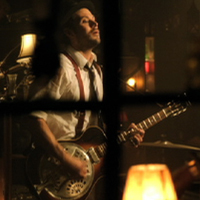 Director John Thompson, producer Tess Ortbals ’07 and cinematographer Matt Eagan ’06 collaborated on “The Gift,” by the band Rocco and the Burden.

When Heineken USA sponsored a contest last fall to create short music videos, the event had a long-term effect on the USC School of Cinematic Arts graduate students who took part, exposing them to production possibilities they might not have previously considered.

“I knew where I wanted to wind up when I left the school, but I didn’t really know how or where I was going to start,” said Claire Sullivan Tailyour, whose initial goal when she came to USC was to make documentary films.

Serving as the director on the video for the Low Stars’ song “Just Around the Corner,” which finds the trio performing its song against an array of Los Angeles landscapes, Tailyour said she found a new avenue for her talent.

“It’s been a great testing ground with experiences that we can later apply to larger projects. Working on this production has really helped set me on a tangible path in the industry.”

Joined by her classmates and producers Coyote Marino and Jon Miller, the three graduating MFA production students’ pitch was among two of 150 proposals submitted by Film & Television Division MFA students.

The other winning team � soon-to-graduate director John Thompson, producer Tess Ortbals ’07 and cinematographer Matt Eagan ’06 � created the alluring visuals for “The Gift,” performed by the band Rocco and the Burden. Brenda Goodman and Jeffrey Obrow served as faculty advisers.

“All of us advanced our skills and really grew professionally in a way that we wouldn’t have on a larger project,” said Marino, who noted that he was extremely grateful for the opportunity to get his group’s work in the public eye.

“Five years ago you made something and no one ever saw it. With the demand for short projects only due to increase, music videos are a great place to try new things and build our skills.”

Miller, the video’s director of photography, was so taken by the format that he recently formed his own video production company, House of Waterman, where Tailyour works as a director.

“This experience has been exactly what USC has taught us, and that is that you can’t make a film alone, not even a video,” Miller said. “It’s a collaborative art form and that’s key.”

Thompson said, “This was the first time I really let my imagination go wild. In terms of (being) a director, it was an important step because I’m now more confident about doing larger projects. This felt like the last bit of training wheels that I needed.”

Producer Marino said, “In the cluttered media world we live in, you have a choice to grab someone’s attention for three minutes or for two-and-half-hours, and it’s especially important with a short format that you engage people really quickly.

“Music is a great way to do that. If people like the song, they’re going to stick with it.”

Miller added, “You’ve got so much more media to choose from, but it’s still hard to find content anyone wants to watch. I mean, you can only look at just so many cats playing piano.”