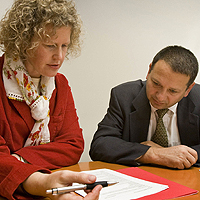 Archaeologists Lynn Swartz Dodd of USC and Ran Boynter of UCLA brought together leading archaeologists from Israel and Palestine to create a plan that would protect the region’s archaeological treasures once a peace deal is reached.Photo/Reed Hutchinson

Israelis and Palestinians may not be able to agree right now on their present or future, but if a pair of Los Angeles archaeologists have their way, they soon will see eye to eye on their past.

Working tirelessly for the past five years, Ran Boytner, a UCLA archaeologist, and Lynn Swartz Dodd, an archaeologist at USC, have guided a team of prominent Israeli and Palestinian archaeologists to arrive at the first-ever agreement on the disposition of the region’s archaeological treasures following the establishment of a future Palestinian state.

“Israelis and Palestinians never previously had sat down to achieve a structured, balanced agreement to govern the region’s archaeological heritage,” said Dodd, a lecturer in religion and curator of USC’s Archaeological Research Collection. “Our group got together with the vision of a future when people wouldn’t be at each other’s throats and archaeology would need to be protected, irrespective of which side of the border it falls on.”

With dozens of high-ranking Israeli, Palestinian, U.S. and international statesmen and Palestinian archaeologists already aware of the Israeli-Palestinian Archaeology Working Group Agreement, the 39-point document now faces its toughest audience: Israeli archaeologists whose country would cede control of more than tens of thousands of artifacts and hundreds of sites.

“We’re talking about putting your precious archaeological heritage � things you believe your ancestors created � in the hands of what you now consider to be your enemy,” Dodd said. “We’re asking enemies to become partners.”

“That, for the (Israeli) right wing, would be a major rallying point to oppose the peace process. Therefore, archaeology could be a deal-breaker in future peace negotiations. But if we can deal with archaeology, we can help create a stable peace process that will be respected by both sides for years to come.”

While the agreement does not spell out the disposition of specific sites or artifacts, it has implications � depending on how borders eventually are drawn by statesmen � for a wide range of cultural lightning rods located in or excavated from Israeli-occupied territories, including a religious compound thought to be involved in the production of the Dead Sea Scrolls (Qumran), the capital of the ancient Kingdom of Israel (Samaria) and an important archaeological site (Mount Ebal) celebrated by Israeli settlers as the spot where the Old Testament leader Joshua built an altar to the Jewish God in thanks for allowing the Israelites to cross the Jordan River and reach the Promised Land.

In addition to international law on the repatriation of artifacts from occupied territories, the document is based on such democratic principles as equal protection for archaeological treasures of all cultures and unfettered access to sites and artifacts for the public and scholars, without regard to their ethnicity or religion.

The agreement also borrows from concepts floated in previous peace processes, including general concepts from the Israeli-Egyptian Peace Treaty of 1979 and the Tentative Taba Agreement of 2001.

The negotiating team presented its case to 200 Israeli archaeologists today at a four-hour conference at the Van Leer Institute, a Jerusalem nonprofit dedicated to enhancing and deepening Israeli democracy.

Among the document’s specific recommendations:

� Repatriation of artifacts excavated since 1967 in the Occupied Territories to the state in which they were originally found. Currently, the Israeli Archaeological Authority and the archaeology staff officer of the Israeli military’s Civil Administration maintain control of all archaeological material excavated in Israel and some from the West Bank.

� More than tripling of the footprint of that part of Jerusalem that would qualify for special protections as a UNESCO World Heritage Site to include the city’s boundaries during the 10th century, or roughly the era of the Crusades. Currently, such status extends to a one-third-square-mile area that includes the Temple Mount, the Western Wall and the walls of Jerusalem’s more than 2,000-year-old Old City.

� Consideration of archaeological sites that will straddle future international borders proposed under a peace plan to ensure that these borders do not divide or harm archaeological remains.

� Support for the establishment of museums, labs and storehouses for the protection, study and care of archaeological heritage where they currently do not exist, so that repatriation of materials to territories occupied by Israel in 1967 does not stall for the lack of such facilities.

“These are the principles that we need to govern how we address and preserve archaeological heritage that’s of interest to both sides, irrespective of what border it falls within,” Dodd said.

In a parallel effort, the team spent three years tracking down and itemizing more than 1,500 sites and tens of thousands of artifacts that would fall into a legal limbo if a two-state system were adopted, as previous peace plans have suggested.

Assembled through investigation of scholarly reports about the excavations, the use of Freedom of Information Act requests and, finally, legal action, the resulting electronic database also includes the current location of artifacts removed from the West Bank and East Jerusalem, including those removed from the Rockefeller Museum, an East Jerusalem archaeological museum that houses a large collection of artifacts unearthed in excavations conducted in Palestine beginning in the late 19th century.

The information now is available on request to researchers, policymakers and politicians, but the team hopes to make it available soon over the Internet.

“When negotiators come in, they will know what to talk about specifically,” Boytner said.

At issue is control of all archaeological material recovered inside the borders of a future Palestinian state. Palestinians have expressed the desire to control such resources within their boundaries. But since the 1967 War, Israelis have excavated extensively in the West Bank, deciding where to excavate and then removing the artifacts to storage facilities controlled by the Israeli Civil Administration.

Yet, as much as Palestinians have expressed the desire to control such cultural heritage, they also can view preservation efforts with suspicion.

“Archaeology sometimes has been used as a reason to curtail the natural expansion and refurbishing of Palestinian villages and towns,” Dodd said.

Participants credit Israel-born Boytner, whose expertise is actually Andean archaeology, with getting the ball rolling. Long fascinated with “the role politics plays in archaeology in one of the greatest conflicts on earth right now,” he decided to pursue an agreement following a chance meeting with an assistant to a leading negotiator for the Israeli government.

Boytner was surprised to learn about the lack of progress on cultural heritage in past peace negotiations.

“Nobody was doing anything about it,” he said. “This was off the radar for everyone.”

With the help of Dodd, who also studies the role of politics in interpreting the past, Boytner enlisted six of the region’s most prominent working archaeologists and ultimately involved 10 institutions from around the world.

To bankroll their activities, the team raised more than $150,000 in funds from a range of public and private donors, including USC, UCLA and the U.S. Institute of Peace, an independent, nonpartisan institution established and funded by the U.S. Congress with the goal of helping to prevent and resolve violent international conflicts.

Palestinian archaeologists already have expressed support for the document’s provisions, which are now on file with the Israeli and Palestinian governments, the U.S. Department of State and former British Prime Minister Tony Blair, who is now the official envoy of the Middle East diplomatic “quartet” � the four outside entities (the United Nations, European Union, United States and Russia) involved in mediating the peace process for the Israeli-Palestinian conflict.

Of the five years so far devoted to the project, three have been spent in sometimes tense negotiations. On three occasions, in fact, professional facilitators were employed to keep discussions moving. But the team continued to meet � a total of four times over three years, in three different countries � often making the most headway over meals shared between the sessions.

Stakes were high for the three Palestinian and three Israeli archaeologists who lent their expertise to the project.

“People who participated did so at great risk, professional and personal, to themselves,” Boytner said. “It’s not unheard of for Palestinians who are caught negotiating with Israelis to be treated as traitors, some being dragged to the street and shot dead. For the Israelis, it’s not unheard of to be branded as traitors and therefore being denied positions or being fired or basically being blackballed.”

Added Dodd, “The collaboration and investment in future peace made by our Israeli and Palestinian colleagues should be highlighted. They are the ones who made the radical choice to envision a shared future by joining this process and working together. Their role as peacemakers deserves emphasis.”

To this day, only two participants � Rafi Greenberg, a lecturer in archaeology at Tel Aviv University, and David Ilan, director of the Nelson Glueck School of Biblical Archeology at Hebrew Union College in Jerusalem � have agreed to be publicly identified.

The other four have remained anonymous, fearing reprisals. Yet they all see themselves as private citizens trying with the only tool they have at hand to contribute to a process that so far has stumped professional statesmen.

“Even though we are archaeologists, we are peacemakers first,” Boytner said.

Digging for peace in the Middle East