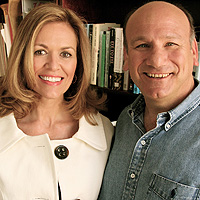 Two prestigious new grants, including a grant to USC from the Bill & Melinda Gates Foundation, are expanding the scope and ambition of Hollywood, Health & Society, the pioneering health communication program working with the television and film community, now in its seventh year at the USC Annenberg School for Communication’s Norman Lear Center.

A three-year grant of more than $1.37 million from the Gates Foundation will enable the society to develop an entertainment-education strategy to increase U.S. public support for global initiatives to reduce health disparities and disease around the world.

Main goals of the new effort include increasing the accurate presentation of global health topics such as HIV-AIDS, tuberculosis and malaria in popular prime-time TV shows, and increasing understanding and support among TV viewers of global health programs that can save lives and reduce disease, especially in Africa.

A two-year grant of nearly $500,000 from The California Endowment will enable Hollywood, Health & Society to develop an entertainment-education program that supports the endowment’s priority to advance effective policies and programs to help build communities that support children, youth and families.

Through a focus on storylines about how neighborhood environments affect health and critical issues such as obesity prevention, the prevalence of violence and health disparities, Hollywood, Health & Society will seek to increase both awareness of these issues and comprehensive policies to address them.

“Film and television have the power to educate and inspire,” said Joe Cerrell ’91, director of global health policy and advocacy for the Gates Foundation. “The Norman Lear Center’s Hollywood, Health & Society program has a proven track record of working with top writers and producers to build awareness of critical health issues. We are delighted that the Lear Center is expanding its work to inform the public about solutions to major global health challenges such as AIDS and malaria.”

Robert K. Ross, president and chief executive officer of The California Endowment, said, “We know that we need to level the playing field between communities so that children can achieve and prosper; that we should prevent problems in communities before they happen by tackling community health; and most of all that we can be more ingenious about how we solve health problems in communities.

“But the way forward can be a difficult story to tell, and the media is a powerful tool to help us see solutions in action. We’re excited to partner with Hollywood, Health & Society to show that there are policy and systems changes that help build healthy communities for the long haul.”

Formerly vice president of the Centre for Development and Population Activities in Washington, D.C., Buffington guided the flagship WomenLead program to equip, mobilize and empower women globally and nurtured a network of 5,000 alumni in 140 countries.

With USAID, she led the development of a $250 million strategic framework for global health leadership and management and managed a $108 million portfolio of strategic communication programs worldwide.

Buffington coordinated the first international Entertainment for Social Change conference at the USC Annenberg School to leverage the power of the entertainment industry for social transformation worldwide.

She is a former associate faculty member at The Johns Hopkins University Bloomberg School of Public Health and a past board member of the Pan American Health and Education Foundation.

“I am pleased we have been able to recruit Sandra Buffington to lead this program into the future,” said Ernest J. Wilson III, dean of the USC Annenberg School. “She has unparalleled experience in using entertainment-education to build support for efforts to improve public health in the U.S. and abroad.”

Joining Buffington as the new project manager will be Kathy Le. As coordinator of the program for the past two years, Le brings experience in health communication, health promotion and entertainment-education.

Le graduated from the Keck School of Medicine of USC in 2006 with a Master of Public Health. Prior to obtaining her master’s degree, she spent two years at Novartis (formerly the Chiron Corp.) conducting infectious disease and cancer research. Le also holds a Bachelor of Science in biological sciences from the University of California, Davis.

“Six out of 10 Americans who watch prime-time dramas say they learn something about a disease or how to prevent it from a TV series,” Kaplan said. “With these two new grants, we’re excited to be able to be a resource to the creative community not only on disease, but also on broader questions of health policy, from the community arena to the globe.”