Federal funding for USC’s research on Alzheimer’s disease and related dementias more than quintupled between 2015 and 2018, according to an analysis via the National Institutes of Health’s online reporting tool.

USC’s NIH funding for Alzheimer’s was $68.3 million in 2018, a striking increase from $13.3 million in 2015. The NIH is the largest public funder of biomedical research in the world.

“USC faculty choose to work on the world’s most important problems. Recognizing that more than 5 million Americans suffer from Alzheimer’s disease, a diverse group of our faculty have chosen to seek ways to mitigate the devastating effects of this complex disease,” said USC Provost Charles Zukoski. “The exceptional quality of the ideas and impact of results coming from the Alzheimer’s research labs at USC are reflected in growing NIH support.” 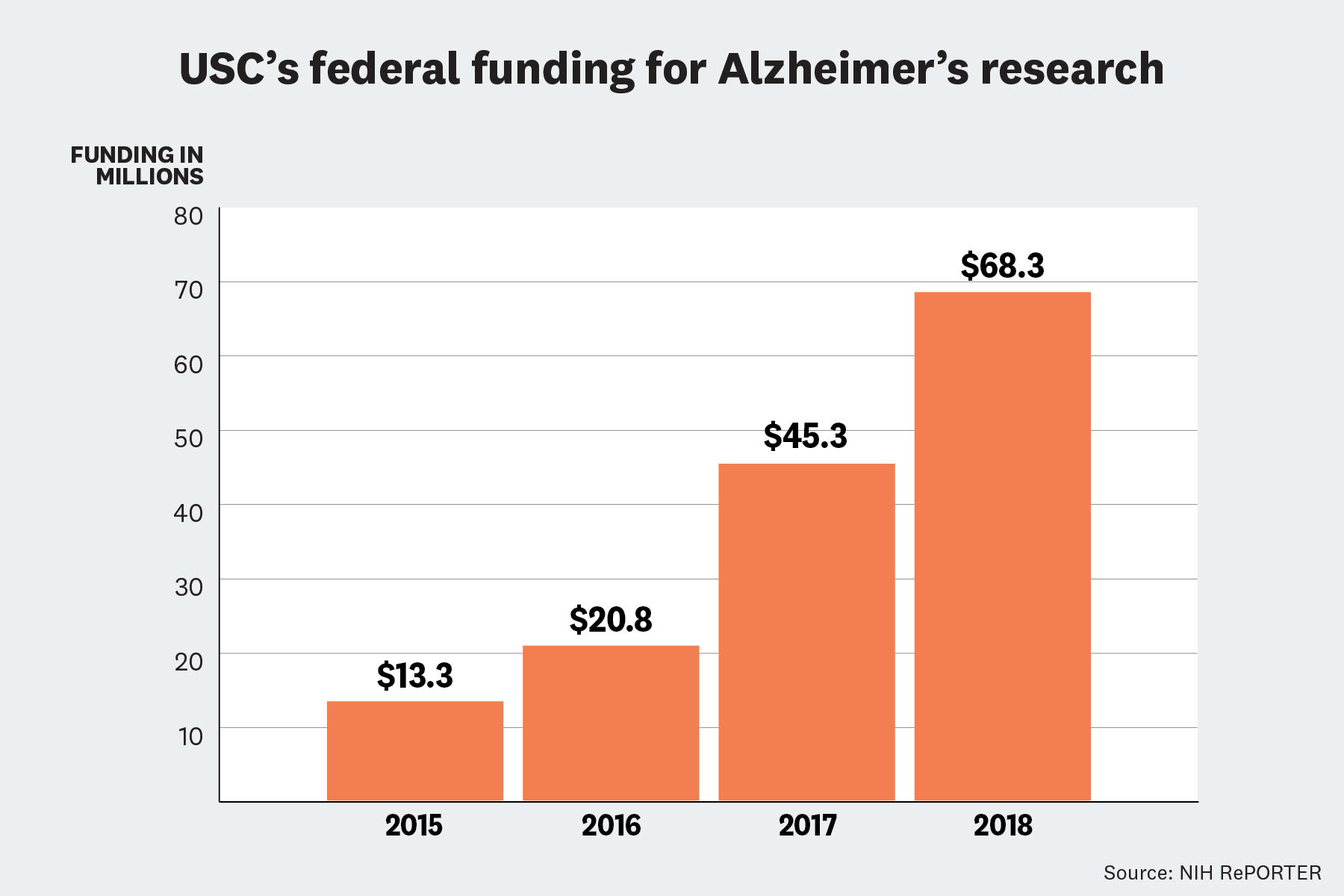 USC‘s federal funding for its research on Alzheimer‘s and related dementias increased by more than 400% between 2015 and 2018. That figure includes large grants for clinical trial infrastructure as well as a drug trial to prevent Alzheimer’s in people with “preclinical” disease. (USC Illustration/Diana Molleda)

Some of the largest awards support the acceleration of clinical trials themselves, as well as testing experimental drugs. For example, the NIH awarded $14 million to Paul Aisen, director of USC’s Alzheimer’s program in San Diego, to coordinate a network of 35 clinical sites that will feed patients into clinical trials. The Alzheimer’s Clinical Trials Consortium is jointly led by Aisen, Reisa Sperling of Brigham and Women’s Hospital in Boston and Ronald Petersen of the Mayo Clinic in Rochester, Minn.

The $14 million is the first installment of what will total $70 million over five years. Other grants cited are part of multiyear awards.

In addition, the NIH awarded Aisen $4.9 million and another $5 million to recruit potential study participants 10 to 20 years before symptoms appear with a free online memory test that participants take from home every three months. This “trial-ready cohort” of people can be invited to take part in a clinical trial, eliminating the lengthy recruitment process that is typical of drug studies.

Also included in 2018 was a $9 million grant to Aisen for a clinical trial of drugs to prevent Alzheimer’s disease in individuals who have evidence of amyloid plaque, a hallmark of Alzheimer’s, but no disease symptoms. They are tracking the rate of subtle cognitive decline in people receiving the anti-amyloid drug versus those receiving placebo.

In 2018, the NIH awarded USC researchers 84 separate grants, up from 32 in 2015. Faculty who received grants of $1 million or more for Alzheimer’s related research last year included:

November is Alzheimer’s Awareness Month, and USC scientists are researching healthy lifestyle choices and certain drugs that might reduce the risk of developing the disease.

Women in their 70s and 80s who were exposed to fine particle pollution had declines in memory and physical brain changes that were not seen in women who breathed cleaner air.