We could all learn something about creativity from Alfred Brown IV.

Off-the-wall ideas fuel his prose writing and old-school analog photography. He peppers his lyrics as the frontman for hardcore punk band Dangers with obscure cultural references. Philosophical lessons imbue every gritty, sweat-pouring workout at the gym he co-owns and runs in El Segundo.

Even as the seventh-year USC graduate student chips away at his PhD in creative writing and literature at the USC Dornsife College of Letters, Arts and Sciences, Brown travels the world to scream his lungs out from the stage at punk rock shows and capture austere photographs of glaciers and black sand beaches in Iceland.

“He’s a character. He’s wild,” said Thomas Gustafson, associate professor of English and American studies and ethnicity at USC. “He’s done more stuff in his lifetime than I’ve done at 65. He offers such a beautiful example. That’s who you learn from — the curiosity, the passion, living life deeply and fully.”

I don’t know where I’m going to be in a year. It’s precarious. It has a lot of stress involved.

For the 36-year-old who grew up on the sun-drenched streets of L.A. County’s South Bay, pursuing an interesting and creative life feels less like a choice and more like a necessity. He decided not long ago to sacrifice comfort and stability in his lifelong pursuit of artistic expression.

“I don’t know where I’m going to be in a year,” Brown said. “It’s precarious. It has a lot of stress involved. But I’d much rather it be this way than to know, for the next 20 years, I’m going to go to this exact office and do this exact task. I can’t exist that way.”

How does he sustain his passion in the face of anxiety and pressure, financial and otherwise? What drives his dedication to art, literature and music when easier paths beckon? And what advice does he have for fellow students at USC and others seeking to live a life of exploration and imagination?

Here are five principles that Brown finds essential to the quest for creative fulfillment. 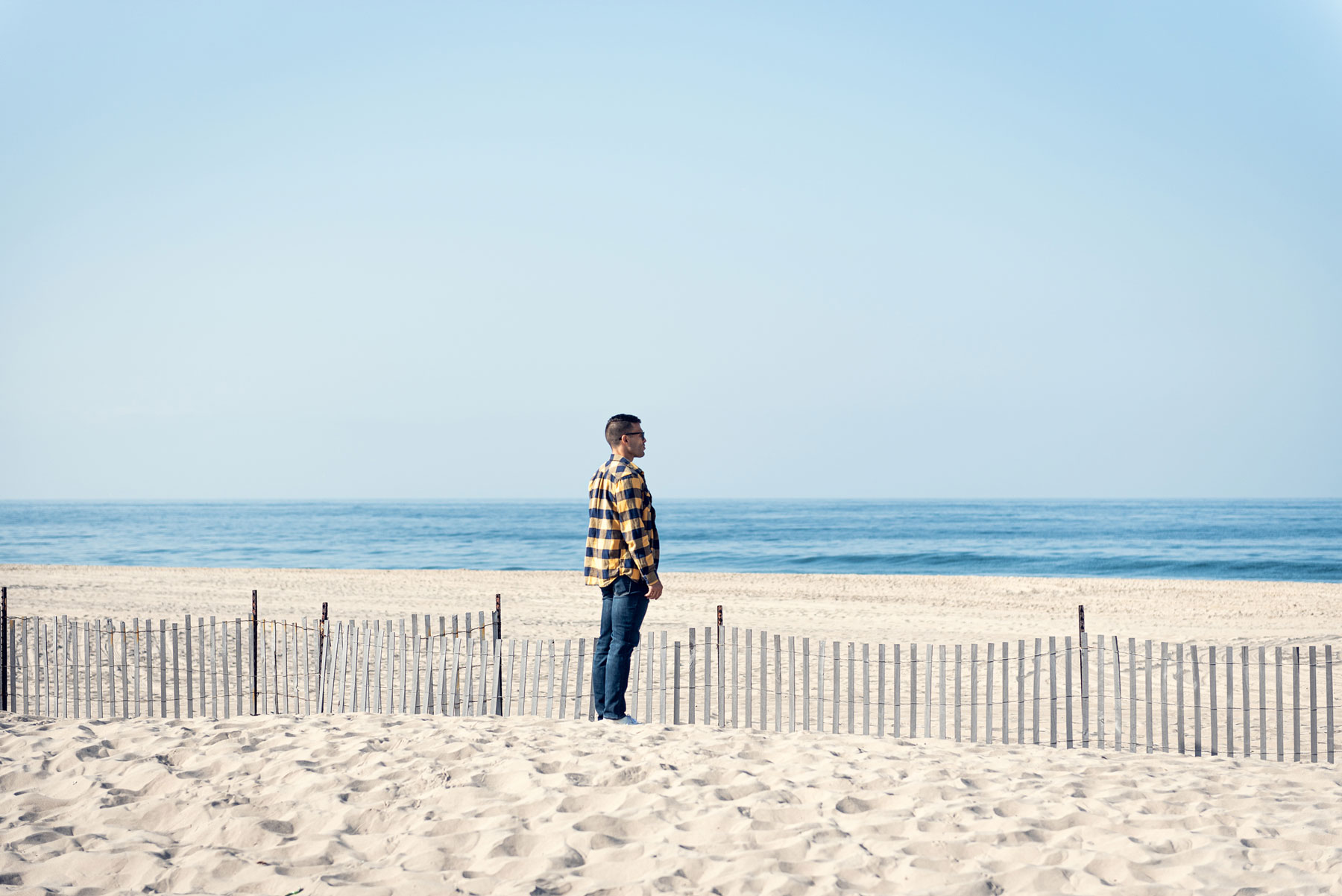 “If I’m going to continue to breathe — and that’s really what it comes down to, finding reasons to be alive — then I have no interest in knowing exactly what tomorrow will be like.”

Students who took the introductory course on creative writing that Brown taught at USC Dornsife questioned him almost immediately, worried about their assignments. How long should their papers should be? What kinds of quotes should they include? How many sources?

His response: Embrace being lost and not having all the answers.

He borrows that philosophy from Donald Barthelme, a fiction writer who espoused the value of using the unknown to drive the creative process.

“Whenever you are creating, you need to know enough to start but to actively not know enough to finish,” Brown said. “That inherently is a position that people would find discomforting, because a lot of people enjoy stability. I find stability to be suffocating.”

USC psychology major Alexandra Haydinger said Brown pushes his students to their limits but also brings an energy to the classroom that they feel impelled to match.

“We’d turn something in, and he’d say, ‘Great start. Now do more.’ It was always anti-stagnancy. Everyone was willing to be super open and go for it.”

Uncertainty rarely feels good, Brown acknowledges, except for those fleeting feelings of accomplishment after he completes a task. But confusion keeps him pressing forward.

“That’s a tangible reason to live until Saturday,” he said. “Maybe it’s dire and sounds dark, but I need those things the way other people need to know how their mortgage is getting paid.” 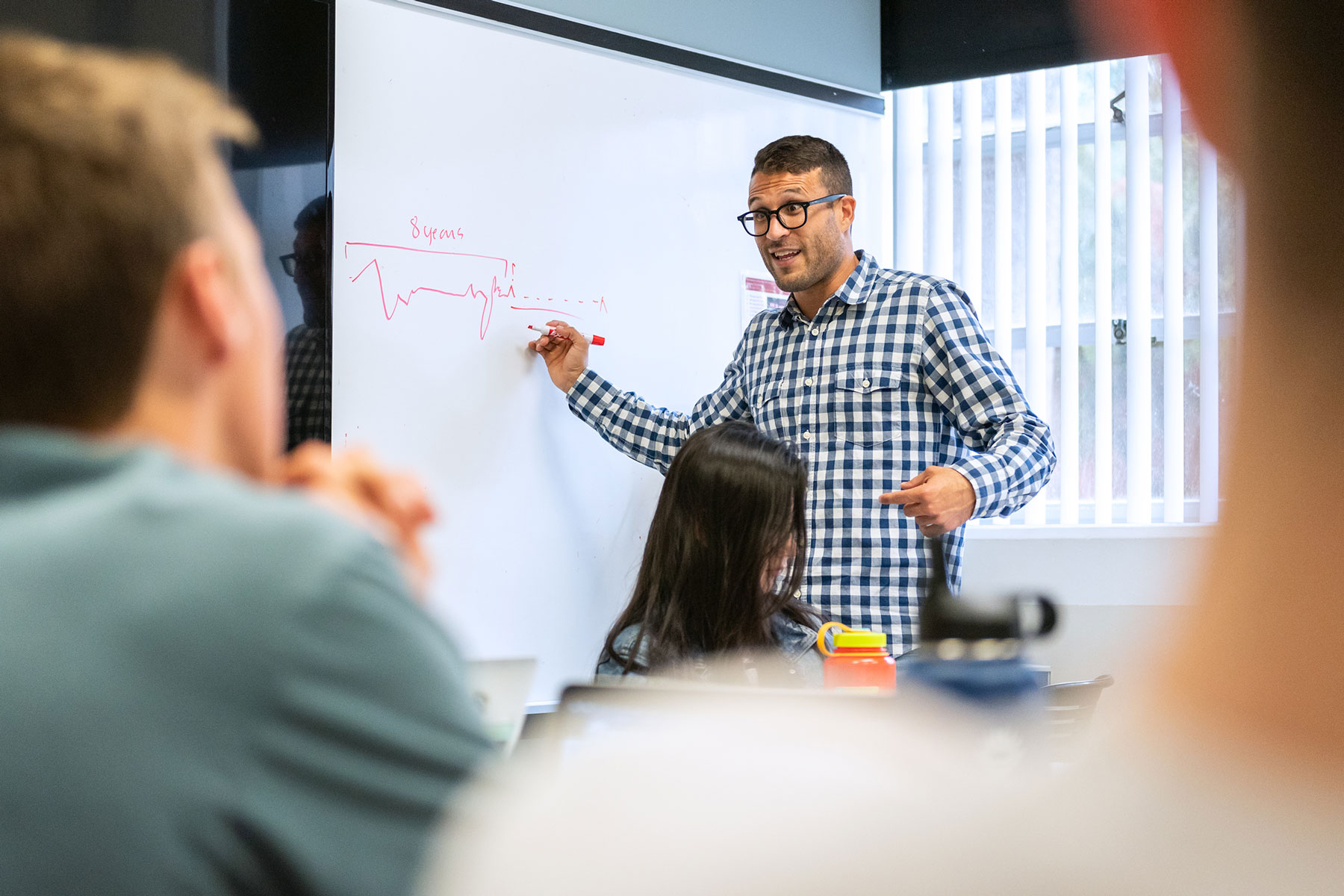 “You know even before you set out to do something, you aren’t going to achieve what’s pictured in your mind. That’s why the motto for all the academic and athletic things I do, and also my art, is to fail better.”

On the wall of Brown’s bedroom in an apartment near the beach in El Segundo hangs a framed image of a Dangers song title: “I’ll Clap When I’m Impressed.” A few months after he had pressed the print against double-sided tape, it came unstuck and fell to the bottom of the frame.

Visitors inevitably notice the flaw and insist that he fix it. But Brown resists the urge. Even as he struggles to perfect his art, he knows it’s a fight he’ll never win.

“It’s impossible to succeed, to a certain extent,” he said. “You’ve got an idea in your head that’s nebulous, has different levels of clarity. When you’re making the product, whether it be music, writing, photography, there’s no possible way for it to be a one-to-one copy of what was in your brain. There’s always some loss.”

Brown’s goal as a creator is to shift the ratio ever closer to an exact duplicate, to recreating the vision in his mind. He measures his growth — as a writer, photographer, musician and athlete — by the incremental progress he makes toward closing that gap. 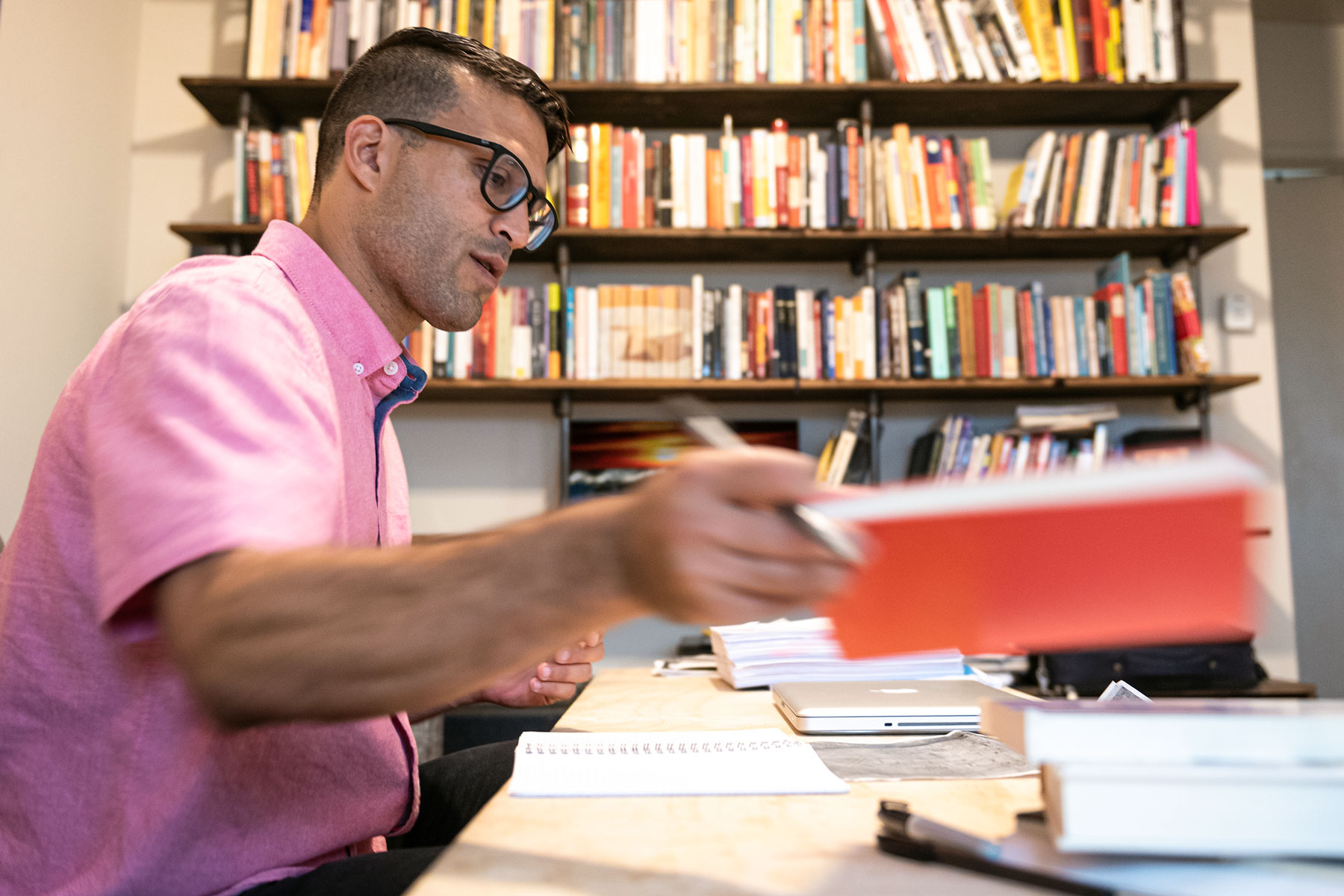 The spark that set off Brown’s creativity came as a gift from his grandmother at age 6 — a journal.

He had toddled with her to the now-shuttered Arico’s Hallmark Shop in Redondo Beach, Calif., to pick out his first diary. Leafing through it, he can find the page where he dreams about becoming a professional basketball player.

“But you need to have a backup plan, so I talk about wanting to play music and wanting to write,” he said. “I think I spelled it wrong, too — R-I-G-H-T.”

His grandmother encouraged him to write every day after school. Although he played music and sports, Brown began focusing more of his attention on becoming a writer. Then he started worrying whether he was wasting time by pursuing other creative ventures.

“I felt very guilty, because I thought the only thing I should be doing is writing,” he said. “Write, write, write. That’s what you do as a writer.”

When he asked a close advisor at USC, Professor Percival Everett, how to deal with that anxiety, Everett invited Brown to his home. In the basement, he revealed a studio with paintings and told Brown he considers himself a painter who also writes.

It freed Brown to seek inspiration in whatever catches his imagination. Now he revels in jumping among various forms of writing, from journal entries to lyrics to long prose pieces. When he needs a fresh perspective, he switches to his camera or guitar.

He brings that same mentality into his USC classroom, encouraging his students to view literature in new ways. He’ll often pair a poem with a music track or painting. He leads field trips to a water treatment plant and other overlooked areas of L.A. to expose his students to different landscapes.

“Anything to shake up their notion of writing, form, meaning, possibility,” said Aimee Bender, professor of creative writing at USC. “He’s a very inventive teacher while also being very rigorous. He always wants to make something fresh enough that students see it in a new way.” 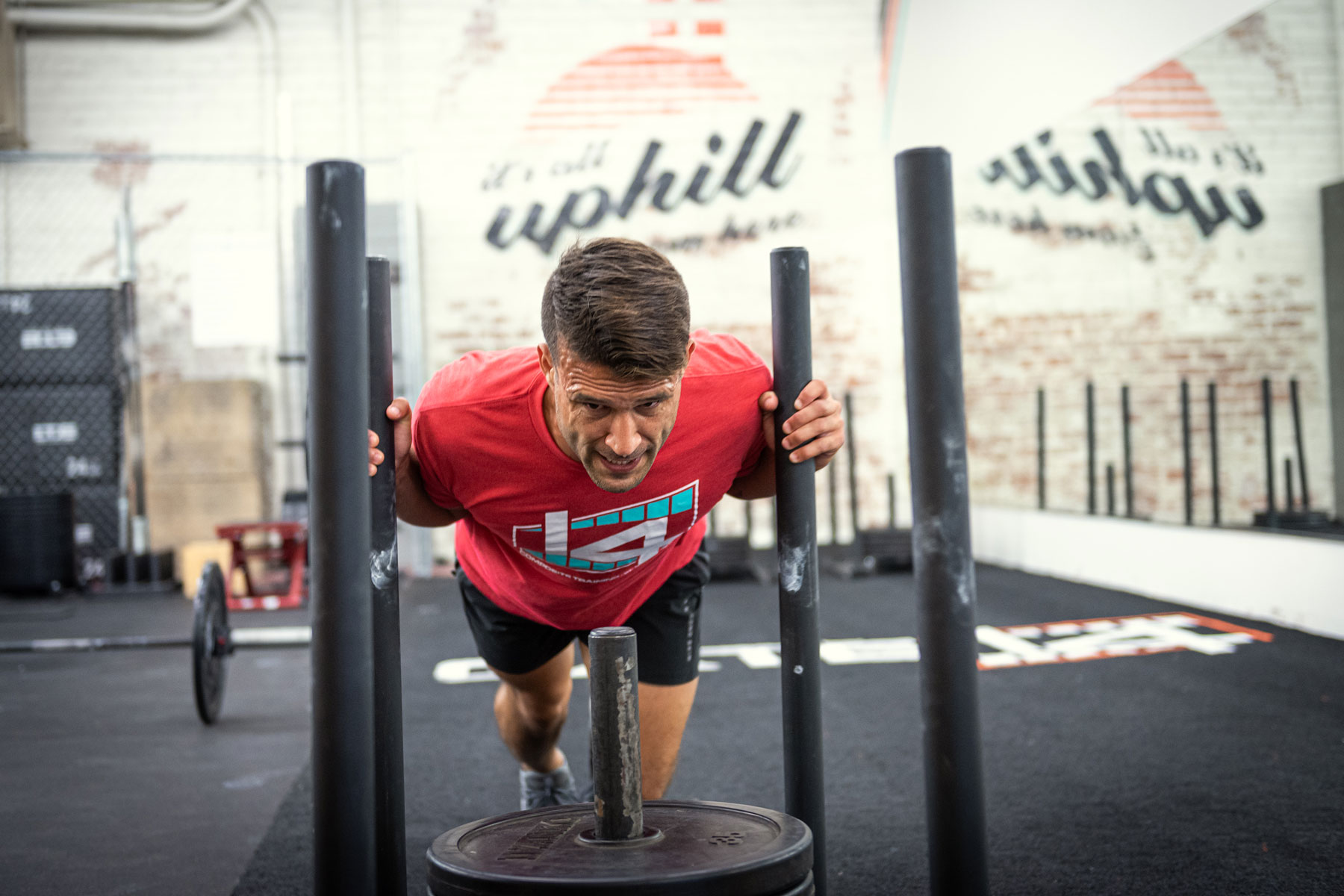 “When you live a life of the mind, it can become a hall of mirrors. The physical nature of things, for me, brings life back to the immediate.”

There’s something about writing and physical movement.

Writer Haruki Murakami proclaimed that most of what he knows about writing he learned through running every day. Ernest Hemingway reportedly once told an interviewer, “My writing is nothing. My boxing is everything.” For Brown, the gym is his escape.

“With writing, the consequences are months or years away,” he said. “The consequences of whether I can pick up 165 pounds right after I sprinted up a hill are immediate. I can’t think of more than what’s in front of me.” 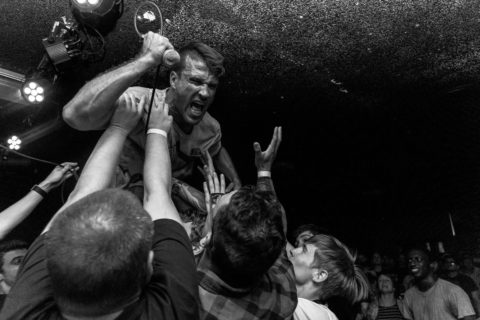 The same phenomenon occurs with his music, especially during live performances with Dangers. The band can’t stop midway through a song to change a lyric or replay a verse without disrupting the show. And howling into the microphone gives Brown a sense of release and catharsis.

Gustafson, the USC professor who has witnessed Brown’s passion as a teaching assistant, also attests to his intensity on stage: “You can see Al just going there with his group, just letting it wail. It’s like Janis Joplin — take another piece of my heart! He’s out there, opening up and letting it flow. It’s beautiful.”

Brown’s creativity also bleeds into his physical pursuits. Most of the workouts he develops are based on philosophical ideas. Some allude to literary figures.

One exercise involves clutching a sandbag weighing 50 pounds or more, hopping on a treadmill set at a 14% grade and sprinting as long as you can. He calls it the Sisyphus Run, a nod to the Greek myth.

“There should be a point in your workout where you don’t know if you can do it,” Brown said. “If you don’t get to that place, we have failed you.” 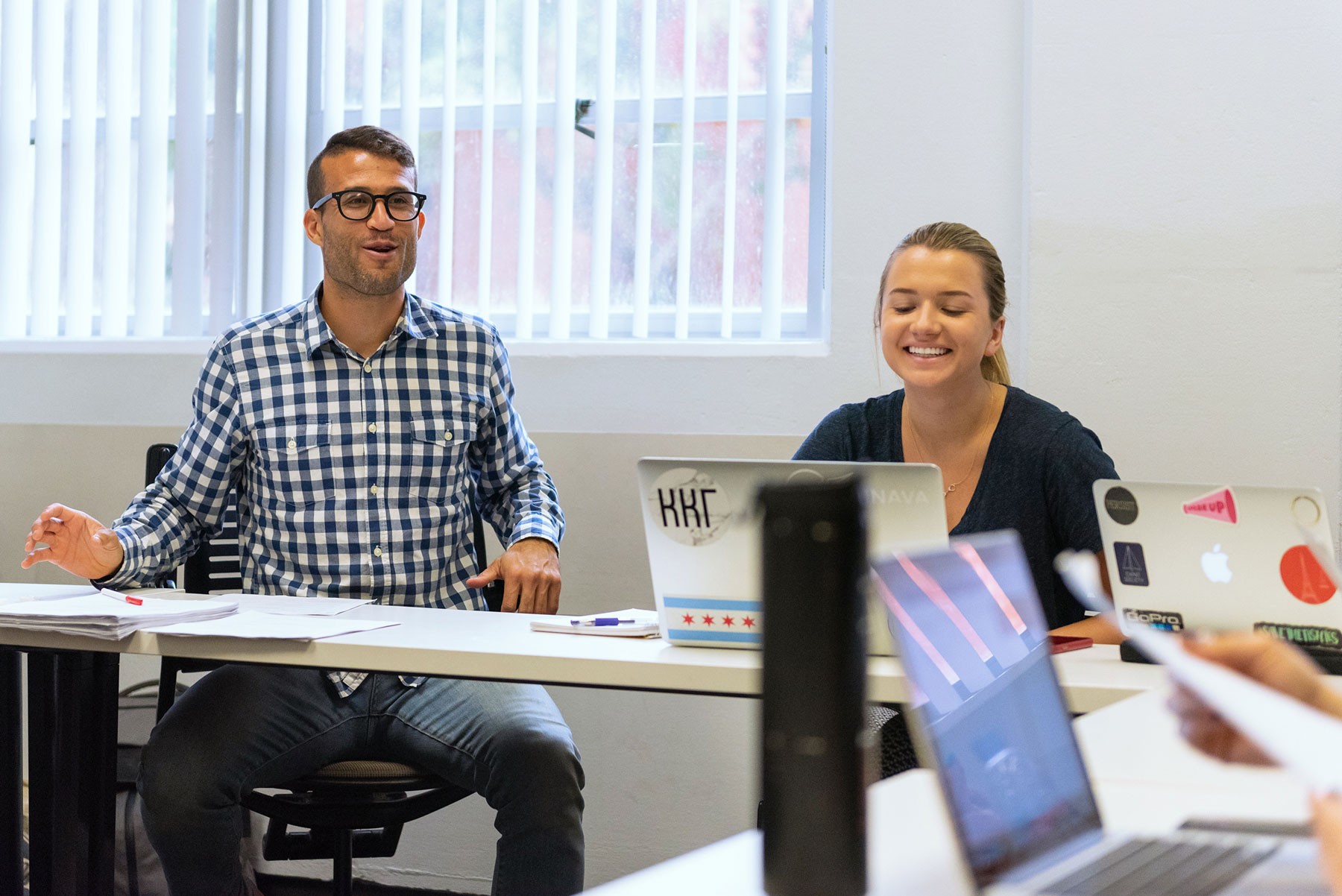 It’s a tired trope: the starving artist with unpaid parking tickets and a diet of cheap staples like ramen or beans and rice. Brown doesn’t subscribe to that often-romanticized myth. He pays the bills and lives comfortably enough in a shared apartment.

But he acknowledges that the career path he envisions — as a “maker of things” — doesn’t guarantee a lucrative paycheck every month. And he’s come to terms with that possibility.

“Money is never an excuse,” he said. “It’s just not. A lot of people will come to me and say, ‘I want to do my MFA, but it costs a lot of money, and ehhh.’ If you can’t figure out how to make that work, you don’t care about the art that much.”

In his eyes, being a true practitioner of a creative craft requires commitment and dedication. Another of his maxims: Consume endlessly and practice vigilantly.

You need to know everything that’s been done. You need to exhaust all the possibilities. You’re learning the alphabet of whatever your art is.

Aspiring chefs should eat at every restaurant they can, Brown said. Musicians should dig deep into the record bin and explore new genres. He tells his students that the fastest path to becoming a better writer is to read voraciously.

“You need to know everything that’s been done,” he said. “You need to exhaust all the possibilities. You’re learning the alphabet of whatever your art is.”

The other requirement, steady and consistent practice, is equally important.

“You need to find time every day,” Brown said. “You have to sit at your desk. You don’t have to write, but you have to put yourself in the chair.”

Alfred Brown IV earned his undergraduate degree from Princeton University in English and his master’s in creative writing from Columbia University, where he was the fiction editor of Columbia Journal. Follow his work on his website and Instagram.

All photos by Eric Lindberg unless otherwise noted.

Escaping the pressures of daily life, students trekked to the San Gabriel Mountains to engage in contemplative prayer and learn about the mystical rituals of early Christianity.

Experts estimate that a language goes extinct every two weeks. USC student Prim Phoolsombat wants to use a blend of linguistics and computer science to help save them.

Five lessons on living an interesting life, from the wildly creative mind of Alfred Brown IV