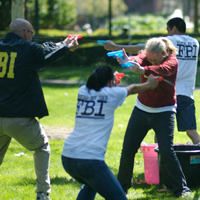 A water fight in Alumni Park was part of a marketing strategy to recruit diverse agents into the FBI.

Unlike most water gun fights, the one that broke out in Alumni Park on April 10 was serious business.

Part of a strategy to recruit more diverse agents into the FBI, the super-soaking melee was the brainchild of the undergraduate business class Marketing 406 � Practicum in Advertising, Promotion and Design, one of only six classes chosen from across the nation to devise campaigns.

“The FBI handpicks the schools in terms of prior success for them,” said Therese Wilbur, who has taught the class since she became a professor at the university in 2006. “The decision goes all the way up to headquarters in Washington, D.C. And USC should be honored because of that.”

With 13 years of experience in brand management at Mattel and a USC Marshall School of Business MBA under her belt, Wilbur runs her class like a professional advertising agency.

Marketing 406 even has a budget of $2,500, courtesy of the FBI Collegiate Marketing and Recruitment Program and EdVenture Partners, a nonprofit that facilitates corporate-university partnerships for hands-on learning.

“We’re split into different departments and have specific tasks that you might actually do in an agency, which is really great,” said Caitlin Gaffney, a student in the class’ publicity group. “It’s also a real-world client and a real budget. So it’s a lot more fun, and it’s a lot more difficult at the same time.”

One of the biggest challenges of this year’s campaign is to change the image of FBI agents as white male workaholics.

“One of the techniques we used in the focus group is called the projective technique,” Wilbur sad. “So we said, ‘Draw a typical FBI agent and describe that person.’ So the description was ‘has no friends, wears a suit and has a white shirt!’ So in order to break down the stereotype, we came up with the event theme of ‘Work and Play With the FBI,’ because it does provide you a balanced life.”

After conducting initial research, the Marketing 406 class concluded that the most effective slogan was a play on the FBI’s famous list of criminals-at-large. The class papered the campus in “Wanted by the FBI” posters detailing specific needs of the agency � foreign language, computer and engineering skills � and listing the rewards that a government career can offer in return.

In keeping with the campaign’s spirit of fun, the Marketing 406 class also employed a word-of-mouth technique by dressing up as agents, “arresting” students who were passing by and giving them water guns and T-shirts.

“The student arrests were actually a big deal because we’re portraying FBI agents,” Wilbur said. “There was a script written up, and that actually went through the FBI for approval.”

On April 15, the class staged a more formal information session and meet-and-greet where students can schedule sit-down appointments with FBI agents. At the semester’s end, Marketing 406 will track how many USC students visit FBIjobs.gov and project the number of new applicants.

The students will present their results to the FBI, and each will walk away from the class with a copy of the final campaign plan book and “FBI Marketing Internship” on his or her resume.

So far, the FBI plans to use USC’s campaign locally and possibly nationally, but the class is more than just an impressive resume builder.

“Especially now that I’ve been teaching for a few years, I have students who have worked on the FBI campaign (in the past) who want to come back and talk to my class and tell them what an incredible experience it was and how much they enjoyed it and how it was really a pinnacle in terms of learning and how they use that learning in their careers today, so that part’s really fun,” Wilbur said. “It makes it really rewarding for me.”

A Marketing Class That Means Business