It is Saturday morning and a little boy in an orange shirt and blue shorts squeals with laughter. He has just spotted a group of familiar friends headed his way.

The 3-year-old drops the plastic toy he is playing with and sprints toward a group of people wearing colorful clothes, oversized shoes and big red noses.

“We’re three clowns running into the room, singing and dancing,” said recent USC graduate Casey Dunn. He is part of a group of theatrical performers from the USC School of Dramatic Arts’ medical clowning program that uses drama therapy to help bring healing and well-being to patients. “All of a sudden, that’s their world for as long as we’re in the room.” 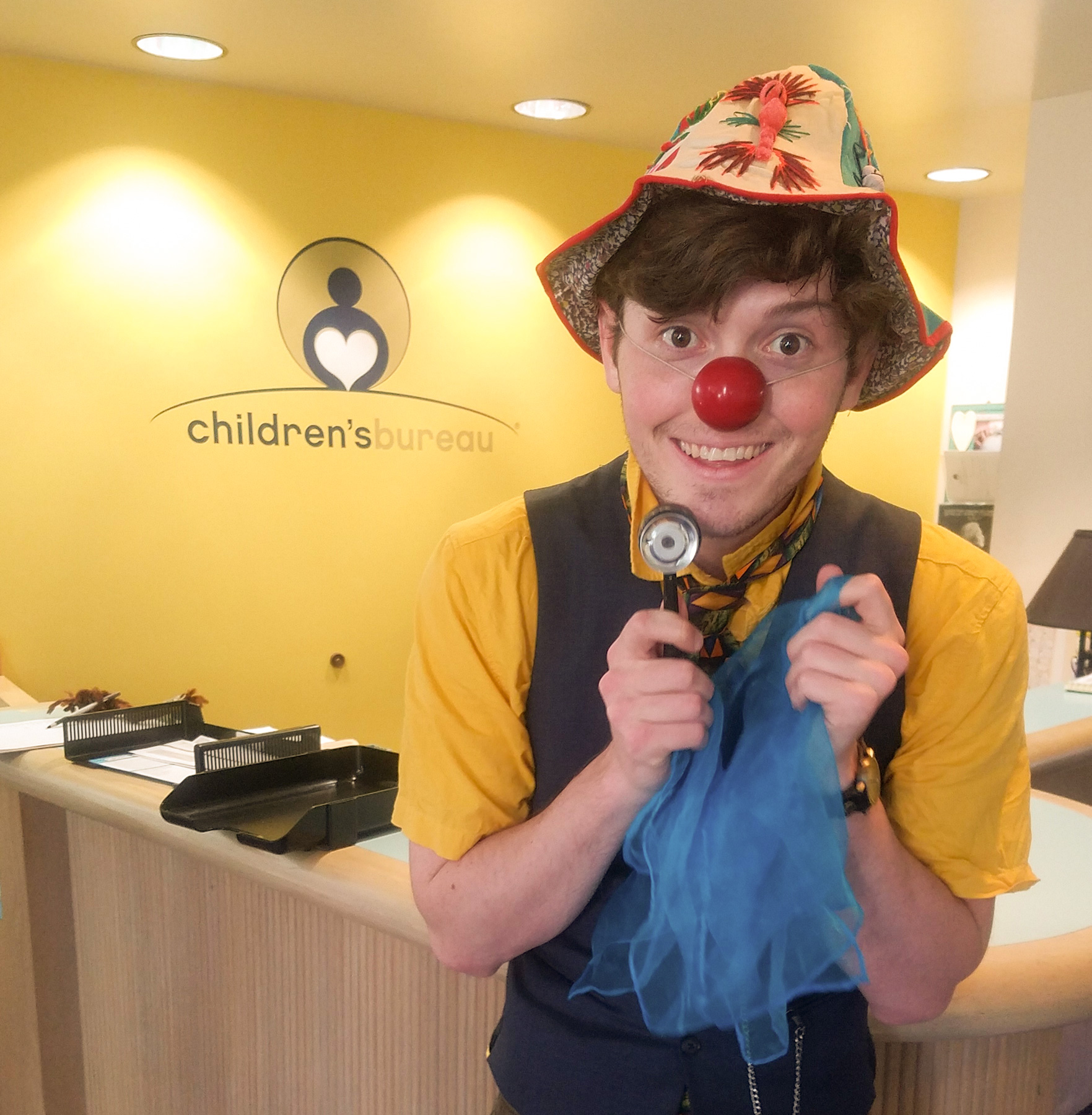 That room is usually inside a hospital for seriously ill children, but today the clowning program is somewhere it has never been before: the Children’s Bureau. The children’s advocacy group is the largest investor in child abuse prevention in the country, contracted with the Los Angeles County Department of Children and Family Services to provide adoption promotion and support services for adoptive families and children in foster care.

“This collaboration with USC is incredible,” said Sean Sparks, program coordinator at the bureau. “It’s something I would have never thought of, but it makes perfect sense. It’s like this blessing from the universe.”

With a grant from USC Arts in Action, an initiative created by the Office of the Provost that supports positive social change through the arts, the clowning program has partnered with the Children’s Bureau to bring medical clowning into their mental health programming and provide a space for affected children to receive emotional and transitional support.

Together, USC and the Children’s Bureau have launched a pilot program that will combine medical clowning and foster care with the goal of increasing the bond between the foster parent and child. The program will begin by introducing the medical clowns to a group of foster parents and a group of foster children. Eventually, the clowns will interact with both the parents and children in the same room to help the two groups bond. 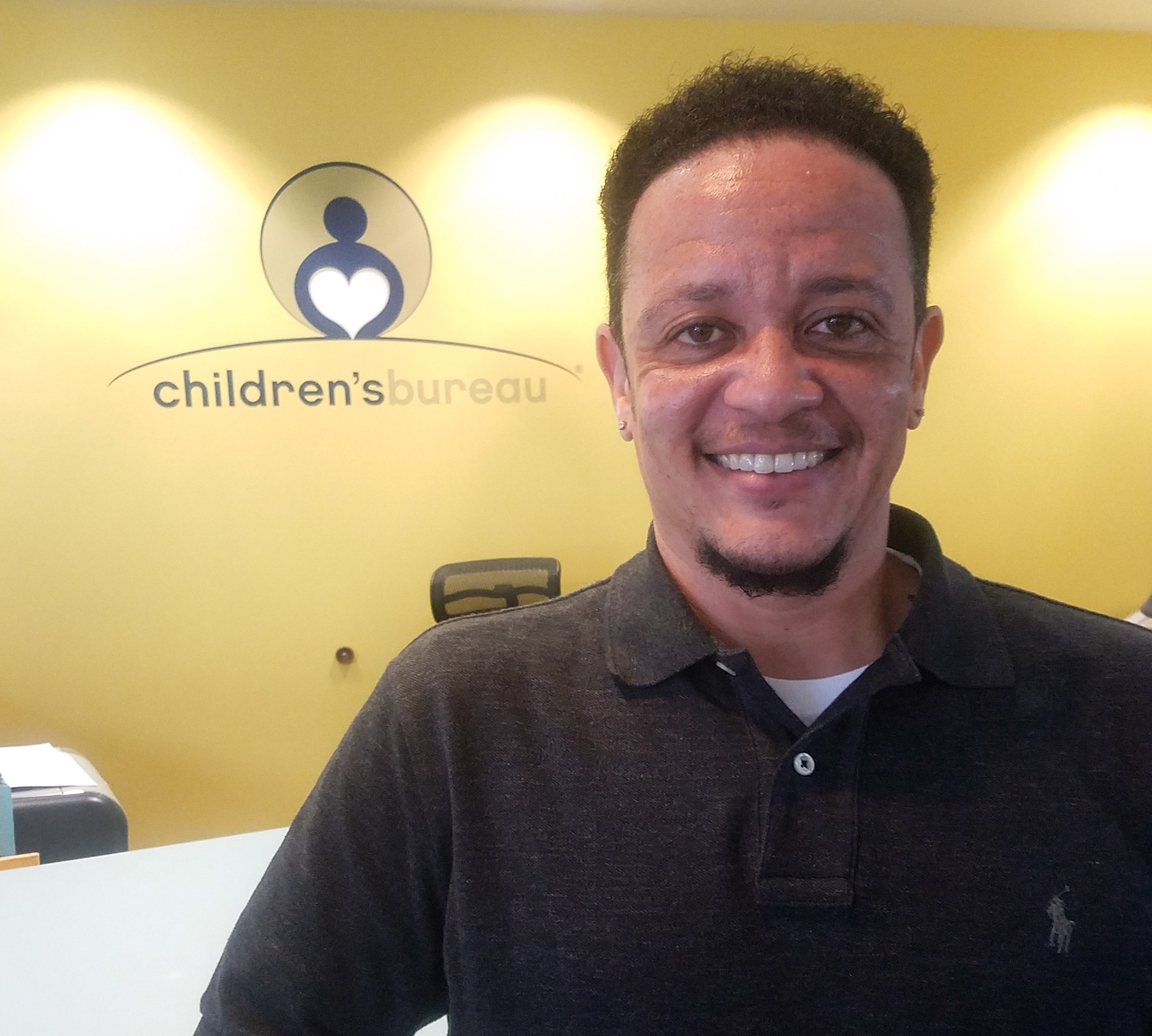 The medical clowns provide a fun way for the children to build relationships that can lead to healing, says Sean Sparks, program coordinator at the Children‘s Bureau. (USC Photo/Chandrea Miller)

“They don’t have the benefits of a parent-child biological relationship. They kind of need to get comfortable with the idea of bonding,” said Zachary Steel, assistant professor of theater practice at the School of Dramatic Arts and director of the clowning program. “The objective is to use medical clowning as a conduit to get the parents and the youth to embrace play as a bonding tool.”

“Anytime there is a disruption in a relationship with a primary caregiver such as an early breach in attachment, research shows there’s a change in the brain. Neuropathways in the brain shift, which creates a world that is unsafe. Not only is the world unsafe, but relationships are unsafe,” Sparks said. “The thinking for a foster child is: If my birth family didn’t keep me, then why would anyone else stick around?”

With roughly 30,000 children in foster care in Los Angeles County and 1,400 awaiting adoptive homes in L.A., parent-child bonding is essential to increasing permanency and stabilization for children within the foster care system.

In addition, many of the children in care of the L.A. County Children and Family Services who frequent the Children’s Bureau are Latino. According to the bureau, understanding cultural heritage is vital to addressing specific foster care needs. 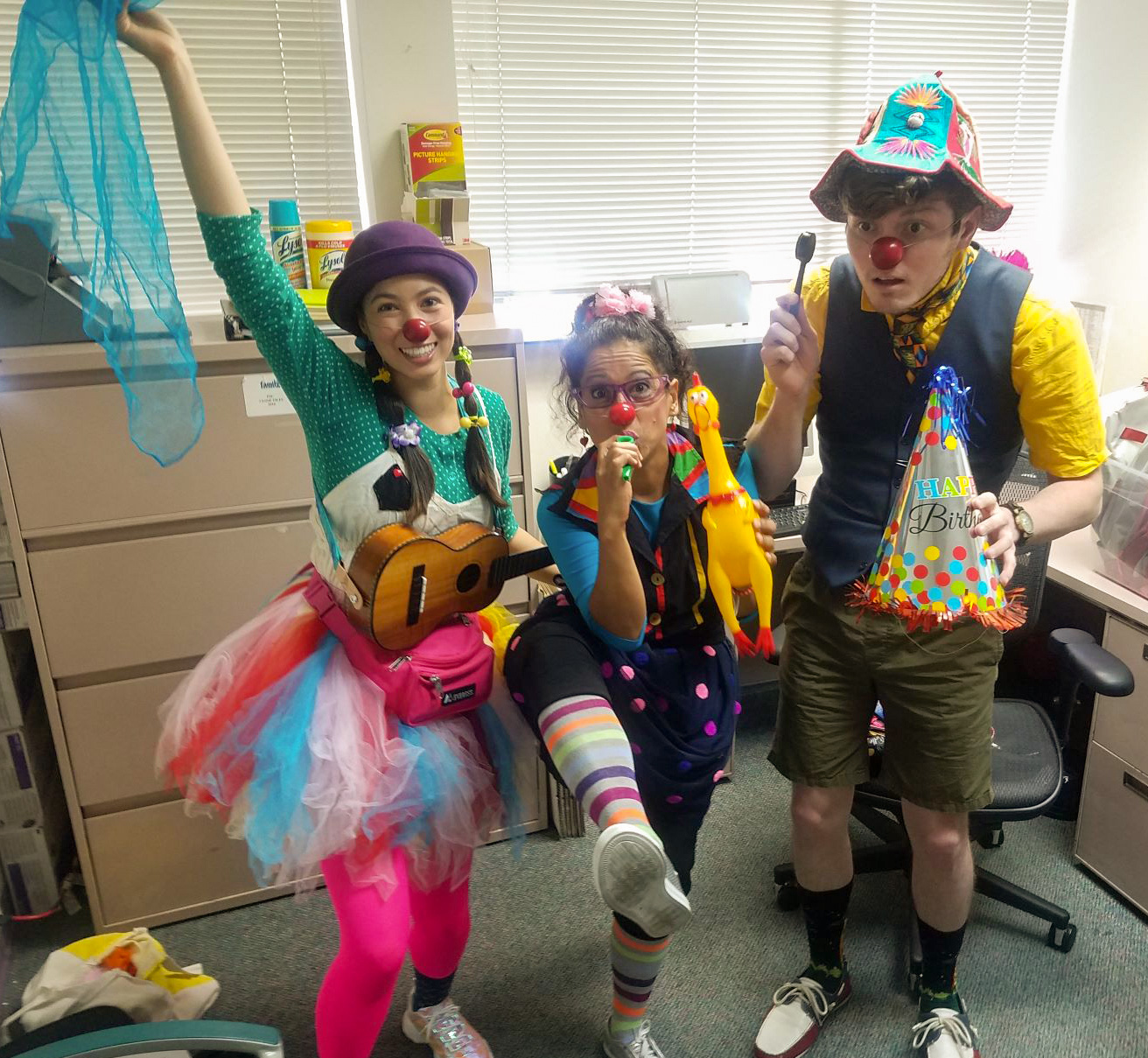 Raquel Gendry, center, is from Ecuador and has been a medical clown for 13 years. (USC Photo/Chandrea Miller)

“My focus is on helping people in the American Latino community to find and connect with their inner clown,” said medical clown Raquel Gendry, the Spanish-speaking ambassador of the troupe. “The Latino community prides itself on hard work, and sometimes the foster parents think of play as frivolous or a waste of time. I am here to remind the foster parents that it’s okay to play — not only okay but essential to bonding with their foster children.”

“Play is this really safe, fun way to build relationship and connection,” Sparks said. “We believe connection leads to healing.”

Indeed, there has been a reported reduction in fear and anxiety for foster parents and children during the counseling sessions, a positive psychological phenomenon that continues long after the clowns have left the building.

“The clowns can change the energy of the room from one that is clinical and stiff to one that is more open and vulnerable,” Steel said. “The hope is that when the clown session is over, the adults and children will continue to be more open and willing to share with the counselors.”

How medical clowning can make a real impact

Katie Snyder, who graduated from the School of Dramatic Arts in 2018, said that she was thrilled when she discovered the medical clowning class because she grew up loving the arts and community service.

“It puts all my passions together,” she said. “I’m very grateful that I found this particular art form.” 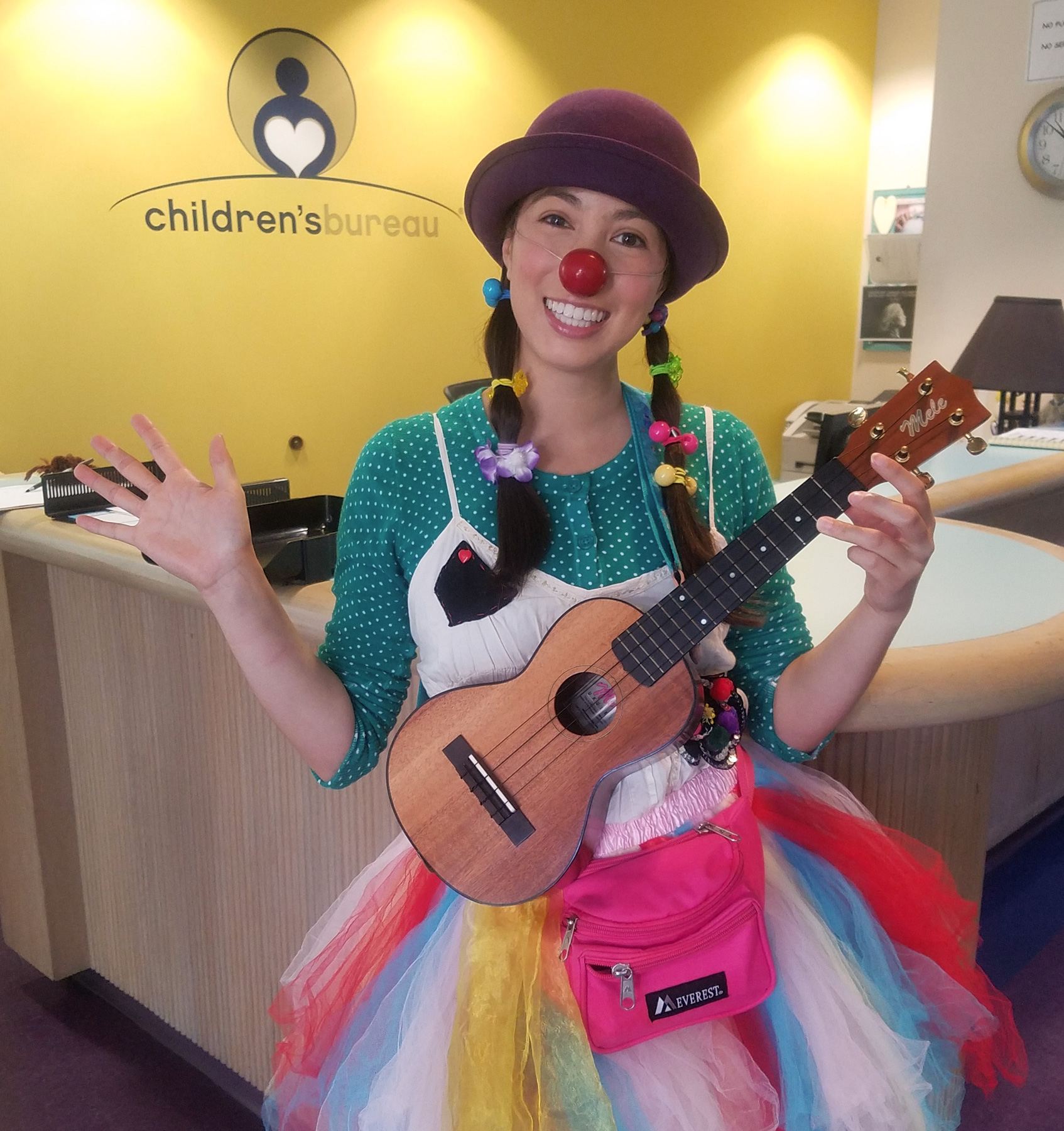 USC graduate Kate Snyder was part of the first medical clowning class when she was a student. (USC Photo/Chandrea Miller)

Snyder said she is proud to have been a part of the first medical clowning class and encourages other students to take the course, which can lead to fulfillment inside and outside of the classroom.

“If our playful and joyful presence brightens their day even for a couple of minutes, that brings me such fulfillment,” she said. “I think the clowns send a message: No matter what, you can find time to smile.”

And according to the bureau’s program coordinator, that smile could mean the beginning of a truly transformative connection that could change the foster care system as we know it.

It will take a year before the pilot program data is collected and the research is complete, but for the medical clowns, each smile and laugh is proof positive the drama therapy is working. Medical clown Dunn recalled a specific little boy who greeted them earlier in the day.

“The first time we were here at the Children’s Bureau, he was really scared. He was very hesitant and would stand far away from us,” he said. “Versus today, he was sprinting in the room to greet us. There’s such a massive big difference in his openness to the clowns, which will translate into the rest of his life. He will have an openness to new experiences, conquering fears and realizing something really magical: a connection with other people.”

And the hope of a forever family.

Take it from medical clowns: Humor can heal

Hospitals have found a way to allay a patient’s stress, and the healing is all about laughs.

USC School of Dramatic Arts explores the power of partnerships

Dean David Bridel makes new connections on and off campus a top priority.

Gift from USC alumna and former foster child will endow a new program at USC Telehealth.

Jacquelyn McCroskey co-directs the Children’s Data Network, which teams with public agencies and others to help youngsters.