One year out from the 2020 general election, a substantial minority of Americans (45%) support the Senate removing the president from office if the House votes to impeach him, compared to 28% who think he should be acquitted, according to the latest USC Dornsife/Los Angeles Times poll.

Overall, Americans are also skeptical that Trump will actually be impeached and removed from office, rating the chance of it happening at 30 out of 100. Furthermore, Americans rated Trump’s chances of prevailing in the 2020 presidential election to win a second term at 53 out of 100.

These beliefs are counter to the poll’s finding that eligible voters who said they expect to cast a ballot in the 2020 election would vote for the eventual Democratic nominee over Trump by 54% to 33%. More than half of Americans said they would be completely or mostly unhappy if Trump were re-elected.

Among voters planning to cast ballots in a Democratic primary or caucus, former Vice President Joe Biden retains his lead in the slowly thinning Democratic field, with support for his candidacy largely rooted in the belief that he can beat Trump, said Robert Shrum, director of the Center for the Political Future at the USC Dornsife College of Letters, Arts and Sciences. The center oversees the poll.

Sen. Elizabeth Warren has gained ground among white voters and among those who say they share her values. 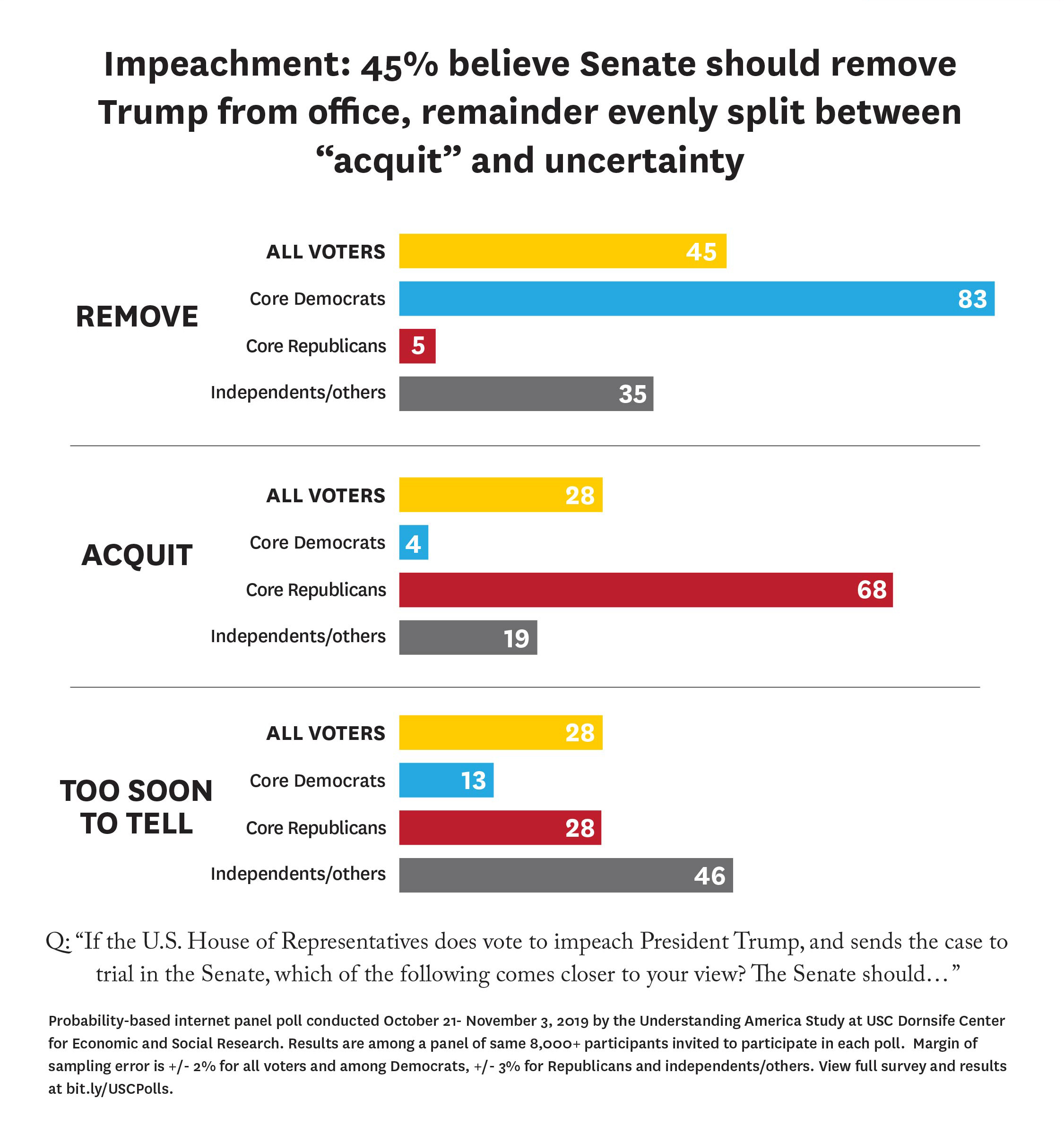 Support for impeaching President Trump and removing him from office divides sharply along partisan lines, with more than four out of five Democrats for impeachment and more than two out of three Republicans against it. Independents and members of other parties support removal over acquittal by nearly two to one, but more than half of that group said it is too soon to tell.

“Polls that do not provide an undecided option, except perhaps a volunteered response, are reporting somewhat higher numbers for removal,” said Jill Darling, survey director for the poll, which is conducted by the USC Dornsife Center for Economic and Social Research in their probability-based Understanding America Study. “We think the level to which Americans have and have not made up their minds is an important part of the story.”

Majorities of the two out of five eligible voters who are not yet closely following the news about the Trump impeachment inquiry, along with independents and those affiliated with third parties, responded that it is “too soon to say” that Congress should impeach and/or remove the president from office.

“As the House undertakes public hearings on impeachment there’s a substantial minority of Americans who are uncertain and possibly persuadable, should they begin to follow along,” Darling added. 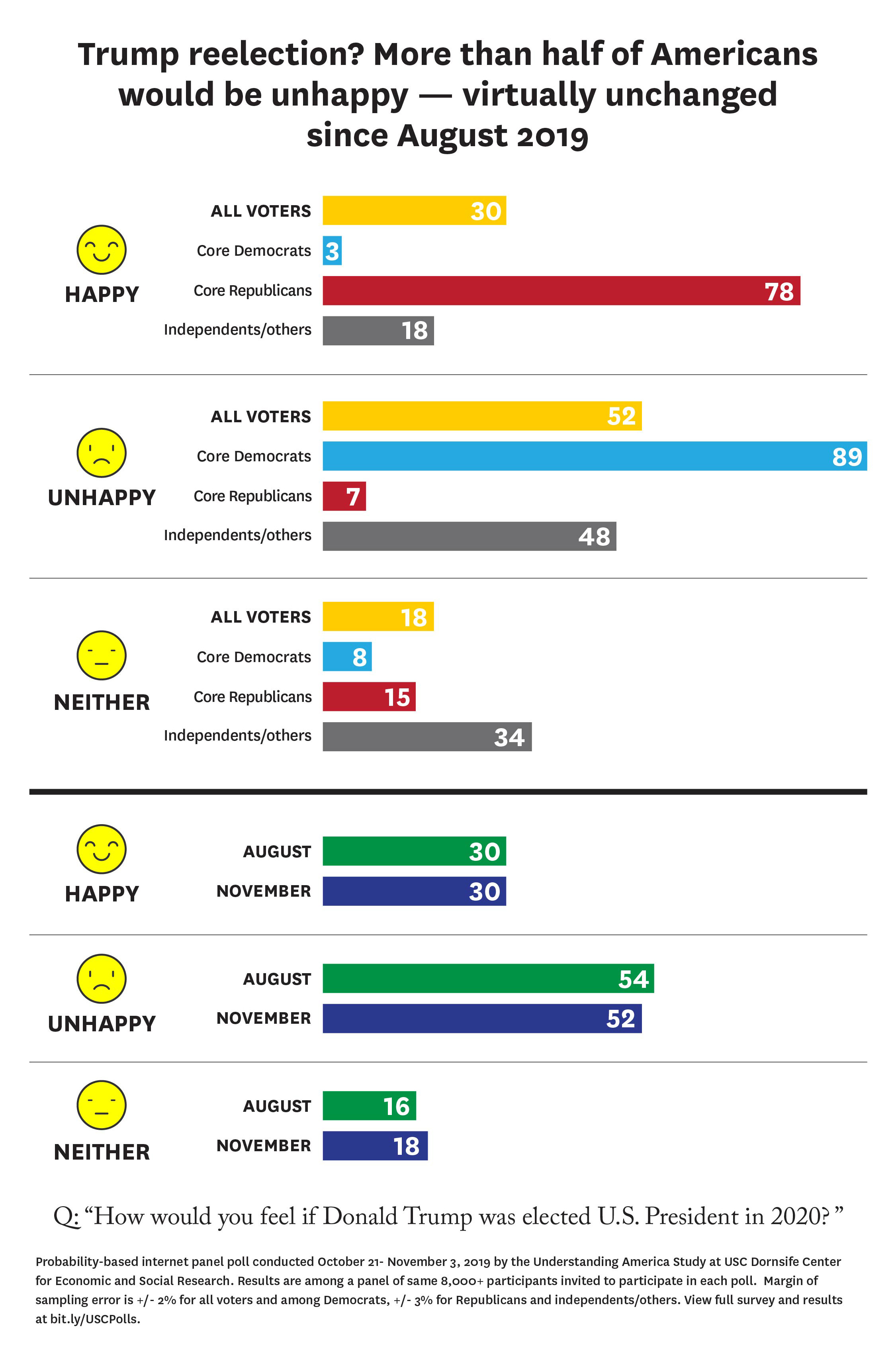 A majority of U.S. residents — 52% — say they would be mostly or completely unhappy if Trump were reelected, compared to 30% who would be completely or mostly happy.

“If you were the Trump campaign and you had these numbers, you would not be happy,” said Shrum. “A lot of people who think he will be reelected don’t want him to be. I think this is a steep hill to climb for Trump and may actually tell us more than a superficial horse race.”

Shrum said a lot depends on who the Democrats nominate. “I think it’s possible to argue that Trump can’t win but the Democrats can lose,” he said. 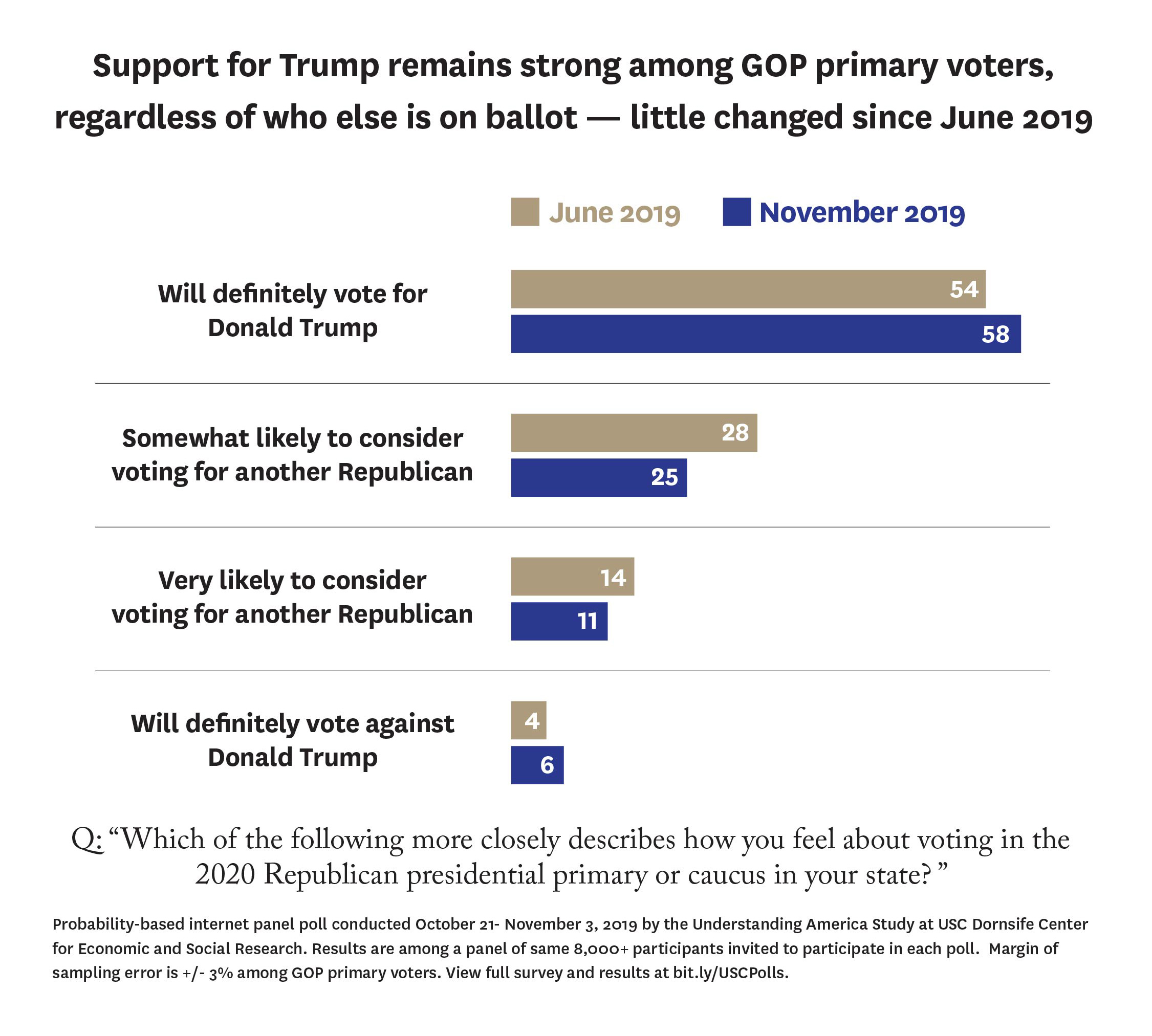 Nearly three out of five GOP primary voters say they will definitely vote for Donald Trump in their states’ primary or caucus, regardless of who else may be on the ballot. Those numbers have held steady and even slightly increased since the poll asked this question in June 2019, indicating that the impeachment hearings have not, so far, motivated GOP voters to look for another Republican to challenge Trump for the nomination.

Another one in 10 say that they are very likely to consider it, and 6% will definitely vote against Trump, no matter who else is on the ballot. 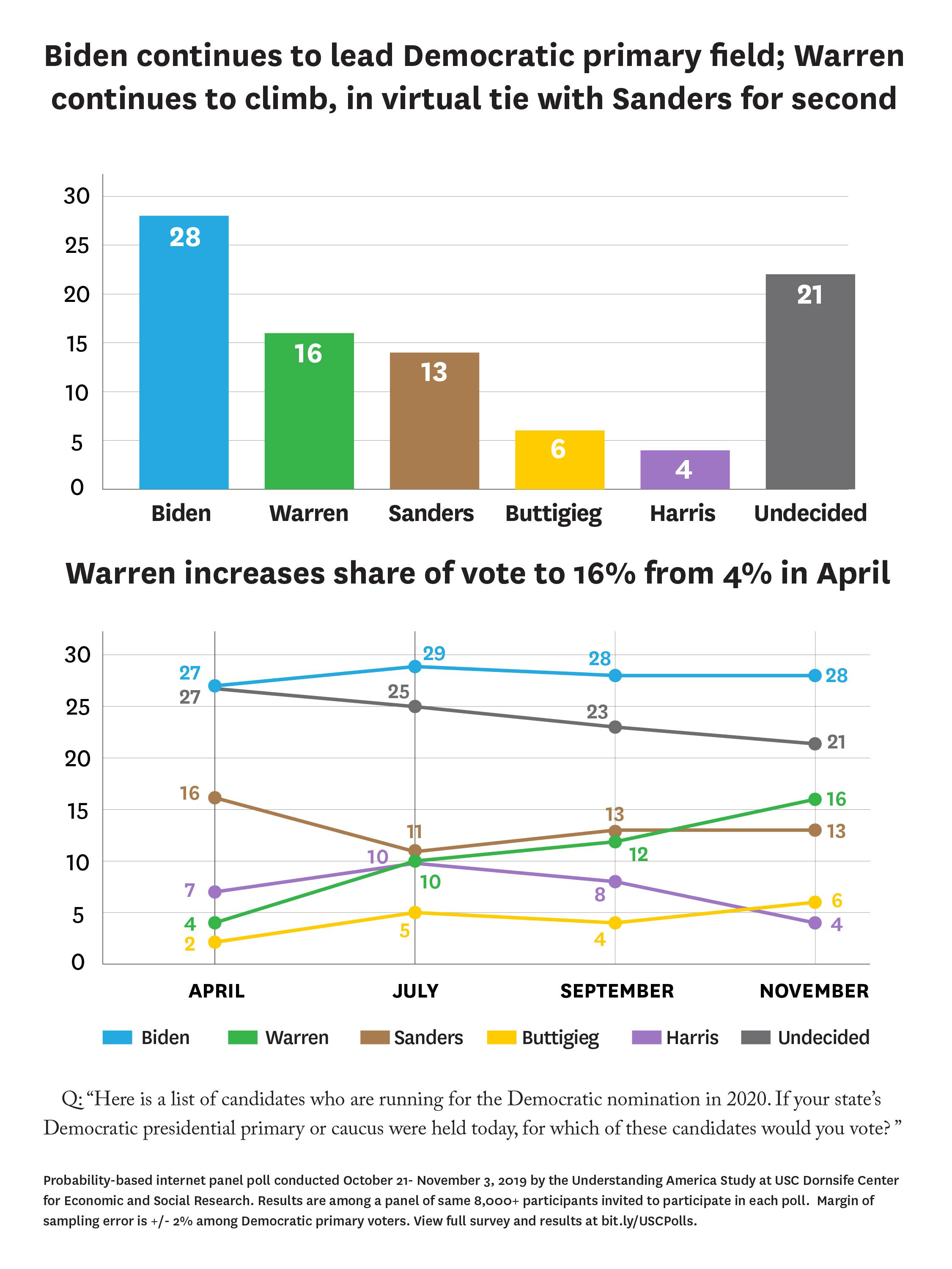 Trump’s accusations that Biden behaved unethically when he was vice president seems to have had little impact on Democratic voter support for the primary frontrunner, who continues to hold steady with 28%, giving him a lead over the 2nd place candidates that is outside the poll’s margin of sampling error. Even so, about one in five Democratic primary voters remain undecided.

Elizabeth Warren continued to gain support, climbing to 16% of the vote, up substantially from 4% measured in the April poll. Since the last poll in September, she has increased her standing among white voters and those who say they share her values.

The poll surveys from among the same panel members for each poll, giving it the ability to track how voters evolve in their support for the various candidates over time. Most of the Democratic candidates retained a majority of the voters who selected them in the last poll, with Sen. Kamala Harris being the exception. Only 4% Democratic primary voters now say they would vote for Harris, down from her high of 10%, and Warren picked up a significant chunk of Harris’ voters.

“A critical story here is what has happened to Kamala Harris,” Shrum said. “She started in an okay place in April, and she had a sugar high after the first debate. But now, the more people think about her, the less they are inclined to support her.”

Shrum said Harris’ recent campaign shakeups don’t solve her most fundamental problem: “She’s never created a compelling message. She’s good at asking questions but not answering questions, which I think is what happened in the debates, and unless she has some turning point moment, I don’t see how she recovers.”

“We are at the stage in the campaign where the national numbers are becoming less important than the early primary state races,” said Mike Murphy, co-director of the Center for the Political Future. “Biden still has a deep reservoir of affection and goodwill among Democrats nationally, but Warren and others are starting to move up in the early contests which will provide them a real boost should they win Iowa and New Hampshire. This race is not locked for anybody.”

Indeed, the poll found that, nationally, more than two out of 10 Democratic primary voters remain undecided, saying it is too soon to make up their minds. The poll asked undecided voters to choose from among a set of potential reasons for remaining uncommitted to a candidate, with the option to choose more than one option.

Democratic voters are not unhappy with, nor are they overwhelmed by the number of candidates. Only 4% said they are undecided because there are no good choices and only 3% said they like all and can’t decide between them.

Most undecided voters attributed their indecision to some version of just not getting around to thinking about it yet. Roughly four in 10 said it is just too soon and a similar proportion said that they don’t know enough about the candidates. One in four said they aren’t yet paying attention to the campaigns, and 16% said they are waiting to see what happens in the early primaries. 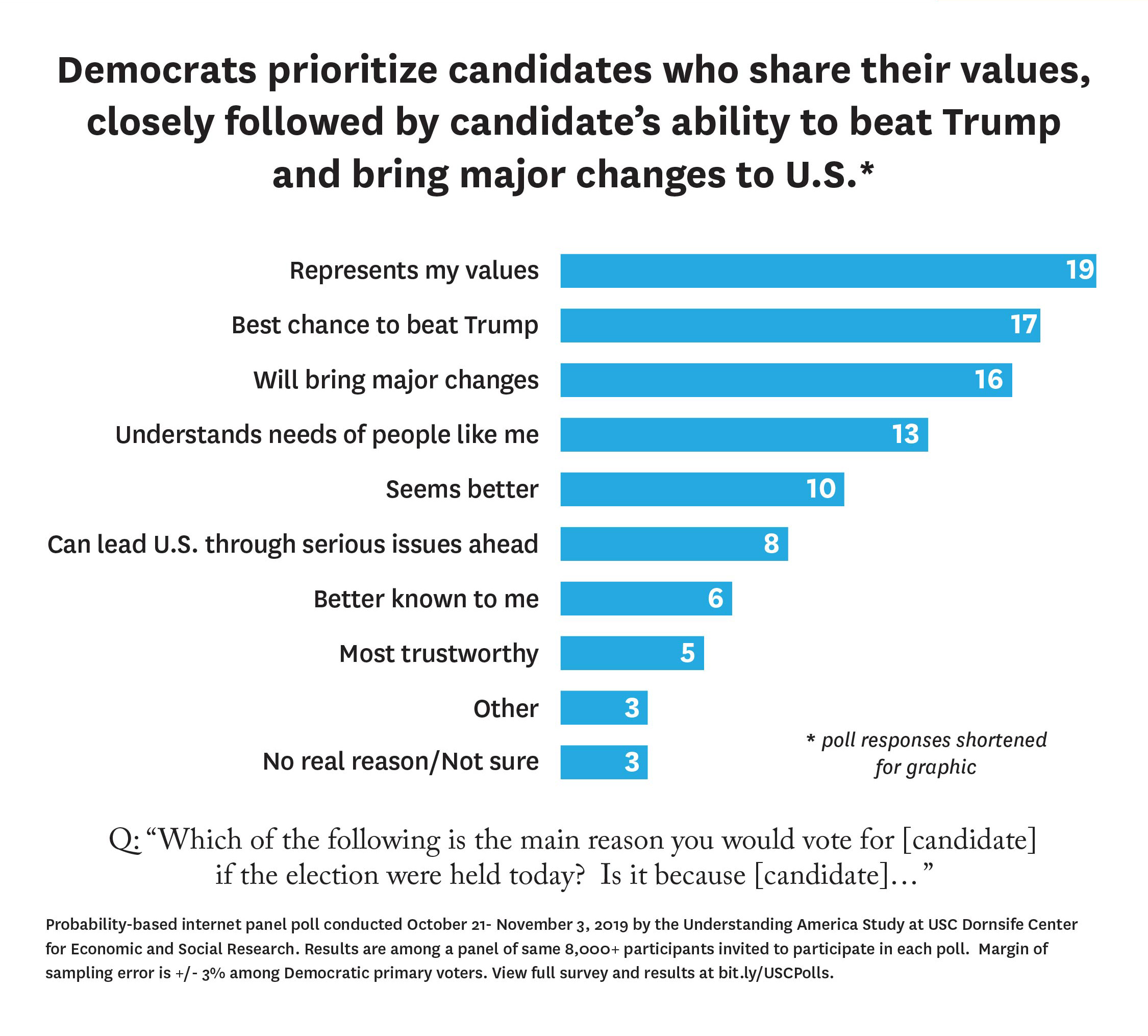 The poll shows Biden’s advantage in the national numbers stems largely from voter belief that he is best to defeat Trump. About one in six Democratic primary voters said they chose their candidate based on who can beat Trump in 2020, and 72% of that group are backing the former vice president. A slightly higher percentage of voters (19%) chose the candidate who best represents their own values and beliefs. Among those voters, Warren leads Sen. Bernie Sanders by 4 points, which is within the poll’s margin of error.

Poll methodology: The poll was conducted from Oct. 21 to Nov. 3, 2019, with 5,480 eligible voters. The voters are members of USC Dornsife’s Center for Economic and Social Research’s Understanding America Study (UAS) probability-based internet panel. The poll was conducted online in respondents’ choice of English or Spanish. The overall margin of sampling error is +/-2 percentage points for all eligible voters, +/-3 for Democratic primary voters, and +/- 2 points for Republican voters. Margins of error for other subgroups may be higher. Numbers may not add to 100% due to rounding.