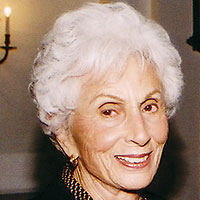 Carmen Warschaw is a USC alumna and trustee.

Thanks to a pledge of $3 million from USC trustee, philanthropist and community activist Carmen Warschaw ’39, a new endowed chair will be established in the political science department of USC College.

USC President Steven B. Sample said he was “exceptionally delighted” that the USC trustee chose to endow the Carmen H. and Louis Warschaw Chair in Practical Politics “during an election year that is capturing historic interest, especially on the part of young people.

“USC is committed not only to cultivating the life of the mind but also to nurturing engaged citizens,” Sample said. “The Warschaw Chair’s focus on practical politics promises to strengthen and enrich our students’ civic participation.”

Warschaw said she is encouraged by recent studies showing increased participation in politics by young voters.

“This is a very propitious time to start the chair, because this is the time when we have so many people active,” she said. “We want to keep them participating � people sometimes drop out if they don’t get exactly what they want.

“I have great faith in USC,” Warschaw said. “The things President Sample and the new dean have been doing recently are magnificent examples of what can be accomplished at a wonderful university.”

The Warschaw Chair is the first named chair in the political science department and the first endowed gift of USC College Dean Howard Gillman’s administration, which began in June 2007. It will be filled following a national search.

“A great college needs great benefactors, and Carmen Warschaw’s continuing generosity and support are an inspiration,” said Gillman, holder of the Anna H. Bing Dean’s Chair and professor of political science and history.

“Attaching one’s name to world-class scholarship on vital areas of inquiry is one of the most important ways that a person can have an enduring impact on an institution, as well as on the world. I am so very proud that USC College’s efforts to address the essential questions facing our democracy will be associated with the Warschaw name,” he said.

The new chair aims to inspire students to become more civically active and to understand they must continue to vote for our democracy to work. It will bring students together with elected officials, candidates and their staffs from across the political spectrum and on a nonpartisan basis for discussions. The Warschaw Chair will also have a role in developing courses and conferences meant to encourage students to participate in politics.

The daughter of immigrants, Warschaw pinpoints her parents’ enthusiasm for American democracy as an early influence in her own political involvement. Her life in politics began on campus at USC, as a member of the Young Democrats. She is a long-serving Democratic delegate, having attended every national convention since 1948.

Warschaw and her husband of 63 years, Louis, who died in 2001, helped found the College’s Casden Institute for the Study of the Jewish Role in American Life in 1998. The following year, the Warschaws established the Carmen and Louis Warschaw Distinguished Lecture Series, which brings together prominent national and local elected officials to speak on how their Jewish background influences their emphasis in political life.

Named the Los Angeles Times’ 1976 Woman of the Year, Warschaw was the first female chairman of California’s Fair Employment Practices Commission among many other offices. She was also on the first coastal commission in California and active in many Democratic Party offices, both nationally and statewide.

Her philanthropic profile reaches across Los Angeles. She and Louis Warschaw made numerous donations to Cedars-Sinai Medical Center, where she serves on the board of directors. She was a member of the Truman Library Institute, and currently is a member of the Otis Art Institute, the Music Center’s Blue Ribbon Committee and member of the Jewish Federal Council, where she served as chairman of their community relations committee � choice examples of her active involvement with many local nonprofits.

Louis Warschaw was a prominent business leader in banking, insurance and real estate. He was treasurer for California Gov. Edmund G. Brown’s first campaign for governor, and later became chair of the Los Angeles Board of Airport Commissioners.

A ceremony celebrating the creation of the new chair will take place at USC on Friday, May 2.