In a dry creek bed with sunlight filtering through sycamores and evergreens, a group of USC students sat and quietly contemplated their place in the world.

They had hiked along a winding and dusty trail into the heart of Devil’s Punchbowl, a sandstone formation etched into the slopes of the northern San Gabriel Mountains, to practice the meditative spiritual traditions of early Christians.

Many had grown up in the Christian faith but wanted to learn more about its contemplative roots. Others were curious about the so-called Desert Fathers and Desert Mothers who developed these meditation exercises hundreds of years ago. Some were simply seeking escape from the anxiety and pressures of everyday life. 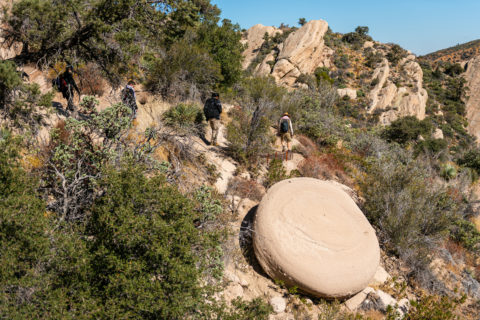 “It’s something that a lot of people are searching for but don’t know exists in the tradition they were brought up in,” said USC senior Jack Krone, who helped organize the trip. “You also get to go out and get away from the stresses of L.A. for a day while learning about contemplative Christianity in an environment that’s similar to where the early Christians would have been.”

On a recent weekend, Krone and the Rev. Jim Burklo, senior associate dean with the USC Office of Religious and Spiritual Life, led the once-a-semester expedition, a tradition they started last year. Once the group found a quiet spot to gather, Burklo explained the origins of the practice, known as Lectio Divina.

In the fourth and fifth centuries, Christianity had been adopted by the Romans as the state religion, he said. But some adherents felt the process had corrupted their belief system.

“Some people, wanting to get back to the real deal, the original spirit of Christianity, would go to the desert and hide out,” Burklo said.

In monastic communities or on their own in remote areas of Turkey, Syria and Egypt, they meditated and prayed in caves or huts, reflecting deeply on the meaning of spiritual passages and seeking a personal connection with a higher power. They wove baskets or mats to support themselves, Burklo said, but spent much of their time engaged in this contemplative practice, seeking what he called “mystical union with the divine.” 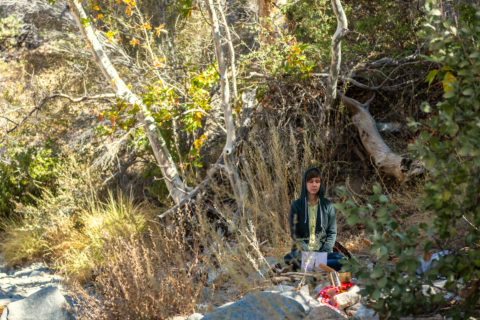 After reviewing the stages of the mindful exercise, the USC students found quiet areas along the creek bed to sit in contemplation. Then they gathered again to share what they had learned from their spiritual experiences over a simple lunch of cucumbers, crackers, hummus and fruit.

Krone, who is finishing his double major in applied mathematics and earth science at the USC Dornsife College of Letters, Arts and Sciences, grew up practicing Christianity but found himself drawn in a different direction as he got older.

“I was attracted to the spiritual traditions of the East, starting in high school, including meditation,” he said. “Only a couple of years ago did I start learning about the contemplative tradition within Christianity.”

He encouraged other students and members of the USC community to learn more about the meditative practices of Lectio Divina. It can help people deepen their religious or spiritual faith, he said, or give them a greater appreciation and understanding of the world around them.

“I would recommend that people look into it if they are interested,” Krone said. “Some places to start would be researching the Desert Fathers and Mothers or other contemporary people like Thomas Merton.”

A guide to contemplatio, an interfaith mindful prayer

Burklo led the students in an adaptation of Lectio Divina that he designed for people of any faith or with no religious affiliation. He described the four basic steps as outlined by 12th century French Catholic monk Guigo II: lectio, meditatio, oratio and contemplatio — reading, meditation, prayer and contemplation. 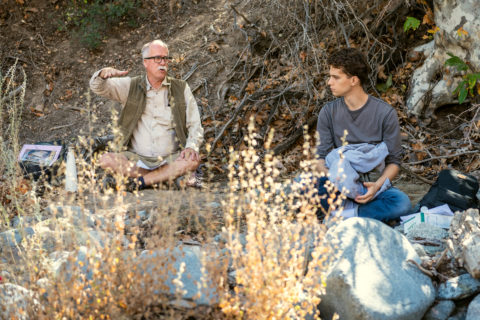 Lectio: Read a short passage from the scripture or wisdom literature of your choice. Release any interpretation or opinion you may have about this passage as you read it. To this you can add visio divina — or sacred seeing — by gazing at an icon, image or object while releasing any assumptions or judgments about it.

Meditatio: Close your eyes and let the passage or object “sink in” for two minutes. Sit with it. Hold it lightly — don’t force any attempt to interpret it. Attend to it without judgment or preconception and with an open heart.

As your time allows, repeat lectio and meditatio four times.

Oratio: Pray aloud: “May I receive from the scripture (or object) what my soul needs for today.”

Contemplatio: For 10 to 20 minutes, find a physical position in which your body is comfortable, but you’ll be unlikely to fall asleep. The lotus position, seated with legs crossed and tailbone slightly elevated on a pillow, is one way to achieve this balance. 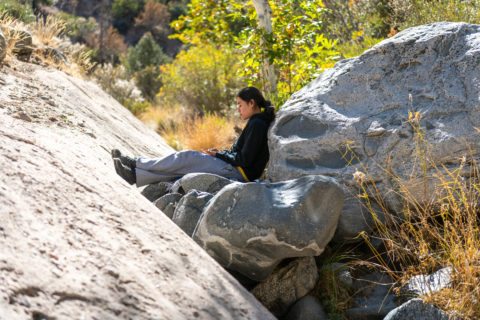 At the heart of contemplatio and other mindfulness practices is observing the present moment without judgment. (USC Photo/Eric Lindberg)

Begin with mindful meditation: Close your eyes, and in silence, observe whatever captures your attention. The object of your observation can be anything. A thought. An idea. A sensation. Something your body feels or something you hear. A memory. A plan for the future. It can be an urge, a desire or a sense of needing or wanting to do something. Let it all be. Don’t try to change your thoughts or experiences.

Wait until after your contemplatio practice to consider ways you want to change your thoughts or actions. Watch all that arises and passes, observing with nonjudgmental, caring attention. It can be helpful to take a Mindful USC class to prepare for this part of contemplatio.

“With practice, you will reach a point in contemplatio where you have so thoroughly and lovingly observed yourself — your thoughts, emotions, urges, sensations, body, mind and personality — that you will ask a profound question: Is that which is being observed doing the observing?” Burklo said. “Or is someone or something else watching and paying attention within you?”

Students, faculty members and staff members who would like further guidance in contemplatio practice can contact the Rev. Jim Burklo with the USC Office of Religious and Spiritual Life at burklo@usc.edu for an appointment.

Spirituality and Secularism Get Along at an Interfaith USC

College is a time of exploration, and USC has more chaplains and faith groups for spiritual introspection than any other U.S. university.

Even as America grows more diverse, religion has become more important in public discourse as well as on a personal level, according to Jim Burklo, USC associate dean of religious life. Yet Burklo believes that doesn’t have to create divisions.

At USC — with nearly 100 student religious groups — the Office of Religious Life is as diverse as the student body.