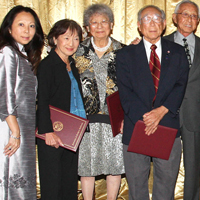 Setsuko Matsunaga Nishi was a junior at USC when the Japanese attacked Pearl Harbor on Dec. 7, 1941.

A little more than two months later, President Franklin Roosevelt issued Executive Order 9066, paving the way for American citizens of Japanese descent to be removed from their homes along the Pacific coast.

By spring, Nishi no longer was a student at USC but an internee at the Santa Anita Racetrack in Arcadia, awaiting clearance to continue her studies in the Midwest.

Hers is but one of many moving stories of Nisei (“second generation” in Japanese, though it refers to first-generation Japanese Americans) students, at universities all along the West Coast, forced to interrupt their schooling during World War II.

On behalf of USC President Steven B. Sample, and following a standing ovation, Martha Harris, senior vice president for University Relations, presented certificates of recognition to a small group of survivors (or their surviving family members) making them honorary alumni of USC.

According to Harris, “roughly 130 USC students of Japanese heritage were affected (by the forced internment.) … Looking back now, 66 years later,” she continued, “we understand the frustration, disappointment and pain suffered by our Japanese-American students … (But) despite the upheaval in their lives, their suffering from injustice on so many fronts, many of our Nisei students remained devoted Trojans and embodied those supreme Trojan values of courage, faithfulness and loyalty.”

Harris told the story of the late Jiro Oishi, a USC senior at the time Pearl Harbor was bombed. On the way to take the last final exam he needed to graduate, Oishi was taken away by the FBI and sent to federal prison in Montana. The authorities acknowledged arresting the wrong man, but after the war, when Oishi applied to USC to finish his degree, he was denied readmission.

Kodama, in his first year at USC, soon found himself behind barbed wire at the Gila River Relocation Camp in Arizona. His life had changed in an instant, from student to head provider for his family, his dream of becoming an attorney shattered.

Frank F. Chuman was already in the USC Law School when Executive Order 9066 came down on Feb. 19, 1942. Shocked that both Japanese-ancestry citizens and aliens alike were to be interned, he ended up at Manzanar, Calif., east of the Sierras, with 10,000 other evacuees.

He served as administrator of the camp’s army hospital, and in late 1943, was released to finish his law education in Ohio.

Thanks principally to the efforts of Jonathan T. Kaji ’76, president of the Asian Pacific Alumni Association’s board of directors, USC has now joined several other West Coast universities that have recognized their World War II-impacted Nisei students.

At the awards gala, USC Athletic Director Mike Garrett ’67, himself honored for his support of the association, announced that during the upcoming football season, a home game halftime would be dedicated to the Nisei students. And, on behalf of the association’s board, Senior Director for Alumni Relations Grace Shiba ’77 declared that an Honorary Nisei Student Scholarship would be established to mark the occasion.

“It’s a very nice thing, of course, and it’s hard to know what else the university can do,” said Nishi, in reference to the honorary certificate. “Still, there is no assurance it could never happen again. The precedent is that in times of emergency, (the government) can do anything, and that’s the part that keeps us under continued anxiety. I think the people of the United States have to understand what was wrong and why it happened and be absolutely sure to take steps that it won’t happen again.”