The attacks usually start at night, foreshadowed by barking dogs and the chatter of machine guns in the distance.

Then the soldiers come. They storm through the tiny hamlets in northeast Myanmar, sending residents scattering for their lives into the dense jungle. The attackers shoot down fleeing villagers, set houses on fire and throw children and elderly residents alike into the flames, and execute others captured during the brutal raids.

Those who survive the initial assault face a dangerous and exhausting scramble to the border with Bangladesh, where they crowd into makeshift shelters in an ever-growing refugee camp. It is in that camp that members of the Rohingya, a Muslim ethnic minority that has called Myanmar home for centuries, relate details of those disturbing and savage attacks. 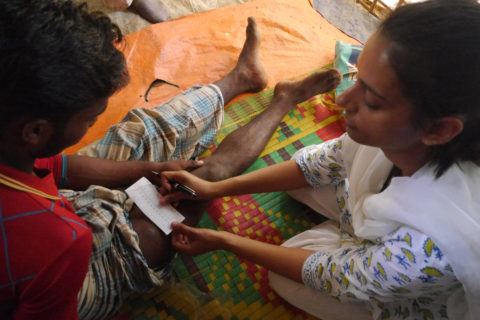 USC doctor Parveen Parmar measures a scar on the leg of a Rohingya refugee during a research trip exploring alleged human rights abuses in Myanmar. (Photo/Salahuddin Ahmed for Physicians for Human Rights)

Physician Parveen Parmar sits with each refugee and listens closely to stories of pain and terror. Then she begins the physical exam. She notes each scar, burn, injured arm or leg and other wounds that validate their accounts.

Her instinct is to empathize with her patients, but she also has to stay focused to painstakingly collect data. Balancing humanity and emotion with careful research is difficult work.

“It’s devastating to see the human toll of something like this,” she said. “It’s heartbreaking. It’s beyond words. Empathy is one thing, but it’s just — sometimes saying ‘I’m sorry this happened to you’ just isn’t enough.”

Although the USC doctor practices as an emergency room physician in Los Angeles, Parmar sees her mission as much broader: using her medical skills to bring attention to vulnerable and oppressed populations around the world. She had traveled to the refugee camp in Bangladesh with Physicians for Human Rights, a nonprofit that sends health professionals across the globe to document human rights violations.

“We now have extensive qualitative interviews and quantitative data measuring the ways in which the Myanmar government moved in supplies ahead of time, coordinated a military attack across a large geographic area, and conducted violent, brutal campaigns against men, women and children,” said Parmar, associate professor of clinical emergency medicine and chief of the Division of Global Emergency Medicine at the Keck School of Medicine of USC. “You can believe what you want to believe, but here’s the evidence. Here is the data. Here are the scars.”

In a recent series of peer-reviewed articles published in research journals, Parmar and her collaborators describe haunting interviews with dozens of Rohingya village leaders. They outline evidence from medical exams of gunshot wounds, sexual violence, burns and other severe injuries. And they share comprehensive findings from surveys with hundreds of refugees about the violence and destruction they fled.

It’s devastating to see the human toll of something like this. It’s heartbreaking.

The experience convinced Parmar that the Rohingya people had been targeted by coordinated and ongoing assaults that amount to mass atrocities and genocide.

“We’re talking about people across hundreds of miles saying the exact same thing happened to their villages,” she said. “We’re talking about 750,000 people who were so terrified of staying in their home that they fled to the border. We’re talking about dozens of people we interviewed in a short period of time who had very similar injuries and physical scars.

“There’s no doubt in my mind.”

The Rohingya have had roots in Rakhine State, along the western coast of Myanmar, since the 8th century A.D. But the government has argued they are foreigners who arrived recently from Bangladesh, and a law passed in 1982 essentially revoked their citizenship, leaving them stateless.

For decades, the Rohingya have faced severe restrictions on travel, education, marriage and other legal rights, Parmar said. Their persecution escalated most recently in August 2017 following an attack by an insurgent group, Arakan Rohingya Salvation Army, on Myanmar security forces that left 12 dead.

The Myanmar military, border patrol officers and other security personnel responded by attacking Rohingya villages throughout the region, according to satellite images and refugee reports, including evidence gathered by Parmar and others.

They used mortars, heavy artillery and machine guns during the onslaught, eyewitnesses reported, and attackers burned homes and fields while assaulting and killing fleeing civilians. Nearly 90% of the village leaders interviewed by the research team in the refugee camp described violence against their town, and 64% reported being attacked as they fled toward the border.

“They heartlessly beat all the people by machine guns,” a 42-year-old community leader from the township of Maungdaw told the researchers, as recounted in one of their articles. “Some women who were holding their crying babies were forced to get into the river, and the babies were thrown alive into the river. After that, the women were killed.”

Myanmar’s armed forces acknowledged the fighting but the government has argued that their actions did not violate the human rights of the Rohingya, stating that the offensive was a legitimate effort to quell a violent insurgency. Following the attacks, hundreds of thousands of Rohingya crossed into Bangladesh, joining 300,000 refugees already there. 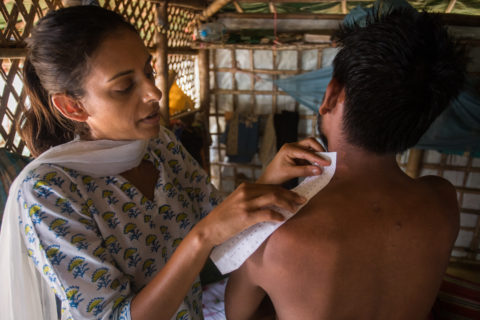 Unlike patients she treats in Los Angeles, Parmar said victims of the violence in Myanmar lack access to care for complex injuries and psychological trauma. (Photo/Salahuddin Ahmed for Physicians for Human Rights)

During her visit to the camp a few months after the August 2017 offensive, Parmar saw broken bones, gunshot wounds, burn scars and amputations. One man she examined had been shot in the shoulder, leaving him largely unable to use his dominant hand. Another man had been holding his son when an explosive hit him.

“Basically, he caught on fire, so he had burn marks on his face, hands, legs — any exposed part of his body,” Parmar said. “His child didn’t make it.”

When burn victims arrive at Los Angeles County+USC Medical Center, where Parmar works in the emergency department, she said they receive extensive treatment from a special unit to prevent infection and dehydration. They also get ongoing rehabilitation and monitoring as they heal.

“This injury happened to this man in his village, and he was lucky to survive,” Parmar said. “Then his family had to carry him across the border. It wasn’t until days later that he could get to a health care facility. Now he basically can’t use his hands in a fully functional way. He won’t be able to work as a day laborer to provide for his family, which is what he did before.”

Beyond physical injuries, she noted signs of mental anguish, including anger, depression and posttraumatic stress. Parmar said that despite their resilience, the Rohingya are increasingly demoralized after decades of oppression and the recent campaign of violence.

Since her visit to the refugee camp, no long-term solutions have emerged. Many Rohingya are too frightened to return to Myanmar, she said, and because they don’t have official refugee status, they can’t resettle elsewhere.

“We were there in the months after this event,” she said. “Now it’s been two years, and the people are still there. And unfortunately, aid is dwindling.”

Parmar remains hopeful that the evidence gathered by Physicians for Human Rights and other groups in the aftermath of the attack will serve as a foundation for future action. The nonprofit has shared its findings with human rights experts at the United Nations.

Even if the case goes to the International Criminal Court for prosecution of extreme violence and human rights violations, it will be a lengthy process, Parmar said. That would have frustrated her earlier in her career.

There is inherent value in these stories being recorded and remembered.

“The arc of justice is long, and I have a little more maturity now to know that,” she said. “I also think if somebody dies or is harmed in a situation like this, they deserve to have their story documented. Regardless of whether there is a successful prosecution of the perpetrators — although that is certainly what we all want — there is inherent value in these stories being recorded and remembered.”

Parmar first traveled to Bangladesh with Physicians for Human Rights in 2010 to meet with Rohingya refugees and report on the dire situation. When she returned in 2017, she was stunned to see how large the camp had grown.

Despite the best efforts of aid organizations and the Bangladeshi government, she said many needs are going unmet, especially treatment for complex injuries and psychological trauma. She encouraged people to help the Rohingya by supporting aid efforts and pressing their government representatives to take stronger action to care for refugees and hold the Myanmar government accountable.

“There are a million refugees sitting in this camp with literally nowhere to go,” Parmar said. “The level of despair and emotional distress, I can’t even imagine what it’s like now. I would have hoped we could have done a better job as an international community.”

Firsthand stories about the refugee experience — from vetting to resettlement

Personal anecdotes reveal the backstories of people who sought a fresh start in a new country.

After two decades, the clinic continues to help those who flee neighboring countries and represents them before the United Nations and Ugandan government.

Unaccompanied Central American children heading to the U.S. are the crux of research that began in a course on global social work.

Turkish natives envision a sustainable camp with a school, clinic, pharmacy and religious center in their home country.