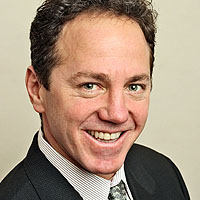 “We need to move our public school system out of the 19th century and into the 21st century,” Katzman said.

Noting that American public schools need innovative, compelling partners, Princeton Review founder John Katzman has established a partnership with the USC Rossier School of Education to harness the power of modern technology to train and certify teachers for urban schools.

Katzman and his wife, Alicia Ernst, have pledged $1.5 million toward the funding of an endowed chair in the USC Rossier School, with an additional $1 million provided by the Galaxy Institute of Education at USC.

The Katzman/Ernst Chair in Educational Entrepreneurship, Technology and Innovation will be instrumental in fulfilling the school’s vision of reinventing what it means to be a K-12 school in the 21st century.

On behalf of President Steven B. Sample, USC Provost C. L. Max Nikias formally announced the new partnership today at a ceremony on the USC campus.

“This exciting venture reflects USC’s highest aspirations in the 21st century,” Nikias said. “Our strategic plan challenges us to pursue research and scholarship that not only advances knowledge and thought but addresses issues critical to our community, our nation and the world. There may be no issue more critical than the education of our children � and particularly children in large urban areas.

“John Katzman has long demonstrated his commitment to education through his dynamic vision for the Princeton Review and its focus on K-12 schools as well as college advising and admission. USC is certainly proud to partner with him.”

A national search is under way to recruit a visionary and visible leader to hold the Katzman/Ernst Chair, someone who will convene a group of multidisciplinary scholars and establish a collaborative network of education providers, from public and charter school operators to for-profit educational-services companies � all with the focus of using 21st-century technology and methods to improve urban public education.

“We need new models,” Katzman said, “to teach students in our major cities to meet the challenges that face our country. We need to move our public school system out of the 19th century and into the 21st century.”

Karen Symms Gallagher, dean of the USC Rossier School of Education, praised Katzman for his vision and willingness to work with the school to break new ground.

“This is an unprecedented position within a school of education,” she said, “but one that has the potential to change the face of K-12 urban education as we currently know it. We are deeply grateful for the leadership and commitment of John Katzman and the Galaxy Institute in establishing this important new chair.

“At the USC Rossier School, we are proud to be pioneers in important new ways of thinking about urban education, locally, nationally and globally,” she added. “The Katzman/Ernst Chair is the appropriate next step in the long-term strategic thinking of the school. This chair will move us forward in utilizing the technology of today and tomorrow in a more aggressive and comprehensive way, blurring the boundaries between school, home and community, rethinking how teachers and technologies are used and bringing together the most innovative and creative forces at USC and beyond for greater success.”

Nearly 3,000 U.S. students drop out of high school every day � with a disproportionate percentage from low-income families, Gallagher said, adding that many of those who do graduate are inadequately prepared for college and the workplace.

“Despite growing awareness of the educational achievement gap for low-income children in our urban K-12 schools, and despite the best intentions of numerous national initiatives to address these problems, the gap persists, and is even growing,” she said.

“While school overcrowding, lack of credentialed teachers and dilapidated buildings are important factors, we also must admit the existence of deeper, more systemic causes,” she said. “Too many schools still adhere to a 19th-century model aimed at preparing a largely homogeneous population to succeed in an industrial economy. Meanwhile, student populations have become increasingly diverse. The industrial age has long since given way to an information age. The time is past for surface solutions that avoid addressing underlying causes.”