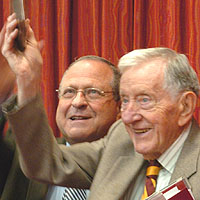 The USC Davis School of Gerontology commemorated the 90th birthday of its founding dean James E. Birren with a tribute at the Stever Courtyard on May 5.

Birren, blue eyes gleaming, looked fit and trim in his signature striped red and gold tie. Without using note cards, the talented orator dazzled a crowd of gerontology faculty, former students and luminaries in the field of aging.

Forced to overcome long-held dogmas about human development and aging, Birren discussed the gradual growth of gerontology into the indispensable academic discipline it is today.

“The idea of what it means to grow old has changed so much in my lifetime,” he said. “The elder years used to be looked at as a time to ‘find a new rocking chair,’ now the idea is ‘use it or lose it.’ ”

An expert in the areas of neurocognition and psychology, Birren established much of the framework of modern gerontological theory. His notion of “quality of life” as a multidimensional concept involving biological, psychological and socio-cultural domains is one of the core principles of the USC Davis School curriculum.

In 1950, Birren joined the National Institute of Mental Health and created the first section on aging. He came to USC 15 years later as dean and executive director of the Ethel Percy Andrus Gerontology Center, where he served until 1989.

In 2006, Birren returned to the USC Davis School to instruct a course on autobiographical writing. Using his own approach known as the Guided Autobiography Method, he helped a diverse group of students and Andrus Center volunteers to recall, organize and share life experiences.

“The vitality of the young intrigued the older people and in turn young people were inspired by the stories of the aged,” Birren said.

Following his presentation, an open microphone was available for friends, students and colleagues to comment.

Jon Pynoos, UPS Foundation Professor of Gerontology, Policy, Planning and Development, said Birren “is not only supportive and productive, he’s an example of what creative aging is all about.”

Merril Silverstein, professor of gerontology and sociology, said “reaching 90 as lucid and as good of shape as he’s in is as much of an inspiration as his contribution to the field.”

The celebration was co-hosted by the USC Emeriti Center.

A Case Study in Healthy Aging