Pamela Walls had been evicted from her rent-controlled apartment after the building was sold. The single mother of a teenage son tried to find a new place, something she found impossible because of rising rent costs.

“I never thought that would happen to me,” she said. “I was devastated.” 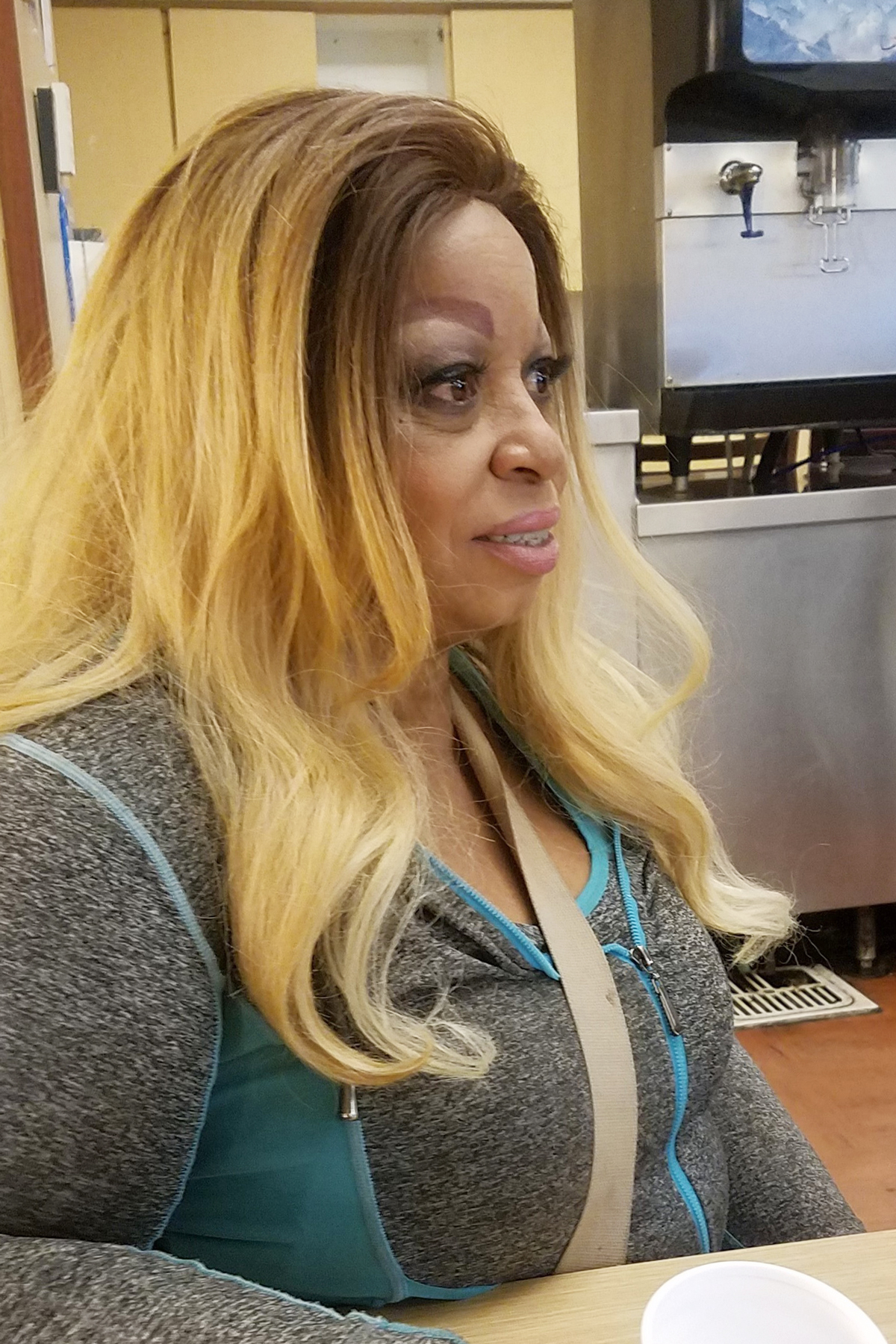 One day, she walked into the Downtown Women’s Center near Skid Row, a place she’s been visiting now for more than 10 years.

“There’s no other place like it,” said Walls, sitting inside the center. “This place gives you a feeling of warmth and love.”

And a hot meal. On this day at the start of the fall semester, that meal is being prepared by first-year medical students from the Keck School of Medicine of USC.

The group of about 20 students is working at the center as part of the school’s Volunteer Service Day. All around Los Angeles, dozens of USC medical students simultaneously hit the streets to volunteer at locations that include L.A. Animal Services, the Los Angeles Regional Food Bank, the Pasadena Senior Center, the Midnight Mission, the Violence Intervention Program, St. Francis Center, Lava Mae and the Audubon Center at Debs Park.

“Our mission is to create global citizens who will become advocates for patients and who will improve the overall health of society,” said Laura Mosqueda, dean of the Keck School of Medicine. “A key part of that mission is service — getting our students out into the community as soon as possible to begin serving those in need.” To that end, the school moved its annual Volunteer Service Day to the very beginning of the students’ academic journey at USC.

A life of medicine, a life of service

Preparing chicken for the women’s center lunch service is Keck School of Medicine curriculum director Azadeh Jalili, who notes the importance of holding the volunteer day early in the semester: “When you go into medicine, you’re going into a life of service … This is what they really signed up for: They are training to serve.” 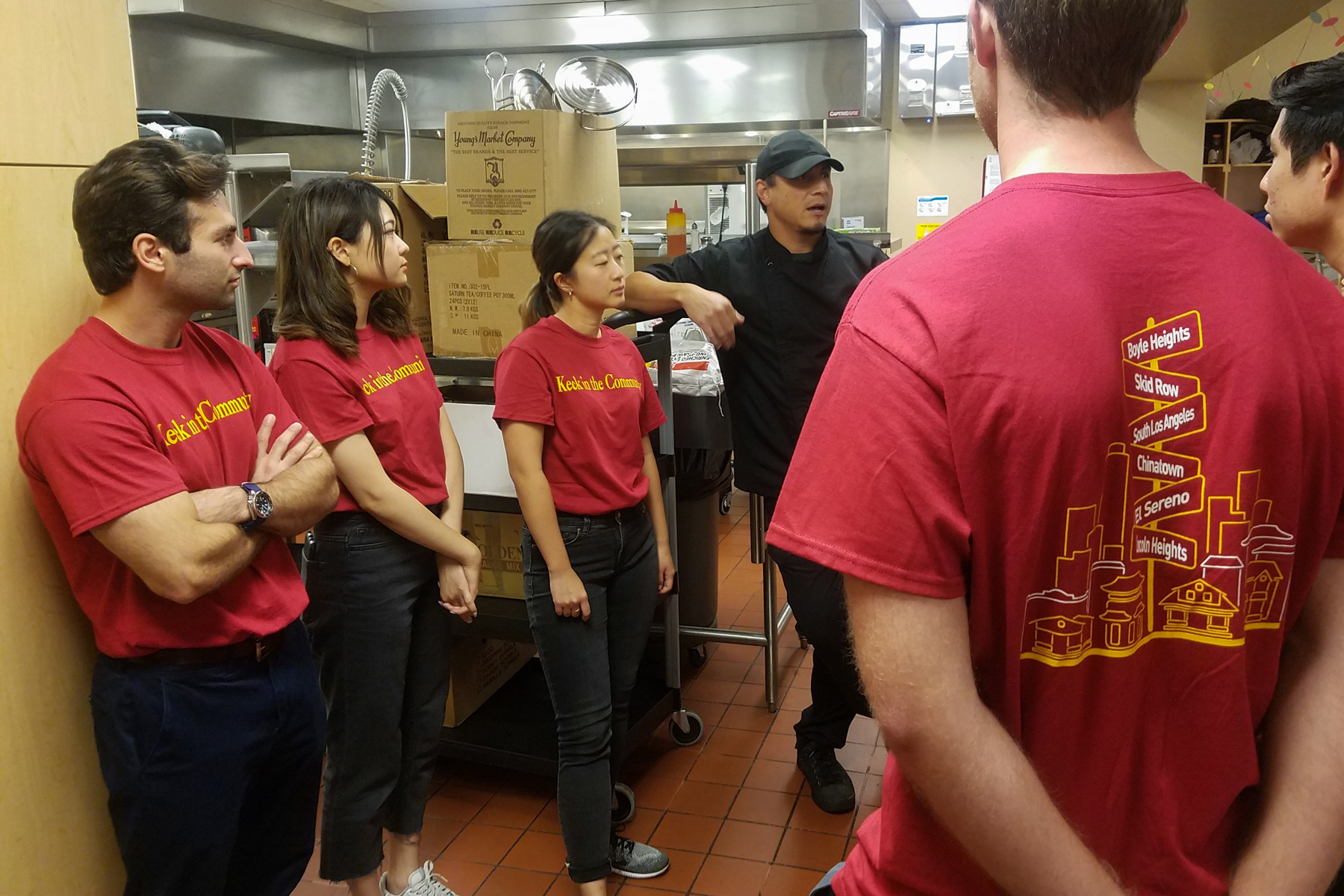 The Downtown Women’s Center serves three meals a day plus snacks, providing more than 110,000 meals a year. The center relies heavily on volunteers to make those meals possible.

“They are the backbone of the kitchen,” said Jorge Bastias, the center’s head cook. “We need all the help we can get.”

On this afternoon, students are getting ready to serve more than 100 meals to a packed center. The students work fast and feverishly in the kitchen wearing red “Keck in the Community” T-shirts, but it’s hard not to notice something else they are wearing: smiles.

Student Kristen Park even manages a grin while chopping onions.

“I think USC is in a really unique position in East L.A. and, as a medical student, it’s our primary duty to give back to the community,” she said. “I’m really excited we’re having this emphasis on serving in just our first week.”

Fellow student Nathan Kohrman, slicing peppers next to Park, agrees: “By virtue of being medical students, so many people have invested so much into us: ‘To whom much is given, much is expected.’”

Today, what is expected is prepping, cooking and serving chicken fajitas, Spanish rice, salad and fruit to women like Walls who would otherwise go hungry.

“It makes you feel at home, like someone really spent a lot of time in the kitchen just for you,” she said. “The meals are really healthy and nutritional.”

What it means to give back on Volunteer Service Day

But the center is much more than just a place to receive a warm and nutritious meal, according to Chief Program Officer Erika Hartman: It provides workforce development training as well as trauma recovery and mental health services.

The center serves about 200 women during the day, another 25 women for overnight shelter and some 4,000 women with housing and work programs, but Hartman said that the center could not operate without its volunteers. Hartman noted that the center’s 5,000 volunteers work hours equivalent to 25 full-time staff positions. 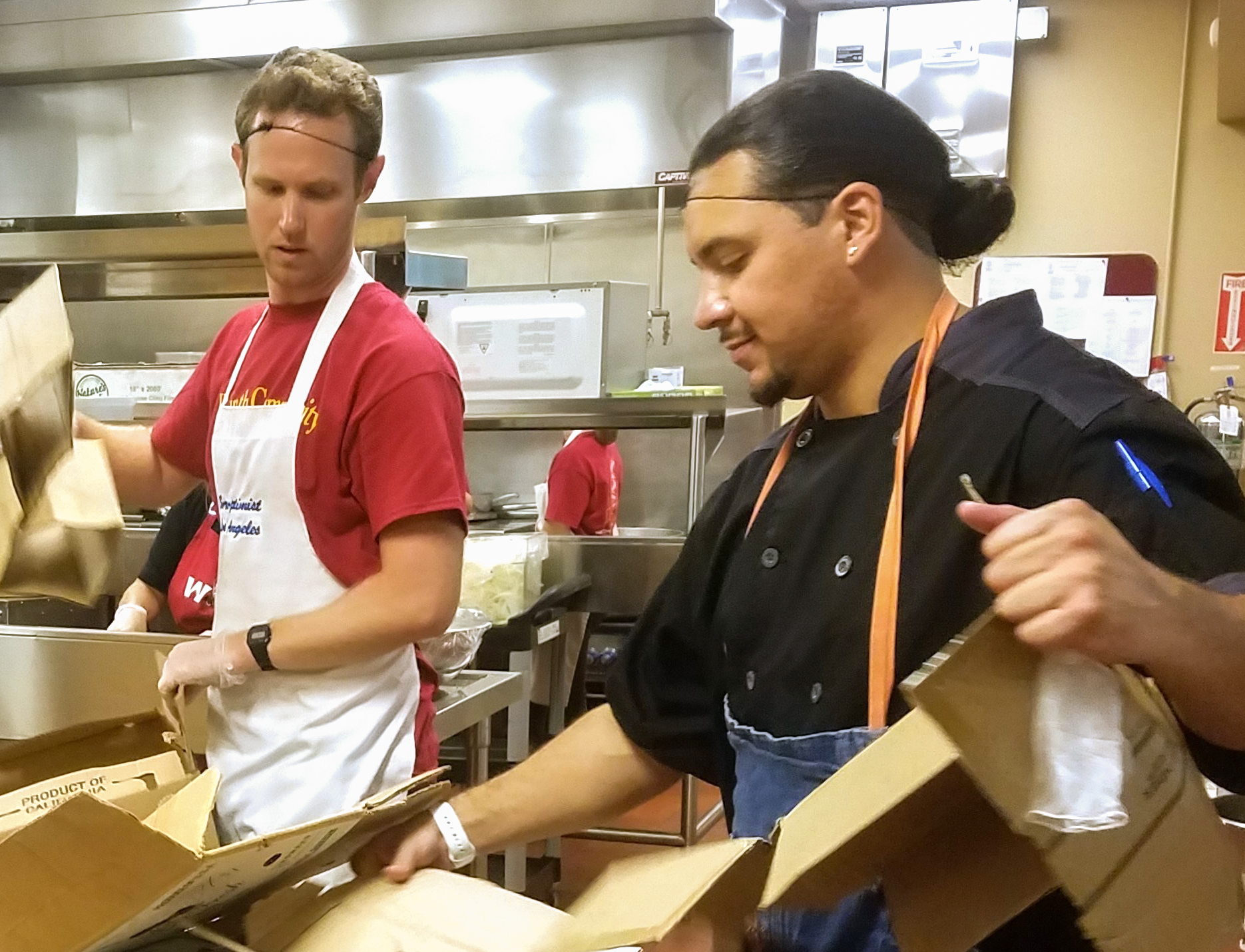 “They are an invaluable resource,” she said.

Kohrman said the value of volunteering isn’t lost on him. He understands that it’s more than preparing and serving food to people in need; it’s a lesson in becoming a doctor.

“This is great because it gives you a sense of the stakes of what we are studying,” Kohrman said. “Not every person can do everything, but everyone can do something,”

As Walls finished her meal, she glanced over at the USC students and smiles. She admitted that she was especially happy to see the students at the center because the university holds a special place in her heart.

“It’s a wonderful thing to have USC here,” Walls said. “I used to go to church on their campus at the Bovard Auditorium and I used to walk around the track to exercise. My son used to attend Big Brother-type programs there.”

As the Keck School of Medicine students clean up the kitchen and prepare to leave, Walls pointed out that she is a survivor thanks to the center and volunteers like USC’s medical students: She has moved into a one-bedroom apartment.

As for her son, the one-time homeless, single mother beams with pride.

Donors, volunteers and community partners came together to celebrate the 25th anniversary of the campaign that has generated over $25 million for more than 900 community-based programs.

Donation of more than 4,000 books aims to promote literacy in USC’s neighborhood

The books are earmarked for nine schools with K-5 programs within the USC Family of Schools and will be delivered via the USC Leslie and William McMorrow Neighborhood Academic Initiative.

How the ideas of engineers can help the homeless

A provider of homeless services in Los Angeles has an unlikely new partner: the USC Viterbi School of Engineering.

Community service initiative will provide dental treatment to underserved children over the next two years.

New USC medical students give back on Volunteer Service Day