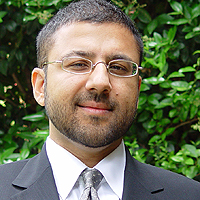 Soni, a member of the Hindu faith, spent part of his academic career in India, his native country.

Religious leader and scholar Varun Soni has been named dean of religious life at USC, marking the first appointment of a member of the Hindu faith as primary spiritual leader of an American university.

Soni, whose appointment is effective July 1, is a lawyer and religious scholar. He previously taught in the Law and Society Program at the University of California, Santa Barbara.

“In addition to his outstanding academic credentials and experience, Dean Soni brings a broad and impressive range of life experience,” Nikias said. “Dean Soni will bring together the spiritual and scholarly resources of the university, provide moral and ethical leadership for the USC community and work closely with the 70 student religious groups and the 35 religious directors on campus.”

“I feel deeply honored and humbled to be the next dean of religious life at USC. The Office of Religious Life at USC has the extraordinary opportunity to facilitate interfaith dialogue and sponsor events that support religious and spiritual life on campus while also utilizing the many resources in Los Angeles, the world’s most religiously diverse city,” Soni said.

Soni’s interest in world religions is long-standing: As an undergraduate, he spent a semester living as a Buddhist monk in a Burmese monastery in Bodh Gaya, India, through the Buddhist Studies Program at Antioch University. As a graduate student, he spent months doing field research in South Asia through UC Santa Barbara’s Center for Sikh and Punjab Studies. A native of India, he was raised in Southern California.

Soni will follow in the steps of outgoing USC Dean of Religious Life Rabbi Susan Laemmle, who is retiring this year.

Laemmle was also a pioneer. She was the first non-Christian to lead a major American university in religious life.

“I look forward to building upon Rabbi Laemmle’s profound legacy of encouraging the pursuit of meaning through spiritual reflection and providing opportunities and forums to participate in religious life,” Soni said.

USC enrolls the largest community of international students at an American university, with more than 7,000 scholars from more than 100 nations studying at the undergraduate, graduate and doctoral levels.