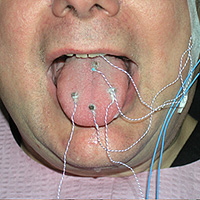 In the field of articulatory phonology, USC scholars use state-of-art technology to show how the abstract structure of language interacts with the actual movements of the mouth.

James Higginbotham, Distinguished Professor of Philosophy and Linguistics, stopped the rapid-fire, hunt-and-peck typing on his electric typewriter to answer a reporter’s question.

The scholar of international repute had been asked to summarize Noam Chomsky’s theory of language and mind � a bit like asking someone to explain in a nutshell Einstein’s theory of relativity or Freud’s theory of the unconscious.

“The fact is that any healthy child can learn any language and with not very much exposure,” said the USC College chair of linguistics. “That’s an empirical fact. We want to know how this little cognitive miracle takes place.”

Pioneered by Chomsky in 1957, the modern study of language and mind investigates the human mind through a systematic analysis of how people produce and understand language.

In large part, it seeks to answer a fundamental question: How do we acquire our first language and communicate with one another without being expressly taught? Chomsky � the father of modern linguistics � was the first to declare that language emanates not from culture and learning but from biology.

In the College, research of language and mind is a growing interdisciplinary area, tapping both the sciences and humanities to answer these colossal queries.

In recent years, the College has gained a national reputation for its interdisciplinary collaborations stemming from Chomsky’s theory that an inborn mental endowment allows human beings to acquire, execute and understand language.

Higginbotham is among a growing community of renowned scholars in the College whose research has evolved, in many cases directly, from the Chomsky revolution.

Holder of the Linda MacDonald Hilf Chair in Philosophy, Higginbotham was a colleague of Chomsky’s for 13 years at the Massachusetts Institute of Technology.

“MIT became the center of this new subject, and it’s now well represented here at the College,” said Higginbotham, a preeminent scholar of generative grammar and linguistic semantics.

The College faculty includes a number of Chomsky’s students, such as linguists Hagit Borer, Maria Luisa Zubizarreta and Barry Schein. Also Higginbotham’s student at MIT, Schein is an original designer of the College’s general education language and mind course.

“Naturally, as generation begets generation, the effort expands and there comes to be different kinds of views on the subject,” Higginbotham said. “(The language and mind endeavor at the College) can be looked at as an extension of that Chomsky revolution in linguistics. Although let’s be clear that not all of our scholars, especially behavioral scientists in the College, agree with all of Chomsky’s views.”

One exciting collaboration brings together faculty and students from the College’s Department of Linguistics and the USC Viterbi School of Engineering.

In 2005 and 2006, the National Institutes of Health awarded two grants totaling over $4.5 million to support the research of Dani Byrd, professor of linguistics, and Shri Narayanan, the Andrew J. Viterbi Professor in the Ming Hsieh Department of Electrical Engineering, who has joint appointments in linguistics, psychology and computer science.

Byrd, also the College vice dean overseeing research, and Narayanan use real-time magnetic resonance imaging of the human vocal tract to examine the role that linguistic structure plays in shaping the production of speech. Their team includes professor Krishna Nayak and Ph.D. student Erik Bresch, both of electrical engineering.

Their state-of-the-art imaging and signal processing examine language structured by the human brain as it is realized by the speech articulators in the mouth.

“We don’t do it with ESP,” she said. “There’s no rigid dichotomy between mind and body. So there are philosophers and cognitive scientists who recognize that how we cognitively understand the world is not unrelated to how we physically exist in the world, and how we move in the world and act in the world.

A Few Complex Words to Live By