A USC-led research team has found that marine microbes with a special metabolism could play an important role in how Earth regulates climate.

The study finds marine bacteria containing rhodopsins, a sunshine-grabbing pigment, are more abundant than once thought. Unlike algae, they don’t pull carbon dioxide out of the air. And they will likely become more abundant in warming oceans, signaling a shuffling of microbial communities at the base of the food chain where the nitty-gritty work of energy conversion occurs.

“Oceans are important for climate change because they play a key role in the carbon cycle. Understanding how that works, and the marine organisms involved, helps us refine our climate models to predict climate in the future,” said Laura Gómez-Consarnau, assistant professor (research) of biology at the USC Dornsife College of Letters, Arts and Sciences.

The study appears today in Science Advances. Gómez-Consarnau is the lead author among an international team of scientists from California, China, the United Kingdom and Spain.

How rhodopsins could impact global warming

The findings break from the traditional interpretation of marine ecology found in textbooks, which states that nearly all sunlight in the ocean is captured by chlorophyll in algae. Instead, rhodopsin-equipped bacteria function like hybrid cars, powered by organic matter when available — as most bacteria are — and by sunlight when nutrients are scarce. 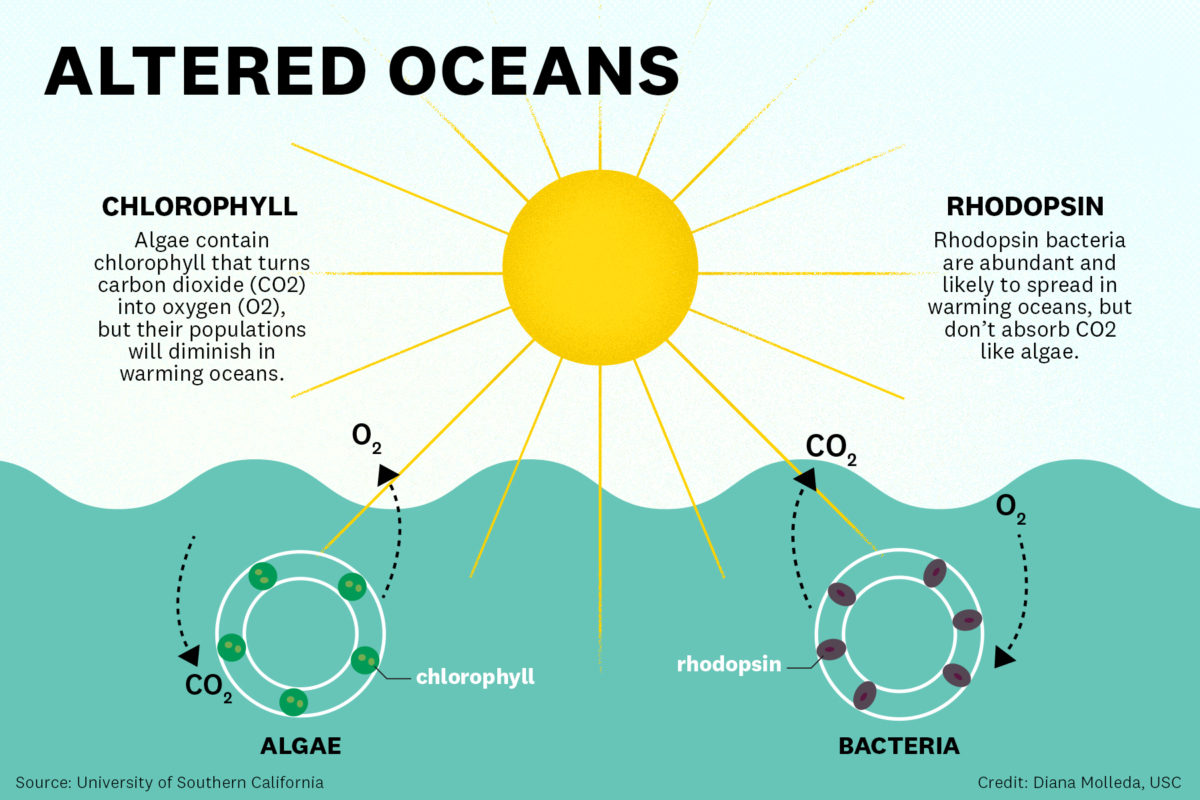 Rhodopsins were discovered 20 years ago, and scientists at USC and elsewhere have been studying their prevalence and metabolism since. These microbes have light-sensitive protein systems in their cell membranes that trap sunlight, an adaptation analogous to how rods and cones in the human eye gather light.

In this study, researchers trolled a 3,000-mile-long swath of the eastern Atlantic Ocean and Mediterranean Sea in 2014. They sampled microorganisms in the water column down to 200 meters in an attempt to find how widespread rhodopsins are and in what conditions they are favored.

They found that rhodopsin photosystems were much more abundant than previously realized and concentrated in nutrient-poor waters. In such oligotrophic zones, they outperform algae at capturing light. While algae use sunlight and CO2 to produce organic material and oxygen, rhodopsin pigments use light to make adenosine triphosphate, the basic energy currency that drives many cellular processes.

“Rhodopsins appear to be more abundant in a nutrient-poor ocean, and in the future, the ocean will be more nutrient-poor as temperatures change,” Gómez-Consarnau explained. “With fewer nutrients near the surface, algae will have limited photosynthesis and the rhodopsin process will be more abundant. We may have a shift in the future, which means the ocean won’t be able to absorb as much carbon as it does today. More CO2 gas may remain in the atmosphere, and the planet may warm faster.”

So far, computer simulations of what global warming could be like in the future do not yet account for this microbial shift.

Previous studies have shown rhodopsins comprise about 80% of the marine bacteria, based on genetic analyses. But this is the first study to actually measure their concentration in the ocean and where they like to congregate.

The study underscores how scientists are learning new pathways by which organisms gain energy to live. For example, they’ve long known that plants and algae use chlorophyll to convert sunshine and nutrients into sugar. About half of all photosynthesis on Earth is performed by algae at the ocean surface. And they’ve discovered bottom-dwelling life supported by chemical energy from minerals and chemical compounds released from deep ocean volcanic vents. In this study, they’ve learned that bacteria — long considered mainly decomposers in an ecosystem — can actually function as a main producer of energy at the ocean surface.

“We estimate that, given the concentrations found in seawater, rhodopsins could capture more light energy than chlorophyll in the ocean,” Gómez-Consarnau said. “These findings change the fundamental assumption that the marine biosphere is only powered by sunlight captured by chlorophylls during algal photosynthesis.”

It also means that, years in the future, microbial communities will likely shift, resulting in less carbon fixation in the ocean. To fully evaluate how the findings affect the ocean’s capacity to absorb greenhouse gases, Gómez-Consarnau said CO2 fluxes in marine systems will need to be reevaluated and future climate models will have to include this bacterial metabolism.

Gómez-Consarnau is the lead author of the study, joined by colleagues Sergio A. Sañudo-Wilhelmy, Naomi M. Levine, Jed A. Fuhrman and Lynda S. Cutter at the USC Dornsife College; John A. Raven of the University of Dundee in Scotland; Deli Wang of the State Key Laboratory of Marine Environmental Science, Xiamen in China; Brian Seegers of the Scripps Research Institute in California; Javier Arístegui of the Universidad de Las Palmas de Gran Canaria in Spain; and Josep M. Gasol of the Institut de Ciències del Mar-CMIMA (CSIC) in Spain.

USC grad student brings back dynamic data from one of the world’s most sophisticated research vessels, allowing scientists to grow organisms that have never been found in nature.

A new microbe goes under the microscope at USC

Community college students from across the country get a rare opportunity to learn about ecology in the lab.

How bacteria adapt to hostile environments

USC Viterbi researchers use computer-based models to identify the ways that spores evade attack from chemicals and radiation.