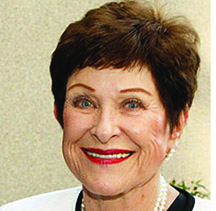 In recognition of her service, generosity and guidance to USC and numerous organizations that support children, health care, medical research, education and the arts, the University has honored philanthropist and USC trustee Harlyne J. Norris as a Doctor of Humane Letters.

Her family is well-known for its longtime dedication to USC and community enhancement. Norris has been a USC trustee since 2000, and she is a trustee and past chairman of the Kenneth T. and Eileen L. Norris Foundation, which was established in 1963 by her husband’s parents, Kenneth Sr. and Eileen Norris.

Through the Norris Foundation, the Norris family has given nearly $50 million to USC. The Harlyne J. Norris Cancer Research Tower within the USC/Norris Comprehensive Cancer Center on USC’s Health Sciences campus is named in her honor.

A native of Southern California, Norris grew up in Santa Monica and attended UCLA. She was active in school and community groups as her children grew up. Her late husband, Ken Norris Jr., was a USC alumnus and trustee who played an instrumental role in the creation of the USC/Kenneth T. Norris Jr. Comprehensive Cancer Center – a facility that is renowned for its research and patient care.

The 10-story Harlyne J. Norris Cancer Research Tower is an expansion of the cancer center. Its opening in 2007 dramatically increased laboratory research space for the Keck School of Medicine of USC.

Highly esteemed for her compassion and leadership, Norris is a member of the advisory board of the USC/Norris Comprehensive Cancer Center as well as a trustee of Marymount College, an advisory board member of the Accelerated School and a board member of Little Company of Mary Hospital. She is also a director of Blue Ribbon, which supports the Los Angeles Music Center, and an overseer of the Huntington Library, Art Collections and Botanical Gardens.

She is a strong supporter of the Norris Performing Arts Center, Peninsula Education Foundation and Help the Homeless Help Themselves. Other beneficiaries of her generosity are the Blind Children’s Learning Center, Para Los Niños, the Boys and Girls Clubs and the California Institute of Technology.

News from the USC Alumni Association

Lingual Verve to host The House of God talk