To figure out how the body changes over time, researchers are increasingly looking to understand epigenetics, the study of changes in organisms caused by modification of gene expression rather than alteration of the genetic code itself. This scientific endeavor extends to teeth as well.

Yang Chai, associate dean of research at the Herman Ostrow School of Dentistry of USC, reported in a recent article how he and colleagues discovered that epigenetic regulation can control tooth root patterning and development.

“This is an aspect that doesn’t involve change in the DNA sequence, but it’s basically through the control where you make the genes available or unavailable for transcription, which can determine the pattern,” he explained.

A protein called Ezh2 helps the bones of the face to develop, but it was not known how it affects tooth root development, the authors wrote. So the team looked at what happens when Ezh2 is not present in the molar teeth of developing mice. They found that Ezh2 and another protein called Arid1a must be in balance to establish the tooth root pattern and the proper integration of roots with the jaw bones.

The goal: To someday regrow teeth, first regenerate the roots 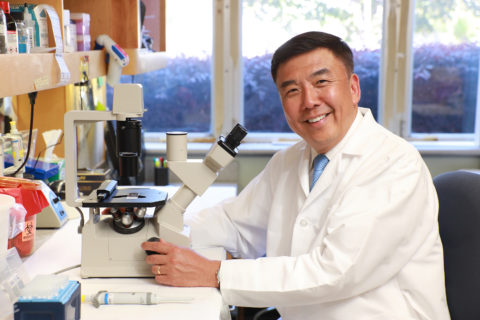 Yang Chai says that changes in our diet and environment affect how our bodies regulate our genes, which is evident in the difference between the formation of our teeth and those of ancient humans. (Photo/Phil Channing)

Chai said the new work is motivating: “I feel excited about this because, through human evolution, there have been changes in our diet and environment that can influence our epigenome — the ways our genes are regulated – and you can clearly see a difference between the root formation of our dentition versus Neanderthals.”

Neanderthal molars have longer root trunks than the ones seen in anatomically modern humans and show late splitting of the roots, which could be due to the effect of diet and exercise on the proteins that turn the genes on and off.

“These epigenetic regulators, which are not changing the DNA sequences, are important in themselves, but their level of their activity is also important,” he said. “Basically, you can’t have too much or too little — if the balance is off track, then you get developmental problems or disease.”

The ultimate goal of Chai’s research on the regulation of tooth development is to regrow teeth — but generating an entire tooth is very challenging because it takes a long time for nature to build a tooth from development to eruption, Chai explained. So he aims to find ways to regenerate a molar root, and put a crown on top.

“It would be the best of both worlds: a natural integration of the root with the jawbone with the periodontal ligament in place, and a reduction in the amount of time we need by using just a crown to restore function,” he said.

Microdentistry is now part of the USC dental curriculum, and its focus on stopping cavities early and without drills can make a big difference for patients with dental anxiety.

When an LAFC player suffers a mouth injury, Trojan dentists spring to action

A trio of Ostrow School alums provide both emergency and routine dental care for players on the Los Angeles Football Club, combining a love of sports and dentistry.