Few things have changed Andrew “Jupiter” Oropeza’s life as much as Troy Camp.

A shy kid, he often spent recess at John W. Mack Elementary School buried in a book. The weeklong trip into the mountains with the popular USC student-run camp and mentorship initiative helped him come out of his shell.

Troy Camp counselors also tutored him and gave him advice on SAT prep and college applications. He gained practical skills through Troy Camp’s high school leadership program, like getting his driver’s license and learning how to open a bank account and save money.

And he developed a desire to help others, inspired by seeing how counselors rallied their campers to lift the spirits of a friend who was feeling homesick.

“I realized everyone needs a helping hand every once in a while. That’s one of the big reasons I wanted to go to USC, to come back to Troy Camp and be a counselor to kids who are in the shoes I used to be in,” Oropeza said. “I definitely wanted more responsibility, but even more than that, I wanted to be a part of the magic of camp.” 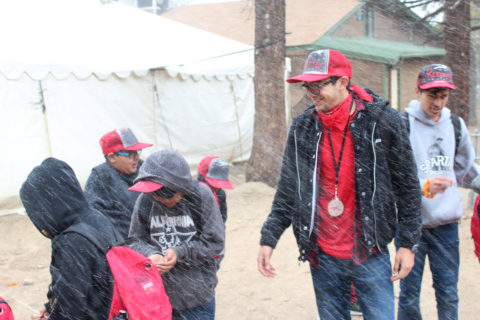 Now a rising sophomore at USC, he returned to Troy Camp this summer as a volunteer counselor known to the campers as “Jupiter” (every counselor gets a nickname that often sticks for life). He’s one of a handful of Los Angeles children who thrived in the mentorship program and, after getting into USC, committed themselves to repaying the favor as camp counselors.

They are powerful role models who bond with their campers over shared experiences and empower them to dream big about their future.

“That’s the key component of these success stories, that mentoring is happening everywhere in Troy Camp. That’s the special sauce of how all this works,” said former counselor Celso “Grinder” Delgado Jr., now one of Troy Camp’s faculty advisors and associate professor of clinical occupational therapy at the USC Mrs. T.H. Chan Division of Occupational Science and Occupational Therapy.

What started more than 70 years ago as a weeklong trip to the forest for elementary school kids from USC’s neighborhood has grown into something much bigger. Now campers receive academic and mentoring support throughout the year as they progress into middle and high school. Thousands of children have made lifelong friends and gained confidence in their abilities through the program, which is provided to them at no cost.

Monique “Skrrt” Mejia can attest to that fact. She spent two summers in Troy Camp while attending 32nd Street School/USC Performing Arts Magnet. Now 28, she just finished her master’s degree in teaching at the USC Rossier School of Education and will be a fourth-grade teacher at nearby Dr. Theodore T. Alexander Jr. Science Center School. 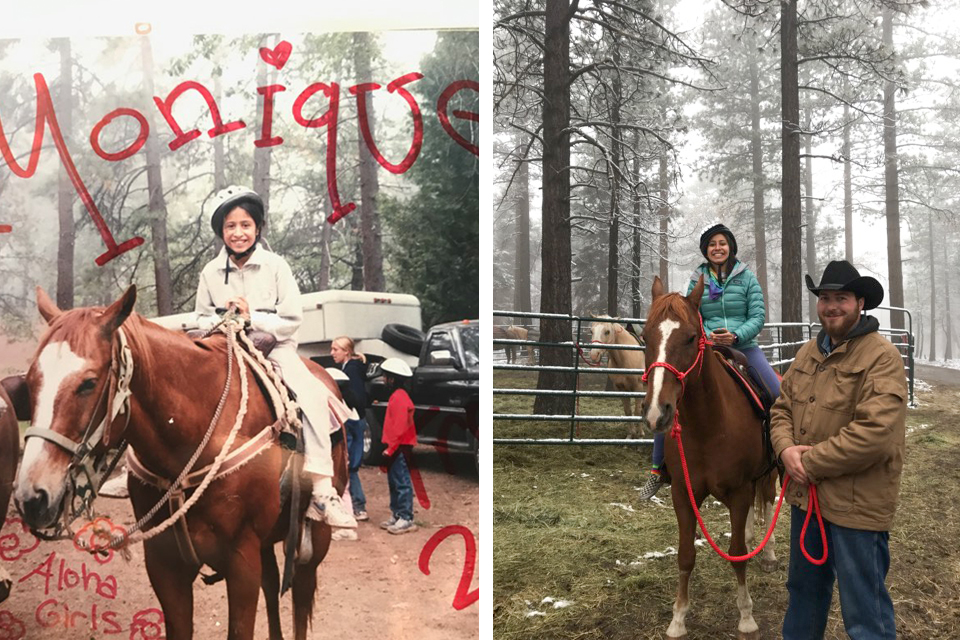 “I am living proof that 20 years after camp, they will remember every single experience,” she said. “We create that much of an impact for these kids. I can still see the faces of the people I met and bonded with out there.”

Mejia fell in love with the outdoors as a camper, relishing her first time riding a horse, collecting pine cones and sleeping under the stars. She was so enthralled by her Troy Camp experience, she jumped at the chance to be a junior counselor while at Hollywood High School.

She enjoyed the increased responsibility and leadership experience, so when she enrolled at USC a decade later as a master’s student, she signed up as a full counselor. She was stunned to see how much the initiative’s year-round programming had expanded.

“I was mind-blown,” she said. “It is so cool that we stick with them as middle schoolers and high schoolers now.”

I can still see the faces of the people I met and bonded with out there.

And the weeklong summer camp lived up to her expectations. She connected with campers and watched them thrill in many of the same experiences she had as a kid. When she starts her teaching career this fall, she plans to encourage her students to apply to Troy Camp, especially those who seem shy or scared to try new things.

“Going into the classroom with this experience and showing them my pictures will help them realize that branching out and seeing other parts of the world is memorable,” Mejia said.

Even for counselors who experienced Troy Camp as children, the summer trip to the San Bernardino National Forest can still awe and surprise them. Julia “Rocky Road” Silva recounted how excited this year’s campers were to wake up to find snow falling outside. 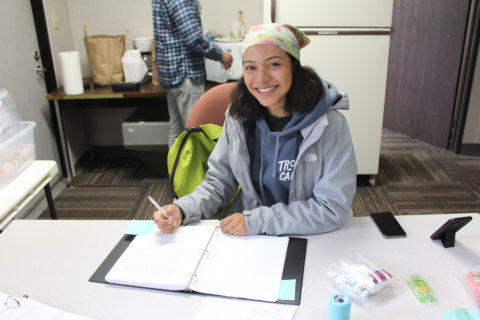 “That was actually the first time I saw snow fall, too,” she said. “I thought, wow, this is another first at Troy Camp, even at this age!”

A rising junior studying global health at the Keck School of Medicine of USC, Silva attended Troy Camp as a fourth grader at 32nd Street School/USC Performing Arts Magnet. She reunited with the program as a junior counselor while studying at the Ramón C. Cortines School of Visual and Performing Arts.

Now a full counselor, Silva feels she has a special perspective when mentoring kids through during the summer camp and year-round programs.

“I feel like I’ve experienced a lot of the same things these students have experienced,” she said. “Being in my community, because I’ve stayed here my whole life, it just gives me the confidence to give them advice and share what Troy Camp has done for me.”

Both of Silva’s parents are educators. Her mom teaches first grade and her father works with special education students. But as she prepared to apply to college several years ago, she was searching for guidance from someone closer to her age.

She found an ideal mentor in Alex “Tiny Dancer” Chen. He helped her polish her college essays and get ready for interviews with admissions officers by inviting other counselors to grill her with tough questions.

“It was intimidating, but it really prepared me,” Silva said.

Now she offers similar advice and guidance to students in Troy Camp, helping them think about their options for the future.

“Being someone who can provide mentorship through Troy Camp and other organizations — I mean, of course,” she said. “Why wouldn’t I want to give back?”

A lifelong Trojan mentors the next generation through Troy Camp 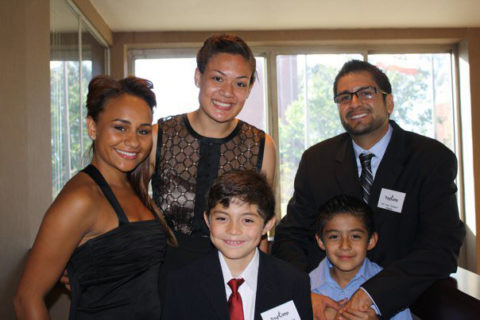 Oropeza has the same mentality. The narrative studies major at the USC Dornsife College of Letters, Arts and Sciences credits much of his academic success to the leadership training and tutoring support he got as a camper and junior counselor in Troy Camp.

He grew up across the street from the University Park Campus and remembers hearing the USC Trojan Marching Band practicing early in the morning. When his elementary school let students wear college shirts on Mondays, he would represent the Trojans in cardinal and gold.

“It wasn’t just any college. It was USC,” he said. “USC was the goal, and that’s what kept me motivated all these years.”

He gained important skills like learning how to handle stress and prepare for high school through Troy Camp’s middle school program, Leaders in Training. As a high school student at James A. Foshay Learning Center, Oropeza got help from counselors with his college applications, along with tips on public speaking and interviews.

USC was the goal, and that’s what kept me motivated all these years.

When he announced his acceptance to USC online, he got a flood of congratulatory calls and texts from former counselors and campers. There was never any question he’d enroll as a Trojan, and applying to be a Troy Camp counselor was the first item on his to-do list last fall.

He wants to make sure the next generation of local kids has the same magical and inspiring experience he had years ago.

“If I can sum up Troy Camp in one word, it would definitely be opportunity,” Oropeza said. “It leads to so many great things for the kids, but also for the counselors. Everyone gets so much out of it, and it’s such a force for good that we need here in Los Angeles.”

Canoeing, horseback riding and archery are among the highlights of USC’s popular student-run summer camp. But outdoor adventures are just the start.

Grateful for support that made college possible, USC grad pays it forward

Troy Camp co-director Marla Ross found her confidence at USC through financial assistance and guidance from mentors and friends. As a recent grad, she wants to help others do the same.