If you’re worried about Alzheimer’s disease, your best shot at prevention could be maintaining cardiovascular health through exercise and diet and staying on top of conditions such as diabetes and high blood pressure.

That’s because USC researchers suspect healthy blood vessels are the key to brain health in old age. Their work shows that damaged capillaries in the brain — rather than plaques and tangles of abnormal proteins — may set the stage for Alzheimer’s decades before memory problems emerge.

This work — as well as the latest findings from dozens of other USC Alzheimer’s scientists — will be on display at the Alzheimer’s Association International Conference, which will be held July 14-18 at the Los Angeles Convention Center. Alzheimer’s is considered one of the greatest health challenges of the century, affecting an estimated 5.4 million Americans.

“The fact that we’re seeing the blood vessels leaking, independent of tau and independent of amyloid, when people have cognitive impairment on a mild level, suggests it could be a totally separate process or a very early process,” said Berislav Zlokovic, director of the Zilkha Neurogenetic Institute at the Keck School of Medicine of USC.

In healthy brains, the cells that form the walls of capillaries fit tightly together to form a barrier that keeps stray cells, pathogens, metals and other unhealthy substances from reaching brain tissue. Scientists call this the blood-brain barrier. In some aging brains, the seams between cells loosen, blood vessels become permeable and neurons begin to die.

“We’ve also learned that pericytes, a type of cell in the blood-brain barrier, not only help push blood through the brain but also secrete a substance that protects neurons,” Zlokovic said. 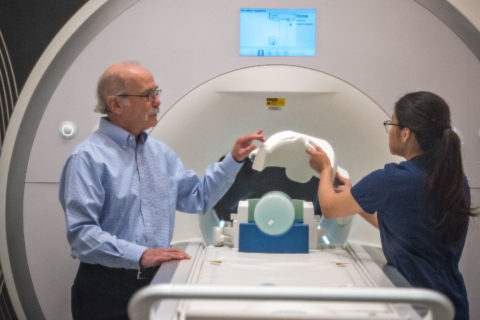 Zlokovic works closely with Arthur Toga, a world leader in mapping brain structure and functioning, who directs the USC Mary and Mark Stevens Neuroimaging and Informatics Institute at the Keck School of Medicine.

“Brain imaging is integral to studying Alzheimer’s disease. In visualizing the blood-brain barrier in people, we actually can see and measure changes where the barrier breaks down,” Toga said. “We’ve been able to correlate greater leakage with increased cognitive decline.”

In addition, brain imaging is allowing Toga to detect changes, potentially indicative of disease, in the spaces around blood vessels in the brain. Known as perivascular spaces, they help drain fluid and metabolic waste from the brain.

Other USC scientists are also working at the intersection of blood vessels and brain health, including Diana Younan, a senior research associate in the department of preventive medicine at the Keck School of Medicine. She studies the link between air pollution and dementia. The exact mechanism isn’t fully understood; for instance, does fine particle pollution penetrate the blood-brain barrier and infiltrate brain tissue? Is it a matter of pollution triggering inflammation?

In her recent research, Younan looked at this association and explored the protective effects of higher levels of education, physical activity and challenging work — all of which contribute to “cognitive reserve,” or resilience in the brain’s function. When she and her colleagues studied people exposed to fine particle pollution, they found that higher levels of cognitive reserve seemed to protect against dementia.

“Here in Los Angeles, you can’t really avoid air pollution,” Younan said. “So, if people are staying involved in mentally stimulating activities, it could decrease the risk of memory problems later on.”

Daniel Nation, an assistant professor of psychology at the USC Dornsife College of Letters, Arts and Sciences, found that patients with untreated diabetes developed signs of Alzheimer’s disease 1.6 times faster than people who did not have diabetes. One theory is that diabetes treatment may keep the brain’s blood vessels healthy, staving off dementia.

“It’s clear that the medicines for treating diabetes make a difference in the progression of dementia,” Nation said. “But it’s unclear how exactly those medications slow or prevent the onset of Alzheimer’s disease, so that is something we need to investigate.”

Certain cells secrete a substance that may head off Alzheimer’s, USC study finds

The cells — known as pericytes — preserve neurons in the brain, which can keep dementia and other cognitive disorders at bay.

Berislav Zlokovic receives new funding to explore the prevention of Alzheimer’s and dementia.

A gene variant responsible for vascular damage to the brain is a promising new target for drug therapy to fight Alzheimer’s disease and other neurodegenerative diseases, according to research published in Nature.

Berislav Zlokovic has been appointed director of the Zilkha Neurogenetic Institute at the Keck School of Medicine of USC.