Arye Abraham seems like a typical third-year law student. But how many guys in law school have more than 38,000 followers on Twitter, the phone numbers of dozens of NBA players, agents, and executives, and the potential inside scoop on where Kevin Durant and Kawhi Leonard will be playing basketball in 2019 and beyond?

“This was never the plan,” he said. But he’s certainly not complaining.

Abraham grew up in a USC family. His father graduated from the USC School of Architecture in 1988 with a master’s in architecture. The elder Abraham would take his son to USC basketball and football games, as well as to construction sites and tours of properties. It’s no surprise the young man grew up steeped in sports and real estate. 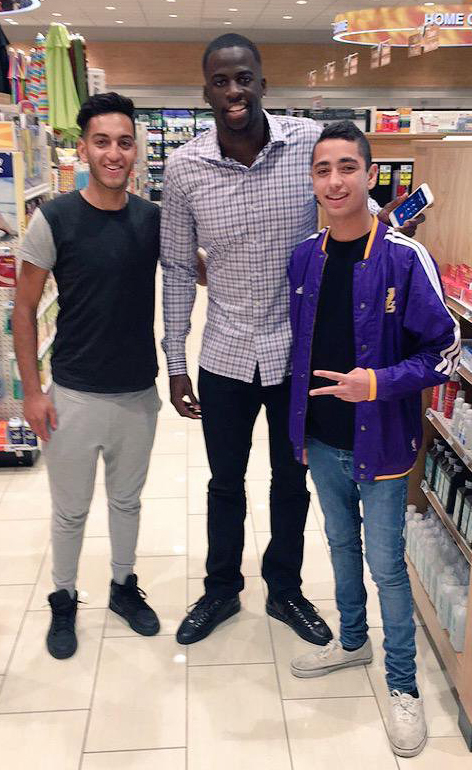 Abraham’s basketball savvy has him spotting players all over the city, including Golden State Warriors All-Star Draymond Green. (Photo/Courtesy of Arye Abraham)

He enrolled in USC Price’s real estate development program in 2015. But as he was learning about land, he also was developing another talent: the ability to comfortably speak with anyone.

Classes and networking events at USC dissipated any fear of talking to strangers. Not that he had much anyway. As a kid, he regularly ran into pro basketball players and wouldn’t hesitate to ask them questions. That’s where his media career started.

“I grew up in the Beverly Hills area, and there were basketball players everywhere I looked,” said Abraham, a big Los Angeles Lakers fan. “I’d see them in hotels or on the street and I’d ask questions about free agency or trades or where they’d be playing next year. And they’d happily give me hints, which I soaked up.”

Talking to his favorite players was a dream come true. But it wasn’t until he stumbled upon Twitter that he realized the full potential of these conversations.

“I created an account and started documenting what I learned and posting some pictures,” he said. At first, it was just for fun. Then he got a bit of viral fame as a 16-year-old for scooping the world on NBA player Dwight Howard’s free agency plans. All of a sudden, he became more than just a fan: He became a reporter.

“Twitter gives you a platform for this sort of thing,” he said. “You don’t need to be a journalist working for ESPN. You can cultivate relationships and grow organically.”

The ups and downs of passionate NBA fans

What was a social media hobby has become an unpaid part-time job. Yahoo Sports, Fox Sports and ESPN regularly cite Abraham’s reporting. He even counts several NBA players as friends.

“They’re not sources,” he noted. “I don’t use my friends as sources. But various other NBA people, though I don’t hear from them every day, will shoot me a text when there’s news to break, and I’m more than happy to break it.”

A source close to the situation has confirmed to me that D’Angelo Russell has reciprocal interest in the Lakers “if the money is right,” I’m told he loves Los Angeles and has no ill will towards LAL now that Magic Johnson is gone.

It’s not a drama-free existence, though. He consistently hears from NBA lovers on social media who don’t like his bulletins. Some more-traditional reporters also disregard people who take an alternative path into journalism, Abraham said. But he doesn’t mind. He understands his role in the basketball ecosystem. He is just an NBA addict who made some contacts and is happy to amplify his findings to ravenous fellow fans.

“I’m not trying to burn any bridges,” he said. “I love the sport, and I’m just sharing what I learn along the way.”

Next steps for Arye Abraham

Now that he’s become a burgeoning force in sports media, what’s next for Arye Abraham? He’s still sticking to the original plan, though his rising fame may prompt a tweak or two.

“The plan has always been USC Gould for law school, then a job at a big law firm,” he said. “Then, if I want to, parlay it into sports law or a job as an agent.” That used to be a “maybe someday” dream, but it’s become a genuine consideration.

For now, he’s spending the summer working at a firm and using his spare moments to check texts and keep his followers informed on the latest news.

“The beginning of July, when free agency really kicks into gear, is going to make balancing everything really tough,” he acknowledged. “But I’m going to multitask as best I can and get it all done.”

Of course, his beloved Lakers already got the jump on the rest of the league by acquiring superstar center Anthony Davis on June 15. Abraham’s initial reaction was exactly what you’d expect from someone with feet in two worlds.

“And I couldn’t wait to tell my thousands of followers.”

This story was updated on July 2.

Can USC researchers change the NBA through science?

Researchers at the USC Viterbi School of Engineering are sifting through a season’s worth of stats from NBA teams, looking for insights that may transform the game of basketball.

Trojans visit the Pacific Northwest, where they talk about the business behind sports.