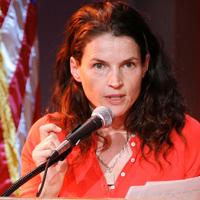 Ormond: “May the next generation say ‘let us be the one that is going to be proactive in creating peace.’ ”

United Nations Goodwill Ambassador and actress Julia Ormond recently challenged 800 high school and middle school students gathered at USC to use their influence to end the scourge of human slavery.

“There are more people enslaved today than at any other time in our history,” she told the audience. “The selling of children is the fastest-growing global crime.”

An estimated 27 million people around the world today live in conditions that qualify as slavery, she said.

The unfortunate victims include boys forced to dive into African lakes to untangle fishing nets, girls sold into prostitution in Asia and the Americas, and workers of all ages confined to harsh conditions in various agricultural and production operations around the globe.

“There is an intimate link between poverty and crime,” Ormond said. “Our morality is often stripped from us by poverty.”

During the two-day conference, the students took on roles as global diplomats, seeking to find solutions to a variety of economic and development topics � including eradication of illicit drug crops and other criminal activities.

Ormond challenged the diplomat/students to redouble their efforts to promote conditions that would help take away the rewards of human trafficking. “We’ve spent much of history going to war against one another,” she said. “May the next generation say ‘let us be the one that is going to be proactive in creating peace.’ ”

USC was a fitting location for the conference because the university has a long, distinguished history as a global crossroads, said Vice Provost for Globalization Adam Clayton Powell III.

“USC is the most global university in the United States � at the capital of the Pacific Rim, Los Angeles. There are more than 7,000 students from other countries studying here,” he told the crowd as he welcomed them to the campus.

Calling on the students to achieve great things in their lives, Powell noted that he had 40 years earlier participated in a Model United Nations program as a high school student in his native New York City.

That sentiment was underscored by United Nations General Secretary Ban Ki-moon, who sent a videotaped greeting to the students. The General Secretary said that he also had participated in a Model U.N. program � while growing up in the Republic of Korea.

Also in attendance at the event was Ambassador William Luers, president of the U.N. Association of the United States.

Funding for the event was made possible by Merrill Lynch, with additional support from the Annenberg Foundation, the Better World Fund, the Goldman Sachs Foundation, Microsoft Corp., the National Geographic Education Foundation, the New York Times Foundation, Paul Newman/Newman’s Own and the Ross Institute.

Ormond is known for her roles in such films as Legends of the Fall, Sabrina and The Barber of Siberia as well as for her work in television and the theatre.

In presenting the keynote address for the session, Ormond also represented the nonprofit group she founded, the Alliance to Stop Slavery and End Trafficking. For more information on the organization, visit http://assetcampaign.org/home

Social work students join with the Keck Human Rights Clinic to advocate on behalf of asylum seekers by providing free evaluations, educating medical students and helping them gain experience as advocates for health and human rights.

The need for human rights in this global pandemic

After seeing how harmful COVID-19 is to vulnerable populations worldwide, the USC Institute on Inequalities in Global Health has launched efforts with partners at the global level and in countries in Asia, Africa and Latin America.