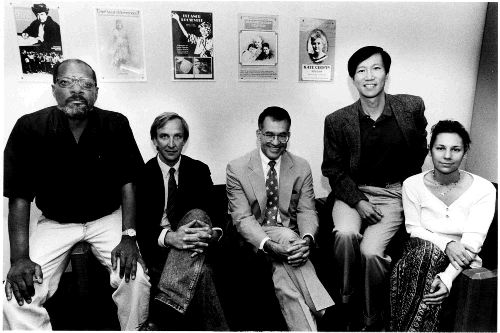 “I thought the American studies people would go crazy,” recalled Barbara J. Solomon, who sat on the committee that made the proposal. “They said ethnic studies was far too narrow to serve as an undergraduate major for American studies.” Yet, 18 months after reconfiguring American Studies to include African-American, Asian-American and Chicano/Latino studies, the university is profiting from the change. Possibilities loom large for new interdisciplinary research and, after a three-decade struggle, ethnic studies finally appears to be on sure footing. Indeed, the reconfiguration may even allow USC to lay claim to a truly unique approach to the discipline. “At this point, there’s a sense of optimism,” said Mauricio Mazón, a former chair of the history department, who has just been named to head the Program in American Studies and Ethnicity. Far from diluting American studies, as some critics feared, the approach has put USC at the forefront of the interdisciplinary field, according to a spokesman for an international organization of American studies faculty. “It is not the standard or the historical configuration,” John Stephens, the executive director of the American Studies Association, said of USC’s approach. “It represents the avant-garde, the cutting edge.” “We feel we’ve come up with a unique program that makes Southern California and the West its focus,” said Thomas Gustafson, Mazón’s predecessor at the program’s helm. From an administrative standpoint, the program exemplifies how to attain maximum results through a strategic and disciplined use of resources. “It’s hard to find a program that is more interdisciplinary or tries harder to analyze the unique contributions of our region,” said Morton O. Schapiro, the dean of the College of Letters, Arts and Sciences. “It fits very well with the initiatives outlined in the university’s Strategic Plan.”

In 1993, provost Lloyd Armstrong Jr. announced plans to establish an American Studies major. The following year, he announced plans to add the ethnic studies component. Resisting temptation to pander to politics or other pressures, the major’s architects said they set tough ground rules, and now they’re glad that they did. First, they decided to allow “scholarship to dictate the course” of the American studies major, Mazón recalled. Where the major had once focused primarily on the literary and historic contributions of Americans of European ancestry, they found most research now explored marginalized groups. “In the 1970s, ethnic studies was a political issue,” Mazón said. “Now it’s an academic issue – it’s where the research is going on in American studies.” Secondly, the architects insisted that American Studies faculty had to be prepared to serve two masters – American studies or ethnic studies, and also a separate discipline, such as English, history, sociology or psychology. “We don’t have any marginal people in this program,” Mazón said. “If anything, they have to be better because they have to pass muster in American studies and their home department.”

In plotting the major’s course, crafters repeatedly asked themselves, “‘Why American Studies at USC – as opposed to NYU, Columbia or any other?” recalled Solomon, vice provost for faculty affairs and minority affairs. The answer inevitably returned them to the university’s Strategic Plan, which calls for an emphasis on the region. The program is believed to be unique in its emphasis on ethnic groups in Southern California and the West. For instance, African-American studies at USC is entirely different than at most universities. “Most [African-American programs] focus on Harlem, Chicago and the South,” Solomon said. “There’s been little emphasis on Utah, Montana or California, but we’ll do that.” Finally, every step had to be part of an integrated plan that took each part of the major into account, the crafters recalled. For instance, the administration first went looking for faculty teaching Asian-American topics, “because we didn’t have anyone focusing on this,” Solomon said. Then came Latino and African-American specialists. The cycle will repeat itself, resulting in at least one more hire from each group. “What this does is help to avoid the kind of highly competitive battle for resources that frustrated earlier attempts at establishing ethnic studies at USC,” Solomon said.Thus, individual programs do not have to vie for resources. “We have been trying to establish ethnic studies for almost as long as I’ve been here, which is going on 30 years,” Solomon said. “I think we’ve had more success over the past year in developing a structure that seems to be viable.” Adding the ethnic studies component has improved the quality of education received by everyone who majors in American studies, the crafters believe. “This really updates the American studies major, which now is on the cutting edge of where this increasingly multicultural field has been heading,” Mazón said.u0000

A new approach to American studies