You could certainly call Bethany Chen a chemist. Or a robot programmer. She’s definitely a computer scientist. Don’t forget about hip-hop dancer, philosopher and black belt expert in hapkido.

A longtime science enthusiast, the rising sophomore at USC has interests that range across the map. And like many undergrads, she’s taking advantage of opportunities at USC to consider options for her future and gain experience in diverse fields.

“I’m kind of dipping my toe in everything,” said Chen, 19. She majors in computer science at the USC Viterbi School of Engineering, but she is also pondering a minor in philosophy and designing mobile phone apps. She also took a class on natural hazards and climate change. It’s all part of her plan to try new things and find a way forward in life that fits her interests, rather than stressing about settling on a career right away.

Her willingness to explore, experiment and discover herself is what academic counselors and many teachers encourage for undergraduates — and what studying at a university makes possible.

Openness is a healthy attitude for a young college student to have, said Trisha Tucker, an assistant professor of writing at USC. She sees a lot of high-achieving students as head of writing instruction in USC’s interdisciplinary honors program, Thematic Option, and faculty-in-residence at McCarthy Honors College.

Some of them worry about declaring the wrong major or pursuing a path that might lead to failure.

“One thing I’ve noticed about this generation of students is they feel positive pressure to follow their passion, to find a major and then a career that will make them feel passionate about their work,” Tucker said. “On the flip side, I’ve noticed an anxiety about being 18 and not knowing what their passion is.”

You don’t have to specialize right away, especially if you aren’t ready.

She encourages undergrads who seem overly concerned about their future to embrace Chen’s approach to college — by exploring interesting courses and trying new things through student clubs and other extracurricular programs.

“You don’t have to specialize right away, especially if you aren’t ready,” she said. “Life is a long journey. You have four years here, and it’s true the things you can do in that time are limited. But this is just the beginning.”

Chen agrees with that sentiment.

“Sometimes students lose sight of why we try so hard in school and feel like it’s the end of the world if we get an A-minus,” Chen said. “We try so hard because we want to be happy in the end. And that comfort comes from doing what you love every day.”

She spent her first semester getting used to the academic rigor of college. Then she started branching out into student organizations during spring. 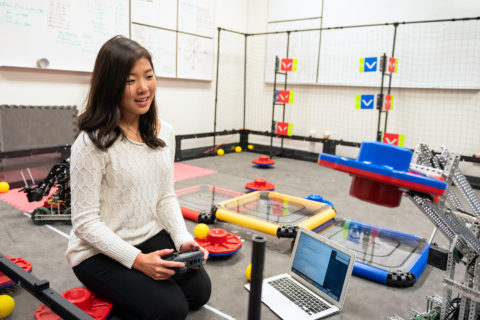 “Since coming to USC, the way I’ve viewed school has changed,” she said. “I find I’m 10 times happier trying out these different extracurriculars than just focusing on my classes.”

Surrounded by a clutter of electronic gadgetry and robot parts in Powell Hall one recent weekday afternoon, Chen knelt down to fiddle with a complicated tangle of machinery. She sat back and swiveled the joystick on a handheld control pad. Her eyes lit up as the apparatus came to life.

She was making final adjustments to Izzy, her nickname for a robot she programmed as part of the USC VEX Robotics Team, before an upcoming competition. “I’m a little obsessive when it comes to code,” Chen said. “I feel like when I code, every seven hours feels like one hour. I’m hoping that’s indicative that I’m on the right path.”

Chen spent her winter break learning the basics of web design like HTML. She’s enjoying the rigor of her classes in computer languages like Python and C++. And her dedication to coding Izzy paid off, helping the robotics club earn top honors at a worldwide competition.

For those who know Chen, it’s no surprise that she is excelling in a challenging scientific environment like USC. Benjamin Ku, who taught her in his advanced chemistry class at South Pasadena High School, said she seemed to have a natural ability to grasp difficult material. 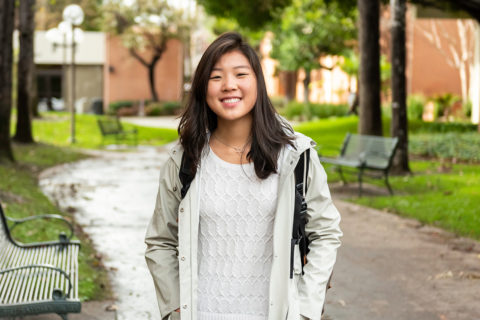 He recalled Chen dropping into his classroom before or after school to quiz him about some topic that had captured her attention. She often wanted to understand the nuances of a chemistry problem.

“She is so diligent, always asking questions and trying to figure out not just how to do the problems, but understanding why we do it that way,” Ku said.

An early start in research inspires focus on chemistry

That curiosity helped Chen publish her first scientific paper this spring in a biochemistry journal. The article described research she began contributing to as a 16-year-old summer intern through USC’s Bridge Undergraduate Science Jr. program, which pairs high school students with USC researchers to do hands-on experiments.

Chen worked alongside recent PhD graduate Tzu-Shyang “Kevin” Lin in the USC School of Pharmacy lab of Clay C.C. Wang. They manipulated the DNA of fungi, trying to create new substances that might have health benefits.

“She is bright and really driven,” he said. “I trust that when she has found her passion and applies herself, she will do great things.”

Asked about her vision for a future career, Chen admits she isn’t sure about it yet. She sees a potential way forward that would blend two of her interests: using her computer programming skills to conduct complex and accurate chemical analyses.

It’s an idea she put to use in the fungi lab, writing an algorithm in Java to speed up the process of determining whether the research team’s DNA manipulations had created any new compounds.

I’m doing all this knowing that in the end, I’ll find something that makes me happy.

“I just really love how computer science adds a certain degree of control that raw chemistry — or any raw science — doesn’t have on its own,” she said.

But her experiences with the robotics team have convinced her she could enjoy a job in that field. And she likes working with other students, so Chen also could imagine pursuing a PhD and then teaching at a university.

Whatever the future holds, she’s not too worried about figuring it out immediately. She’s too busy exploring her passions.

“Even though there’s a whole lot of pain when it’s the night before the robotics competition and there’s also an exam the next day, it’s fine,” she said. “Because I’m doing all this knowing that in the end, I’ll find something that makes me happy.”

Researchers develop algorithm through which robot learns to walk

Kids get up close and personal with robots

Science enthusiast finds many outlets for her passions at USC