Murray Gell-Mann, USC Presidential Professor of Physics and Medicine and Nobel laureate, died on May 24 at his home in Santa Fe, N.M. He was 89.

Gell-Mann received the 1969 Nobel Prize in Physics for his work on the theory of elementary particles. 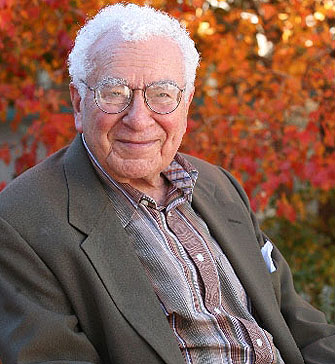 Among his groundbreaking contributions was a way to classify subatomic particles — like neutrons and protons — much like chemistry’s periodic table of the elements. He developed the method, which he dubbed the “Eightfold Way,” during the early 1960s. It was a time when scientists were discovering exotic new particles by flinging electrons and protons at targets using “atom smashers” — also known as particle accelerators.

Gell-Mann’s Eightfold Way led physicists to predict the existence of elementary particles that Gell-Mann dubbed quarks (he borrowed the name from the James Joyce novel Finnegan’s Wake). Later verified through particle accelerator experiments, quarks are the building blocks of neutrons and protons. Gell-Mann would continue to refine quark theory in the following years, providing deeper insights into the universe’s most basic structures.

Gell-Mann was appointed in September 2010 as a USC Presidential Professor, a rare honor bestowed upon a figure who combines the highest academic recognition with landmark contributions to society. He was affiliated with the USC Dornsife College of Letters, Arts and Sciences and the Keck School of Medicine of USC.

At USC, he collaborated with David Agus, USC professor of medicine and biomedical engineering. On Twitter, Agus mourned Gell-Mann’s loss and described him as a “legend.”

The world lost a legend. My mentor, scientific collaborator and friend passed away today, Murray Gell-Mann. Arguably the greatest living physicist, used his knowledge to target cancer these past few years. Was a privilege to work by his side. pic.twitter.com/4zIc9zxFN4

“Arguably the greatest living physicist, [he] used his knowledge to target cancer these past few year,” said Agus, director of the Lawrence J. Ellison Institute for Transformative Medicine of USC and director of the USC Center for Applied Molecular Medicine. The pair worked to develop a better understanding of the complexities of human disease.

Born in New York’s Lower Manhattan in 1929, Gell-Mann was valedictorian of his high school before entering Yale University at age 15. He graduated from Yale with a degree in physics in 1948. He earned his doctorate in physics at the Massachusetts Institute of Technology in 1951.

Gell-Mann was director of the MacArthur Foundation from 1979 to 2002 and also served on the President’s Committee of Advisors on Science and Technology from 1994 to 2001. Most recently, he was a Distinguished Fellow and co-founder at the Santa Fe Institute, where he headed the Evolution of Human Languages program. He held faculty appointments at Caltech and the University of New Mexico.

Murray Gell-Mann, a renowned physicist and Nobel laureate, has been appointed Presidential Professor of Physics and Medicine.

It began with an off-the-cuff remark. When enrolling at Technion, the Israel Institute of Technology in Haifa, Arieh Warshel asked his friend Eliezer Finkman what he should study.