Dozens of USC medical students lined up, each holding a piece of paper containing a short eulogy.

They were anonymous — no names attached. But the students already knew them in a way. They knew their bodies, having spent a year dissecting them, learning how their brain and heart works or investigating their arteries. 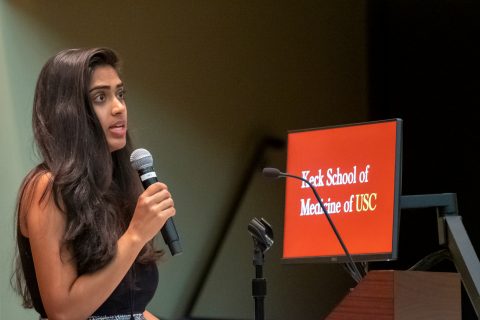 Speaking into the microphone, they shared the submitted stories of moms and dads, siblings and spouses — a brilliant neurosurgeon, a generous special education teacher or a free-spirited world traveler.

For Elliott Orloff, a first-year medical student, it was moving to hear about the people who donate their bodies to USC’s Anatomical Gift Program.

“It’s always something we wonder when we’re dissecting the bodies: who are they, what’d they do for a job, how did they die?” he said. “Even though it’s anonymous, it is nice to get a personality attached.”

It’s hard not to think about the person they spent the year with, in whom they uncovered a hysterectomy or a congenital heart defect. They were the future doctors’ portal to understanding the human body and, in turn, knowing how to treat it.

The ceremony — started in 2004 by Professor Mikel Snow, head of the anatomy department — honors the selfless act many make to teach the next generation of physicians. It started with students and faculty. Over the last several years, the school has also invited the families of donors to the ceremony. On a recent Wednesday, about 40 were present among the roughly 200 medical students and faculty inside an auditorium on USC’s Health Sciences Campus.

These are people who made this donation so these students could learn.

“It feels like the right thing to do,” Snow said. “These are people who made this donation so these students could learn. The students recognize that not all students being trained in medicine throughout the world … have these donor programs and rarely get to work on human bodies.”

Body donors are uncommon, but the need remains

While organ donation is relatively mainstream — there are 145 million registered organ donors in the U.S. — donating your body to science is less common. It’s estimated that about 20,000 Americans donate their body each year. Due to USC’s location in a major metropolitan city, it gets about 100 donations a year, Snow said. Other programs throughout the state, like the University of California’s, receive nearly 1,000 a year.

But in smaller regions with smaller populations, medical schools struggle to get enough donors, Snow said. For example, roughly a decade ago, Colorado and Wyoming fell a couple dozen short of the requested cadavers for medical school training. Canada has also cut back its use of donors. More and more schools are trying out digital dissections, including with VR. Microsoft is designing realistic interactive holograms of the human body. 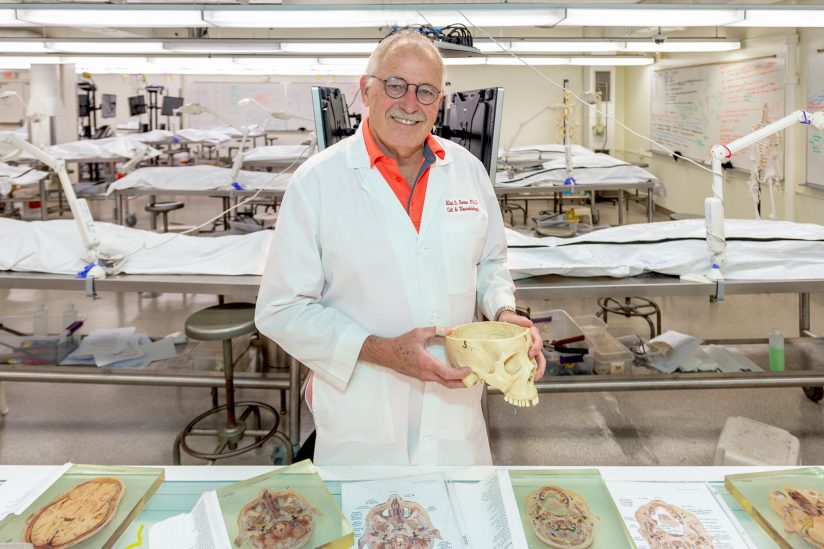 It’s also a function of expanding medical school curriculums, which are cutting back basic science courses like anatomy despite the fact that more than 80 percent of medical students say gross anatomy prepares them to scrub in.

With medical school enrollment up 7 percent since 2014, the demand for cadavers and anatomy training will only go up.

For first-year medical students, the year-long anatomy course is their only hands-on experience prior to their clinical rotations during their third year — when they typically work in USC-affiliated hospitals.

“It’s our first time getting the opportunity to look into the real body of a real person outside of a textbook,” Orloff said.

For first-year Laura Sprunt, there’s no replacement for dissecting a real person.

“You prepare for each lab with slides and photographs, but it doesn’t really prepare you for what it actually is in real life,” Sprunt said, who was at the ceremony. “We all learned what a nerve is but when you see one for the first time, it isn’t at all what you thought it was — in scope, in texture, in size. To feel what was formerly just a picture was hugely beneficial to me.”

How anatomy courses make use of donated bodies

First-year medical students and anatomy MS students take anatomy for a year and are assigned a team and a body at the start. They’ll stick with that donor the whole time while studying the others as well in preparation for their exams. During finals, they’re tested on all 32 donors, with different questions on each. 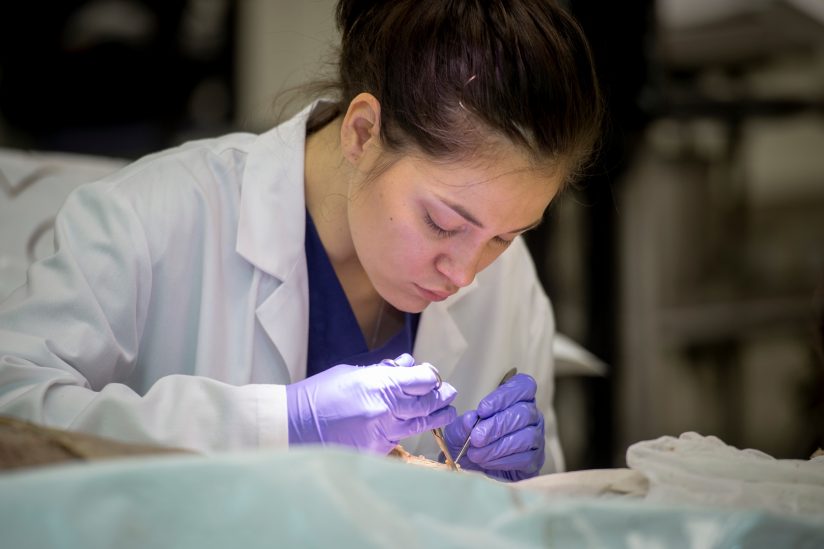 Donors typically run in age from 70 to 100 and are only used for that year. USC dentistry and physical therapy students study them as well. USC cremates the remains and they can be returned to the families afterward.

Snow, a beloved professor who has numerous teaching awards, is sensitive to the nature of the course. Although these students are training to be doctors, many have never seen a cadaver. When he assigns a body, he offers a one-on-one viewing outside of the class. He remembers a year that a student became upset, learning later she was sensitive having recently lost a family member.

“In a class of almost 200, there’s going to be some that are concerned,” he said. “I remember what it was like for me to see a corpse at the University of Michigan. I was the last one into the lab. I didn’t get a chance to mentally prepare for that.”

Traditionally, anatomy professors will identify organs as they dissect. But Snow provides context.

“Sometimes anatomy can get boring if you’re just doing the dissection and identifying,” said MS graduate Pilard Hanna. “Instead of just telling [students] ‘this is the heart and this is the artery,’ he’ll add, ‘If this artery gets blocked, people have a heart attack.’ I learned so much about medicine in general, different surgeries and diseases, through Dr. Snow’s teaching.”

Over the course of hundreds of dissections, he’s seen a lot — such as finding a body that was “situs inversus,” which means all the organs in the body were oriented the mirror opposite.

“All of our organs inside our body either have a left or right orientation to them,” said Snow. “Stomach on the left, liver on the right … in these individuals, something goes wrong in development. It’s believed to be one protein that causes a complete reversal of every organ in the body.”

It was so rare he couldn’t even find statistics on it.

On top of that, sometimes students discover the body’s reported cause of death was inaccurate.

Variability is one thing students can’t get from digital models, he said. And it makes sense, because there is no prototypical human body. Everyone is unique.

If you understand there’s variation among individuals, you can better critically think when you’re in a situation.

“What if you’re not presented normal anatomy?” said MS graduate Will Byrd. “If you understand there’s variation among individuals, you can better critically think when you’re in a situation.”

Snow, who has taught anatomy for 48 years, knows anatomy training is contingent on teachers like himself. It’s become harder and harder for universities to recruit physicians to teach anatomy, mostly because the gap is widening between the cost of medical school and the pay disparity between a faculty job and a clinical career, he said. That’s why he spearheaded a Master of Science in anatomy, one of the only programs like it in the country, which had its first cohort graduate this month. The one-year program had 13 students, half wanting to teach anatomy, the others planning to continue on to medical school. 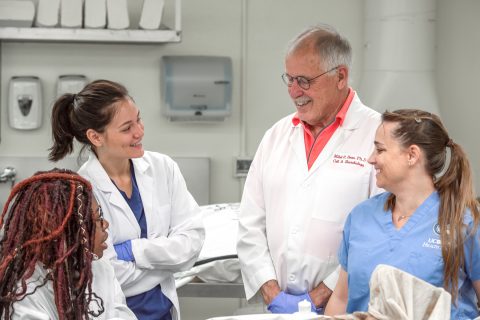 Vice Dean of Medical Education Donna Elliott, who is also a pediatrician, says understanding anatomy is more important than ever. Elliott is also a past student of Snow’s.

“You can’t do physical exams if you don’t know underlying anatomy,” she said.

And technology has reinforced that with ultrasounds and imaging techniques requiring more medical professionals taking a look into the body.

“It’s a vehicle for communication among physicians,” she said. “If you think about radiologists, surgeons, anesthesiologists — you can’t communicate with your colleagues if you can’t speak the language of anatomy.”

At the end of each year, medical students and now the MS students say goodbye to their donors. It’s that time of year that inspired Snow to create the ceremony. He remembers an early student asking if it would be OK to put a rose on her donor. Others asked if they could write letters to the next of kin, thanking them.

After the ceremony, there was a reception where families and students mingled.

Kyle Harmon, 20, was there for his grandfather, who was an engineer who launched astronauts to the moon. Later, he was a science teacher in the South Bay.

Remembering him, he felt pride; his contribution to science didn’t stop with his death. Now, he’s preparing physicians for careers where they might go on to treat thousands of patients.

“This is exactly what he would’ve wanted,” Harmon said.

Year after return, Snow takes helm of Dept. of Cell and Neurobiology

‘Ah-ha’ moments don’t get bigger than this

The fine art of human anatomy

Wearing a lab coat and grasping a scalpel, 17-year-old Jennifer Kim took a deep breath and began her first dissection of a human leg.