A typical day for a physical therapist might include assessing injuries, developing treatment plans and helping patients regain mobility. But if you’ve gone into tactical physical therapy, you might also accompany a narcotics team as they conduct a bust, witness a fugitive being removed from a house or try on 75 pounds of bomb gear.

These are all scenarios USC alumna Sarah Greytak has experienced at her job with the Denver police and sheriff’s departments.

“A tactical physical therapist deals with tactical athletes, which are those who put themselves in harm’s way to assist others in the course of their job,” she said. “That includes military, paramilitary, firefighters, police officers, sheriffs and corrections officers.”

Greytak credits her “think-outside-the-box” training at USC with preparing her for her current role.

USC taught me to be able to determine what I need to fix, try to fix it and then retest it.

“We don’t ever see the same problem twice, so that’s been big,” she said. “Your entire third year of physical therapy school at USC was learning to think for yourself and not follow a prescription set by somebody else. USC taught me to be able to determine what I need to fix, try to fix it and then retest it.”

Before taking the position with the police and sheriff’s departments in 2008, Greytak worked in traditional outpatient orthopedics. Four years ago, she moved to Colorado and met Casey Stoneberger, who was instrumental in getting the Denver Fire Department’s physical therapy program off the ground. As a result of the program’s success, the city wanted to expand services to law enforcement officers.

“The opportunity came up, and it was a perfect fit, so I made the jump,” she said. “I’ll never go back.” 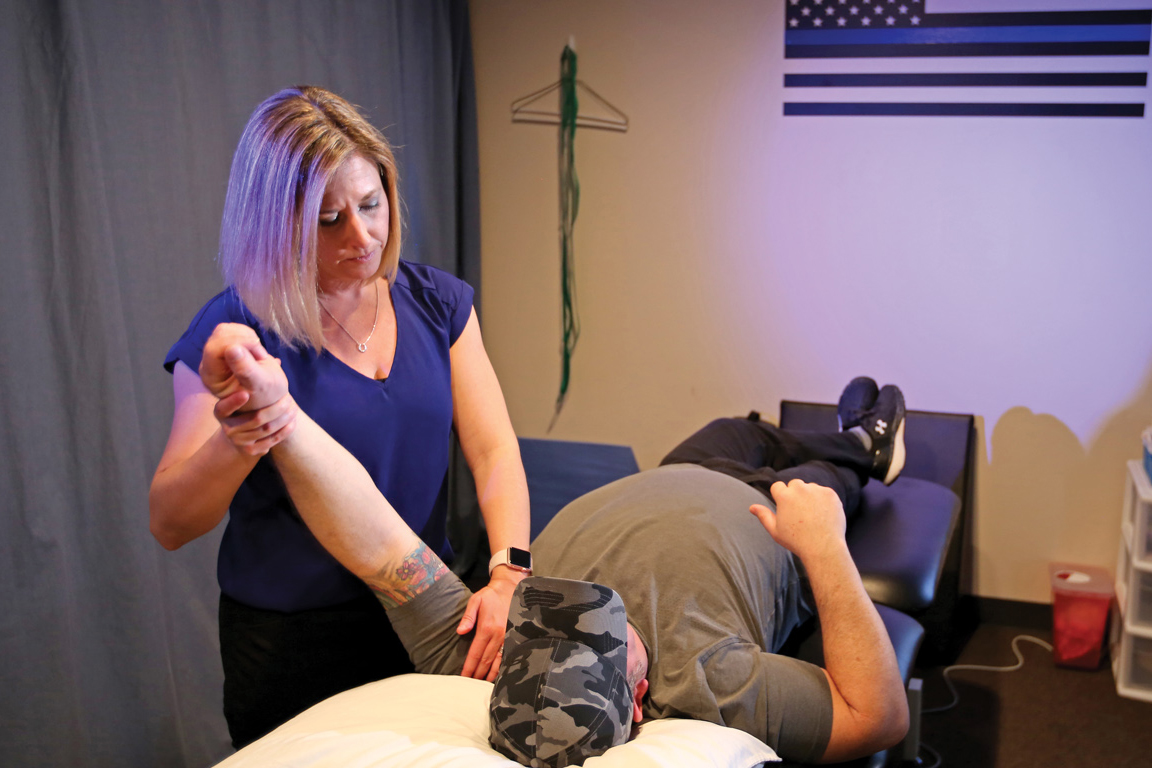 In addition to doing regular therapy sessions, Sarah Greytak and her team will even observe patients in the field to better understand the physical and mental demands of law enforcement jobs. (Photo/Brian Weister)

Treatment of tactical athletes as opposed to standard patients is different because of the former’s job demands. And it’s not all physical. While police officers are expected to be in top-notch physical form, there’s also a demanding mental aspect to the job.

“There’s a culture to the police department,” Greytak explained. “We understand the struggles they’re going through.”

That’s why the team of five physical therapists goes out into the community with officers at least once a month to witness the physical demands of the job, firsthand.

“We get to actually see what they do on a daily basis,” she said. “See what their functional movement patterns are. And then, we get to try to fix those.”

“Sarah was a critical piece in my physical recovery, but she was also instrumental in my mental and emotional healing,” said Sgt. Bobby Waidler of the Denver Police Department, who had two herniated discs in his back from the weight of his duty belt. “She became part of my support system as a caregiver, body worker, counselor, confidant, educator, personal trainer and fitness mentor, health advocate and trusted friend.

“Sarah speaks our same language,” he added, “and her message reaches us and lands because she has immersed and integrated herself in our culture. Officers are willing to be vulnerable and open up with people they trust. They trust Sarah.”

Injuries abound in the line of duty

For Greytak, watching police officers in the line of duty has been eye opening. Half of an average patrol officer’s job is spent sitting in a patrol car. But at a moment’s notice, he or she needs to be able to get up, make quick decisive actions under stress, run, jump, climb fences, run stairs, chase people down and sometimes fight with individuals. This is all done without a warm-up and while wearing a duty belt that can weigh between 16 and 33 pounds.

The most common injuries the physical therapy team sees are to shoulders, which occur while apprehending suspects and from slips and falls during chases. They also treat a number of chronic back pain cases as a result of heavy-duty belts and sitting in cars for prolonged periods of time.

“We do typical treatments such as manual therapy, mobilization, instrument- assisted soft tissue immobilization, cupping and dry needling,” Greytak said. “But on top of that, we do sandbag training, Olympic lifts, boxing and Krav Maga — and we use a virtual-reality shooting range. We can simulate various scenarios that officers are going to go through: weapon reloading and unloading. If you just had shoulder surgery, you’re kind of nervous about that, so we take them into this virtual-reality world where we can then go through training with them to make sure they’re prepared.”

Eighty percent of a typical day for Greytak is dedicated to treating individuals, much like an average outpatient orthopedic clinic. The remaining time is spent dealing with walk-ins and performing outreach within the community of officers. The city of Denver employs 1,400 officers between the police and sheriff departments, but the physical therapy team also works with civilians in the department and the new recruiting class. In total, there are approximately 1,800 to 2,000 employees. In an average month, the Denver police and sheriff physical therapy clinic logs around 220 visits.

“The officers love it,” Greytak said. “They trust us and know we have their best interest at heart. They want more. We’re booked. And they want to be there. They’re dedicated to getting better.”

“A program like this,” she added, “is important because being able to understand the specificity of each person’s job is huge. I think that’s where the field of physical therapy is going, whether you work as a factory worker on a line, at a computer or if you’re an officer in harm’s way every day.”

Greytak hopes physical therapy services like those offered in Denver will spread to other cities. There has been a huge positive response so far, not only on the cost-saving side but in terms of officer satisfaction.

It’s my opportunity to serve those who serve our community.

Anyone interested in tactical physical therapy should possess a heart of service. You may have to work off-hours or squeeze in people on your lunch. But Greytak wouldn’t have it any other way.

“It’s my opportunity to serve those who serve our community,” she said. “I get to give something back to them. I’m not out on the streets protecting people, but I’m helping to protect those protectors. I take care of the people who go out every day in harm’s way, for me and for my fellow citizens.”

Partnership with a leading historically black college is part of a government-backed initiative that aims to increase the number of graduate students from traditionally underrepresented populations.

Leukemia and a rare side effect of chemotherapy didn’t stop Brandon Hsu. Instead, they inspired him.

Through tactical physical therapy, USC alum treats those who serve