During their first year in the USC Jimmy Iovine and Andre Young Academy, students study various disciplines — from design and venture management to entrepreneurship and audio engineering — to figure out their niche.

“This person might be the design guy or the engineering guy or the coding person. I was none of those people,” said Amri Rigby, 22.

But then he took a motion graphics class.

“Once I took this animation class, it’s as if I saw a page from a book in my head with the word ‘storytelling’ highlighted,” he said, figuring out he loved filmmaking. “Like, boom, that’s what I’m passionate about.” 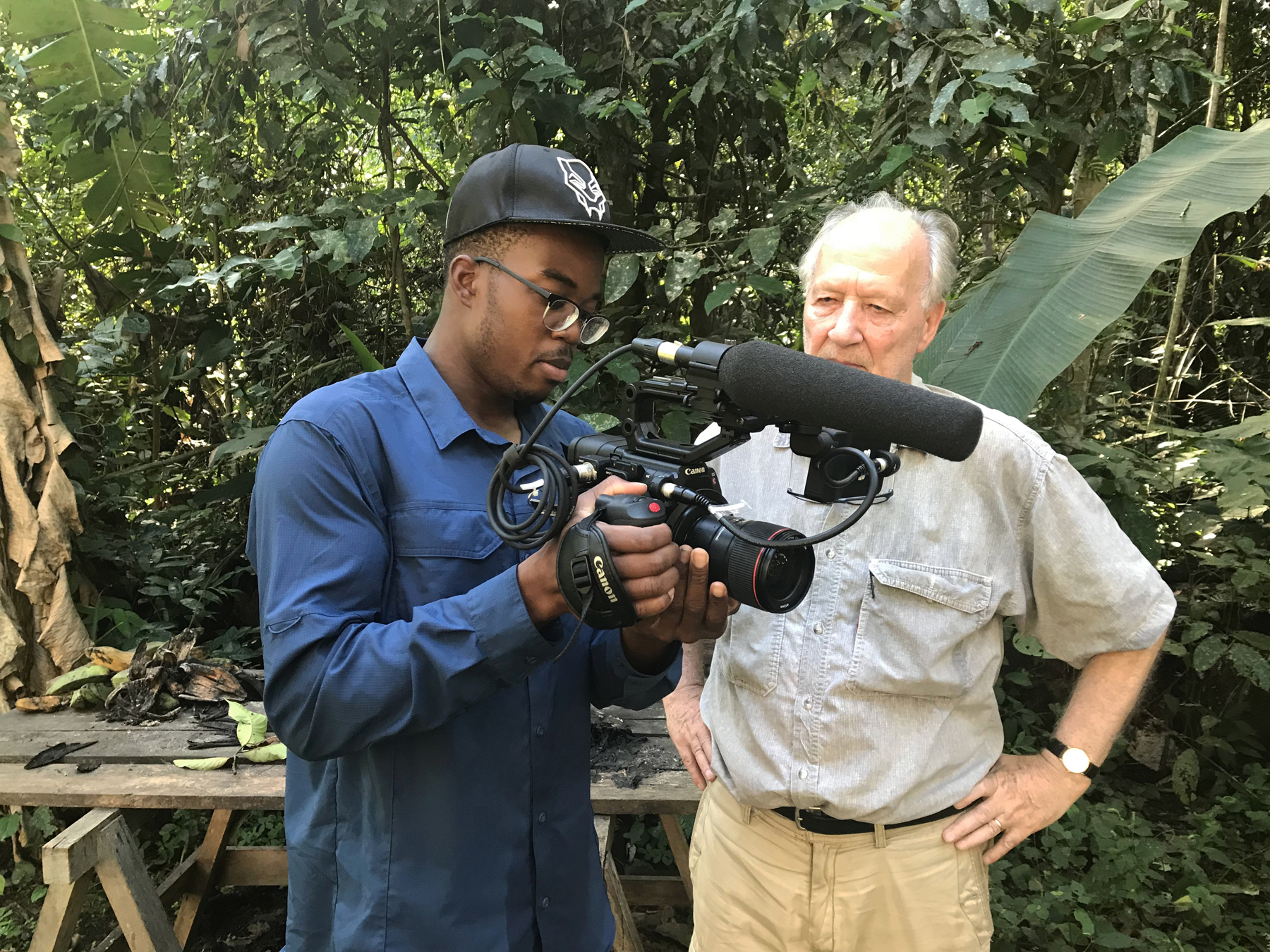 Rigby worked with Werner Herzog on a documentary in Peru. (Photo/Courtesy of Amri Rigby)

Rigby, who was part of the school’s first cohort and graduated this month with his bachelor’s in Arts, Technology and the Business of Innovation, has taken his interest pretty far in his five years on campus. His short film, Safe Haven, earned him a 2018 Sundance Ignite Fellowship. And he missed last year’s commencement, alongside his cohort, because he was in Peru shooting a documentary under the mentorship of Oscar-nominated director Werner Herzog. He ended up postponing graduating, staying a fifth year thanks to his Gates Millennium Scholarship. This summer, he’s heading to Uganda as a Fulbright scholar.

Although his taste for cinema started with animation, he knew sitting in an edit bay wasn’t his idea of a great time.

“I’m not the most technical person, but I do love people and film is the language of people,” he said. “Let’s cross out animation and pick film.”

Rigby, whose passion lies in directing, first cut his teeth on making movies just snooping around the USC School of Cinematic Arts.

“I was walking around on campus and I saw one of their sound stages was open … I asked, ‘Hey, can I volunteer for ya’ll?” he said.

For the following year or so, he worked on graduate student projects — learning from them in the process. He did whatever was needed.

“That could be script supervising or assistant directing or camera department,” he said. 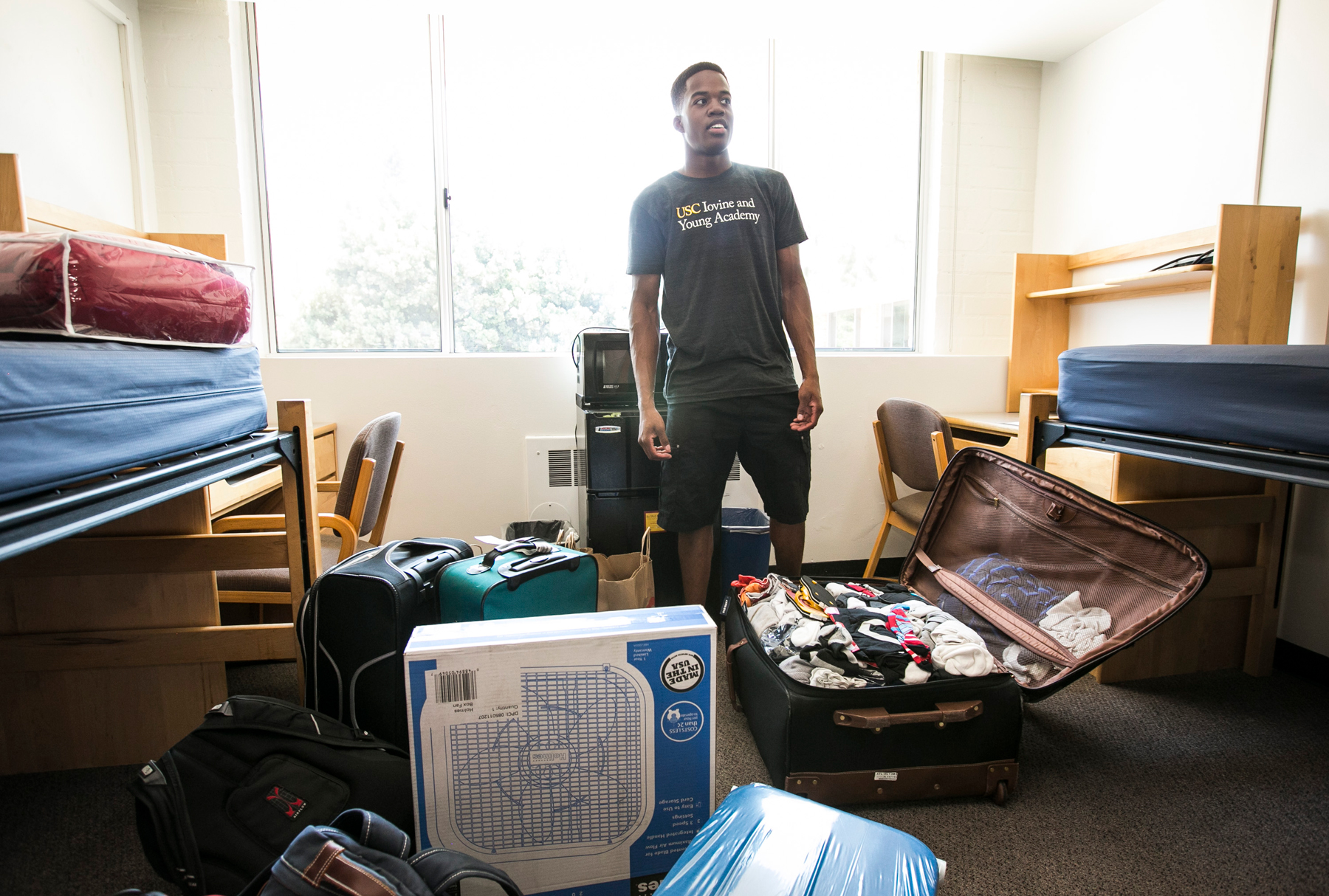 Amri Rigby has come a long way since moving into his first dorm at USC. (USC Photo/David Sprague)

During his sophomore year, a friend of a friend shared her story of miscarrying a child. He asked questions about her life and learned a lot about her relationship with her mother and how it impacted her.

“At the end of this conversation I asked, ‘Hey, can I make a film about this’?” he said, moved by her story.

Safe Haven, which he finished his junior year, was a fictionalized short film inspired by her. It follows the protagonist Amelia Palomino, a depressed high schooler dead set on becoming the first in her family to go to college. All of this is shaded by a conflict with her mother. Dialogue is in both Spanish and English and required Rigby researching the dynamics of Mexican American families. He raised over $10,000 to make the film, including paying the crew and post-production. Insecure creator and actor Issa Rae shared the 10-minute short on her YouTube channel.

On Thanksgiving, he found out he won the Sundance Ignite Fellowship for Safe Haven. He was one of 15 chosen from over 800 applications, earning him a Sundance alum mentor and free admission to the festival.

USC grad wants to tell the stories of ordinary people

When he returned from Sundance, he got word about another project.

“Basically Werner [Herzog] picked 48 filmmakers from around the world to make short films in the Peruvian jungle in one week,” he said. “It’s easily the hardest film experience I’ve ever had in my life.”

He would wake up at 5 a.m. daily and traveled everywhere by boat. Rigby was tasked with making a documentary, which meant finding a subject. Since he didn’t speak Spanish, he had to rely on translators, whose proficiency in English ran the gamut. He also was using new Canon equipment that he never used before.

But it came together. He found a woman who was using poetry to keep the language of her indigenous culture alive.

I think that we cheat ourselves by only telling the stories of people who are successful or famous.

“What are the gritty, true-to-life stories that I can tell?” he said. “Everyone has a story, a powerful story, and I think that we cheat ourselves by only telling the stories of people who are successful or famous. Ordinary people have stories that rock those, in my opinion.”

It’s what led him to the story he’s pursuing this summer in Africa for his Fulbright. He can’t share much about about it except to say it’s about a Ugandan woman he met through a mentor. He’ll be in Uganda for nine months developing the film. Then he’ll come back to figure out financing and distribution.

Although filmmaking has been his focus, he never considered leaving the USC Iovine and Young Academy for the School of Cinematic Arts. Truly, he wonders if he’d be where he is without the mindset it gave him.

“My freedom in the academy was getting my creativity activated in a way I didn’t know I could,” he said. “The biggest thing the academy gave me is looking at film in an entrepreneurial way. Yes, I’m an artist but art is a business.”