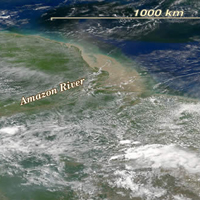 Organisms called diazotrophs pull nitrogen and carbon from the air.

Nutrients from the Amazon River spread well beyond the continental shelf and drive carbon capture in the deep ocean, according to the authors of a multi-year study.

The finding does not change estimates of the oceans’ total carbon uptake, but it reveals the surprisingly large role of tropical oceans and major rivers.

The tropical North Atlantic had been considered a net emitter of carbon from the respiration of ocean life. A 2007 study estimated that ocean’s contribution to the atmosphere at 30 million tons of carbon annually.

The new study finds that almost all the respiration is offset by organisms called diazotrophs, which pull nitrogen and carbon from the air and use them to make organic solids that sink to the ocean floor.

Diazotrophs “fix” nitrogen from the air, enabling them to thrive in nutrient-poor waters. They also require small amounts of phosphorus and iron, which the Amazon River delivers far offshore.

That is all the diazotrophs need to pull carbon from the air and sink it in the ocean.

The other great tropical rivers of the world also may contribute to carbon capture, said senior author Doug Capone, USC College professor in the USC Wrigley Institute for Environmental Studies, who added that studies on such rivers are in progress.

The study’s results present new options for the controversial practice of iron fertilization. Some biologists believe that seeding the oceans with iron could increase production of carbon-fixing organisms and help mitigate climate change.

Upwelling circulation in cooler waters makes them unlikely candidates for long-term carbon capture, said Capone, who explained that a permanent carbon sink instead may be more feasible in the warm oceans.

Capone said that iron fertilization would increase diazotroph activity and that the stratified tropical waters should be able to keep captured carbon solids from returning to the surface in the short term.

“The most appropriate places are probably not the high latitudes but rather the low-latitude areas where nitrogen fixation is a predominant process,” Capone said.

But Capone also noted the risks of iron fertilization, including increased production of other greenhouse gases and unpredictable effects on the food web.

Nevertheless, he said, “if we choose as a human society to fertilize areas of the oceans, these are the places that probably would get a lot more bang for the buck in terms of iron fertilization than we would at high latitudes.”

The National Science Foundation’s Biocomplexity in the Environment program provided most of the project’s funding.