As USC gets ready for its 136th commencement, graduating USC students aren’t the only ones who will look their best for the ceremony. So will Tommy Trojan, thanks to efforts to preserve and protect the campus icon. 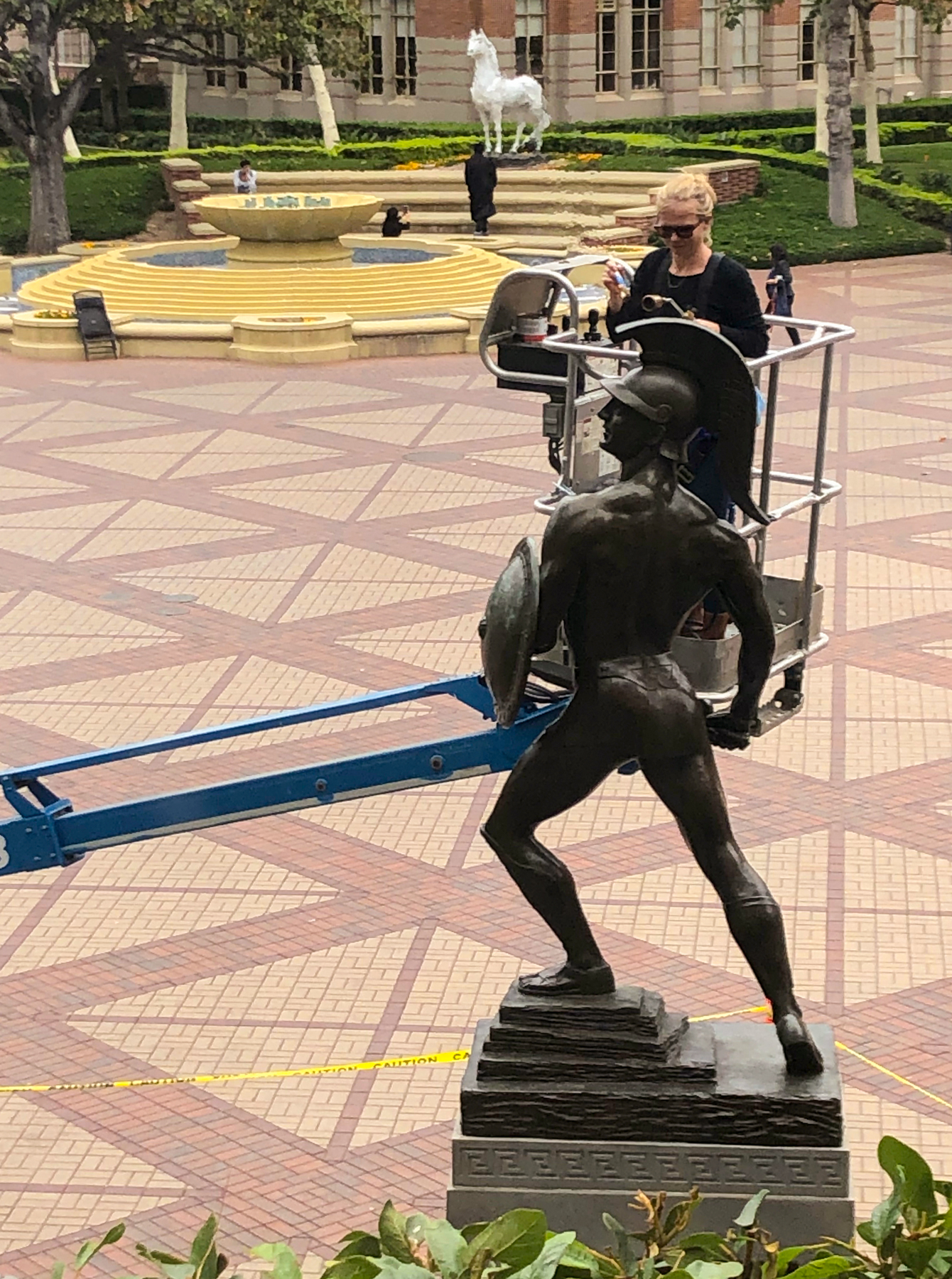 Waxing, polishing and even firing up flames from a blowtorch are all part of Tommy Trojan’s annual care. (Photo/Beth Shuster)

Tommy (also called the Trojan Shrine) stands as a backdrop for countless photos during commencement season, and it’s part of USC lore. So it makes sense that it’s one of the pieces of campus art that get special attention every year, a ritual especially important before graduation. That attention includes waxing, polishing and even firing up flames from a blowtorch.

A conservation team recently traveled to the University Park Campus to clean the Trojan Shrine in front of Bovard Administration Building and the Youth Triumphant fountain in the center of Alumni Park. Cleaning these historic art pieces requires inside knowledge about how to treat materials like bronze and stone. It turns out that metal isn’t necessarily as tough as you might think, and using the wrong cleaning chemicals could cause damage.

“Preservation of university assets is one of the Facilities Management Services strategic goals. The maintenance of USC’s iconic buildings, fountains and monuments is a priority for us throughout the year,” said George Huber, Facilities Management Services (FMS) maintenance manager. “Besides the regular cleaning and waxing of the Trojan Shrine, FMS covers Tommy and other campus statues during Rivalry Week and performs other routine maintenance periodically.

The Trojan Shrine is nearly 90 years old, and we want to properly protect it for years to come.

“The Trojan Shrine is nearly 90 years old, and we want to properly protect it for years to come,” he added. “It’s also important for our students and their families to commemorate their hard work at USC, so we want to make sure our campuses look great for them on commencement day.”

How USC statues and landmarks are cared for

In late April and early May, workers from Pacific Coast Conservation put Tommy through some preventive care. They removed layers of old wax and dirt from the bronze statue’s surface and applied new wax.

As fascinated onlookers watched and took photos for Instagram, the workers heated the wax with a blowtorch and carefully buffed Tommy to a shine. Workers also cleaned the bronze university seal beneath Tommy and washed the statue’s base. The goal is a protective finish on the metal that resists damage from rain — or even splashes of soda or other flying fluids, explained Alison Leard, director and owner of Pacific Coast Conservation.

The small company has visited USC several times a year for about a decade to care for pieces including the Trojan Shrine, Youth Triumphant, Tirebiter and a bust of former President Norman Topping.

An undergraduate art major, Leard earned her graduate degree in collections management and worked in preservation before starting her own company, based in Denver and Los Angeles. She is impressed with USC’s commitment to works of art and landmarks that are central to its traditions. Said Leard: “It’s great to see the university care and do this the right way.”

Do You Recognize These USC Statues?

Tommy Trojan, Then and Now

Students from the 1940s and 2010s meet at the same spot: USC’s iconic Trojan Shrine.