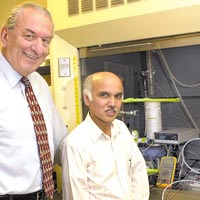 Don’t waste your breath � it may be the fuel of the future.

At least that’s the scenario examined by a group of scientists at a workshop co-sponsored by the National Science Foundation and the USC College’s Loker Hydrocarbon Research Institute.

“We all have to agree: We’re burning a lot of fossil fuels and making a lot of CO2,” said Luis Echegoyen, director of the NSF’s chemistry division. “We’re going to have to do something about it � and that’s why we’re here.”

For two days, more than 50 researchers from academia, industry and national laboratories put their heads together to explore how carbon recycling � using CO2 as a building block for fuel, plastics and more � could help reverse global warming.

As CO2 in the atmosphere grows to worrying levels, some scientists and entrepreneurs have been exploring how to capture carbon dioxide and pump it into the deep sea or elsewhere.

But this isn’t the only way of thinking about the greenhouse gas, said USC chemist G. K. Surya Prakash, one of the workshop’s organizers.

“People tend to think of CO2 as a problem rather than a resource,” he explained. “We want to take CO2, and instead of burying it underground, use it as a raw material, and convert it with alternative energy sources back to fuels and feedstocks.”

Such an approach would kill two birds with one stone, he added, since it could place a dent in global warming while offering a substitute for fossil fuels.

“We need to do this because eventually Earth will run out of fossil fuels, and we need to make carbon-based fuels and materials,” he explained. “Without that, our civilization cannot survive.”

Of the dozens of scientific workshops on CO2 held in recent years, only several have focused on carbon recycling rather than sequestration, Prakash noted.

Nobel Laureate and USC chemist George A. Olah and other scientists discussed methods for capturing carbon dioxide from point sources and even air as well as methods for converting it into fuels such as dimethyl ether, a diesel substitute, and methanol.

In the short term, carbon capture would have to occur where the gas is already concentrated, as in coal-burning power plants, cement plants, geothermal wells or fermentation facilities.

One company is already pursuing this. Speaking at the workshop, Oddur Ingolfsson, the CTO of Carbon Recycling International, presented his company’s CO2 conversion system being built at a geothermal power plant in Iceland.

The scientists also examined other approaches, such as using thermal, electrochemical and photochemical energy to activate CO2 and water.

“All the fossil fuels are made by Mother Nature over millions of years,” Prakash said. “As chemists, what we’re trying to do is accelerate this process.”

Fortunately, the scientists are not starting from square one. For years Prakash and Olah have worked on advancing methanol fuel cell technology, which companies like Toshiba are developing for laptop and cell phone batteries.

Still, much fundamental research is needed for an economically viable way to achieve these goals. “We need to have breakthroughs,” Prakash said.

The timing may be right: More people are paying attention to alternative fuels now that their pocket books are hurting because of expensive gas, Prakash noted.

In addition, prizes such as the $25 million Virgin Earth Challenge Competition, whose overseer Alan Knight spoke at the workshop, may encourage innovation.

In his opening remarks, Olah remembered one individual who was a great supporter of fundamental scientific inquiry: Katherine B. Loker, the namesake of the Loker Institute.

Loker, who passed away June 26 at age 92, was an alumna, trustee and one of USC’s most generous benefactors, Olah said.

“She was a great friend and cared for this institution,” he said. “We will do our best to keep her memory alive.”

“I believe we can do something as chemists,” he said. “I don’t think humanity will go out of business.”

Saving the Planet With Carbon Dioxide