Cameron Carpenter may be one of the world’s most famous organists, but he isn’t above sharing the spotlight.

It may have seemed like an introduction f0r a rising star, but it was years in the making. And it wasn’t even Mellan’s first time playing the high-profile hall.

Cameron Carpenter: “Send me some music, if you like”

It started back in 2014, leading up to the 10-year birthday celebration of Disney Hall’s pipe organ, known as “Hurricane Mama.” USC Thornton Professor Emeritus of Composition Stephen Hartke was scheduled to premiere his Symphony No. 4 during the event, and he invited some of his students to a dress rehearsal. Mellan, an undergraduate at the time, was among them.

Carpenter happened to be performing at the same event, and Mellan was able to meet the artist he considers “one of the best in the world.” It was a brief encounter that ended with Carpenter giving Mellan his email address and saying, “Send me some music, if you like.”

A few months later, Mellan did just that.

“About every six months or a year, I’d send him a recording,” Mellan said. “And he’d send comments.

He’s a fantastic musician, and the things he does, he does for a reason.

“In the organ world, he’s terribly controversial because he has this way of playing he knows is very provocative. He’s not that controversial if you just speak with him. He’s a fantastic musician, and the things he does, he does for a reason. To hear from someone so original was interesting.”

Their occasional correspondence took on a familiar pattern over the years, until Mellan sent Carpenter an ambitious new composition for organ, Ballade de l’Impossible, and received a different type of reply. Instead of notes, Carpenter invited Mellan to make a guest appearance during his recital on April 7 with one caveat: He had to perform that piece.

Mellan was stunned. It was a monumental opportunity. Yet it wouldn’t be the first time he performed at Disney Hall: He had performed on the official Walt Disney Concert Hall Organ DVD when he was 16.

He’d need time to prepare, of course, and was given 26 hours to rehearse on the celebrated organ — a generous amount of time in such a busy a venue. The catch: His time was from midnight to 8 a.m. on the three nights prior to the concert (he was able to stay until 10 a.m. on the final night). 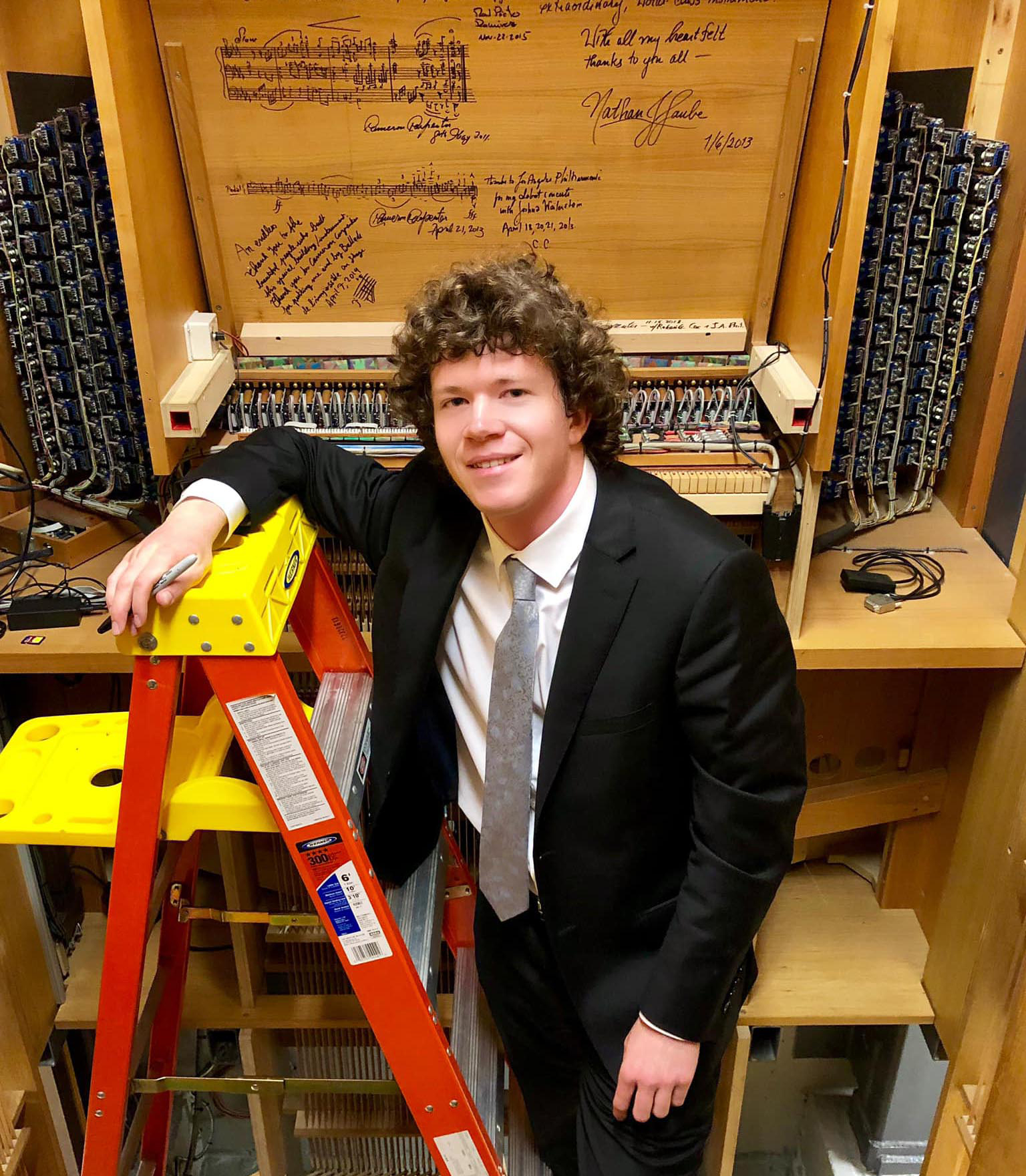 Thomas Mellan signed the back of the organ at Walt Disney Concert Hall after his performance. (Photo/Kevin Cartwright, Los Angeles Theatre Organ Society)

“I used most of it, actually,” Mellan said. “When you have that kind of time on that kind of organ, you can do some things that you would never think of doing on a different organ. I came up with sounds I didn’t know were possible. You have all that time and there’s no one there. You’re also half asleep.”

After three all-nighters in a row, the day of the performance arrived and Mellan was too excited to be tired. He recalled the moment when he was waiting off-stage, listening to Carpenter introduce him.

“He said he wanted to share the stage with someone equally deserving, and he felt this piece was important because of the progress it makes with technique,” Mellan said. “It was crazy to hear him say that because it’s a lot inspired from him. It was a crazy moment.”

The two performers exchanged a surreal high-five as they traded places, and then Mellan was at the instrument, where a calm fell over him. After all, he was about to play the music he had written and knew better than anyone else.

But there was one final task, one that highlights the fact that while Mellan admires Carpenter, he does not emulate him. Mellan has his own unique style of play.

“Cameron sits with the bench way up,” Mellan explains, “and he’s been known for breaking benches because he always wants them higher. I actually play really close and low.”

With all eyes watching, he had to adjust the bench. Still, it wasn’t low enough, so Mellan adjusted it a second time. People started chuckling, and he leaned into it.

“I told them, ‘Sorry, organists come in all shapes and sizes,’” Mellan said. “Then I had to lower it a third time. I said, ‘I think we’ve hit the benchmark.’ The crowd just roared. See, that’s not funny, but Cameron got them riled up.”

Lessons from the stage, and a generous performer

Having settled on a bench height, Mellan dropped the comedy act and went to work, giving audience members something more substantial to contemplate. They returned the favor. Disney Hall has a special feel, putting the audience in close relationship with the performer.

“It really feels like you’re playing in someone’s backyard,” Mellan says. “It’s so intimate, even though you have 2,000 people there. You’re able to communicate every detail that you wrote and imagined.”

Hurricane Mama was an ideal instrument to showcase the difficulty of Mellan’s composition. He could play as fast as he wanted, something not every organ can accommodate. More importantly, it taught him something.

I learned a lot of new possible sounds that I’d never heard or been able to make before.

“I learned a lot of new possible sounds that I’d never heard or been able to make before,” he said. “Those are all in the backlog of things for the next time I write a piece.”

New sonic possibilities were among the many lessons Mellan learned that day. He paid close attention to the audience and how its energy changed during certain passages. And, of course, there was Carpenter.

“Seeing his way of giving a concert from backstage — his attitude, his way of thinking about the music, the way he structures his program,” Mellan said. “It’s a learning experience with someone that great, just to sit there and watch them do their thing.”

In the end, as Mellan walked off stage, he saw Carpenter taking his picture, which later appeared on Instagram. It was a parting tribute from the generous performer who had gifted Mellan a priceless experience — a memento, as if he needed one.

It helps to learns your craft from the best, including two faculty members who make music with the L.A. Philharmonic.

While the Los Angeles Philharmonic is accustomed to premiering new works from noted composers, it is rare for the music to come from within the orchestra.