You finish business school and a global consulting firm offers you a high-paying job with great pay and benefits. Jackpot, right?

But then you spot another position. It’s at a new company, so there’s plenty of risk — and less pay. You’ll work long hours with no guarantees. Yet it’s a perfect fit for your values.

That’s the dilemma Mounir “Mo” Ghabrial faced this spring as he finished his undergraduate degree at the USC Marshall School of Business. It’s a challenge many students struggle with as graduation nears: finding a balance between their professional interests and their personal passions.

As Ghabrial grappled with the decision, he reflected on his favorite experiences as a Trojan. His mentors emphasized not just profits, but ethical leadership and leaving a positive mark on the community. He learned about social entrepreneurship and microfinancing programs that help lift people out of poverty. With fellow students, he traveled to Central America to boost small businesses in rural areas.

I didn’t want to lose sight of what I’m so passionate about.

Ultimately, Ghabrial found a way to blend his love of social good and business. He joined a social enterprise startup that helps people in Los Angeles find and afford healthy food, especially those in low-income and underserved areas.

Said Ghabrial: “I didn’t want to lose sight of what I’m so passionate about.”

A childhood dream inspires USC grad to focus on entrepreneurship

Ghabrial’s path to the business world started with a simple dream: owning his own Egyptian restaurant. Born in Dubai to Egyptian expats, he spent his childhood summers in Egypt cooking with his grandmother. His favorite dishes include stuffed grape leaves and molokhia, a rich stew made with braised greens and served with chicken and rice.

He envisioned going to business school, then training as a chef and launching his restaurant. Then his family moved to the United States when he was 12. Landing in the suburban California enclave of La Verne was initially difficult, because few of his classmates knew anyone from the Middle East. But joining the high school marching band gave him a close-knit group of friends.

It also helped him transition to USC, where he was a member of the Trojan Marching Band as a freshman. Although he enjoyed playing in the drumline and made lots of friends, Ghabrial wanted to pursue his passion for entrepreneurship and gain skills and knowledge that could help him realize his restaurant dream.

“I wanted to give everything else a shot before committing to this one organization for all of college,” he said.

He joined an entrepreneurship society and checked out other student organizations, but nothing spoke to him as much as Global Brigades @ Marshall. As a sophomore, he traveled with the student-run business consulting group to Panama to provide advice and support to small businesses in rural communities. It opened Ghabrial’s eyes to the world of microfinance — including using small loans to help lift people out of poverty. 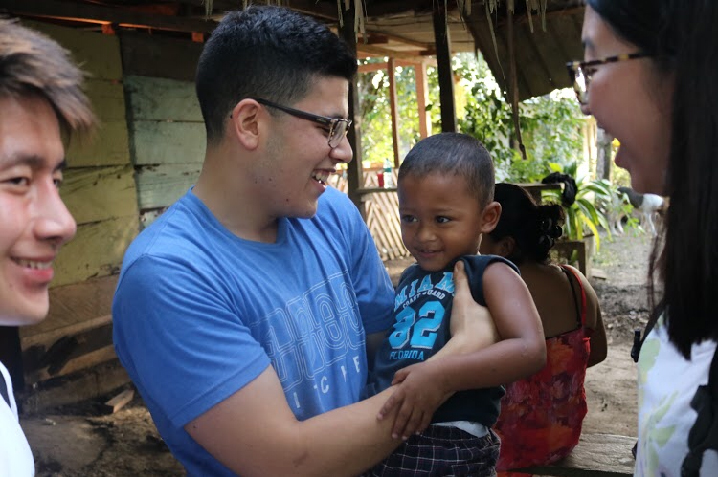 Ghabrial with local kids in Panama, where he learned about microfinance in rural communities. (Photo/Courtesy of Mounir Ghabrial)

Global Brigades establishes community banks that lend out money at very low rates. These microloans help people build their business and pay back the bank, which then lends the proceeds to another deserving community member.

Ghabrial remembers working with a woman who ran an empanada stand. In addition to aspirations of growing her business, she was dealing with health issues and wanted to save up for an expensive CT scan.

“She didn’t track her profits, she just had cash coming in from her sales and would use that to buy more ingredients,” he said. “She had no idea how much cash she had saved at any given time.”

Ghabrial and his fellow brigade members gave her advice and helped her get a loan and business license to create what she called an empanada factory. She started selling to stores around her community of Zapallal. Her company grew so quickly, her kids and grandkids had to lend a hand.

During a return trip to Panama in December, Ghabrial was thrilled to hear the empanada business is still thriving.

“You start to hear these stories over and over about how people have been able to use that capital they got on a loan to generate revenue for their business and pay the loan back successfully,” he said. “The repayment rate is incredible.”

Inspired by what he saw in Panama, Ghabrial found a plethora of opportunities at USC Marshall to explore his newfound interest in social entrepreneurship.

He attended talks by Adlai Wertman, the David C. Bohnett Professor of Social Entrepreneurship at USC Marshall and founding director of the Brittingham Social Enterprise Lab. Wertman encouraged him to apply to the USC Warren Bennis Scholars Program, a prestigious initiative that trains 20 students a year in the tenets of ethical leadership.

“I’ve always looked up to her, and the fact that I was able to take a class with her last semester brought my whole experience at USC full circle,” he said. “It inspired me to deviate from the more traditional path.”

By his senior year, Ghabrial had come to the realization that joining a big accounting or business firm might not be the right career choice for him. Then his convictions were put to the test when a major consulting company made him that tempting offer.

He agonized over the decision for many months, said Smrity Randhawa, assistant professor of clinical accounting at USC Marshall. The two have chatted regularly since Ghabrial took an introductory accounting class with her in 2016. She helped him talk through the decision, including weighing input from his other professors and family members.

I was impressed by how he was ready to let go of the safety net and go out on his own to find more opportunities.

“He had a guaranteed job lined up for this coming year, but he realized his heart didn’t lie in that industry,” Randhawa said. “Very few students take that kind of risk coming out of college. I was impressed by how he was ready to let go of the safety net and go out on his own to find more opportunities.”

Ghabrial found the right fit for his ambitions at Everytable. The L.A.-based company provides healthy grab-and-go meals throughout Southern California. Its prices are based on zip code, so a leafy kale Caesar salad might be $5 or $6 in communities with a median income of $30,000, compared to $8 or $9 in wealthier areas.

As operations coordinator, Ghabrial is helping the startup establish its systems and processes as it rapidly expands. That includes optimizing delivery routes and managing its inventory of fresh produce to reduce waste. He’s working part time until graduation, about 16 to 20 hours a week, and he’s already confident he made the right call.

“There’s always a risk the company might fail, that we might not meet our growth targets or raise more capital, or there might not be the same demand we’re anticipating,” he said. “But as an aspiring entrepreneur, having this sort of operational experience with a company at this point in its life cycle is absolutely crucial for me.”

Ghabrial is also excited to be working in the same realm as his original dream of owning a restaurant. He’s learning many lessons about the food industry that will prove invaluable should he choose to launch his own venture — perhaps an Egyptian restaurant with a social mission like feeding the needy — later in his career.

His supporters are confident that no matter what path he takes, Ghabrial will find success.

“He’s never backed down from a challenge,” Randhawa said. “When I think about a student who would do really well in the future, it would be Mo. He’s going to make a difference in the world, I can tell you that much.”

USC senior’s Club H2O is the first step to launching a global business spun off from that charity.