One of the eight student housing facilities at USC Village will begin the fall semester with a new name: the William and Leslie McMorrow Residential College.

Named in honor of a 2015 donation by USC Trustee and alumnus William McMorrow and his wife, Leslie, the five-story building provides a community for undergraduate upperclassmen to engage in educational, social and cultural activities.

“Our residential colleges are more than just a place for students to study and sleep,” said USC interim President Wanda M. Austin. “They provide an enriching living-learning experience, one that helps our students develop lifelong bonds and pursue personal growth. Bill and Leslie McMorrow certainly understand the importance of this foundational growth among our students, and are deeply committed to ensuring that our students’ time at USC is marked by excellence.” 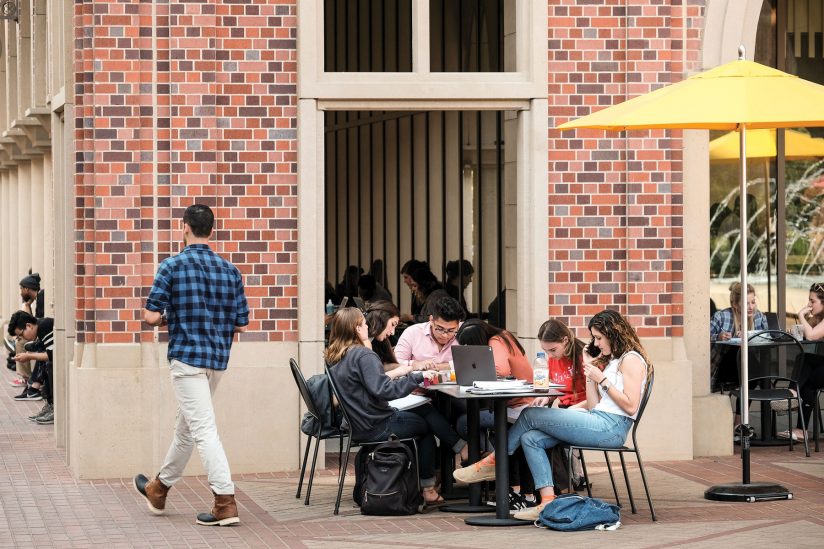 Students study together near one of USC Village’s residential colleges. (USC Photo/Gus Ruelas)

The student housing complex, which was opened as Priam Residential College, will embrace its new identity this fall, including the unveiling of its revised crest. It’s a fitting time to reveal the college’s new name, given William McMorrow completed his bachelor’s degree at the USC Marshall School of Business 50 years ago.

“USC does a tremendous job of fostering relationships, building networks and creating a sense of community that I believe is unmatched on any other campus. The friendships I built during my time at USC have been such a big part of my success in life,” said McMorrow, who went on to earn his MBA at USC in 1970.

“Leslie and I are deeply honored to have a part in supporting the unique residential college program at USC and to help so many deserving students share in that special experience of creating memories together.”

In addition to serving on the USC Board of Trustees since 2015, the executive board of the USC Lusk Center for Real Estate and the President’s Leadership Council, William McMorrow is a longtime USC benefactor. He endowed the McMorrow Global Real Estate Initiative, helped launch the Performance Science Institute at USC Marshall and created a USC initiative called With Your Shield that provides educational and employment opportunities to help veteran families transition to civilian life.

The McMorrows also gave the largest donation ever to USC’s signature college access program, now known as the USC Leslie and William McMorrow Neighborhood Academic Initiative. The outreach program helps talented young students from the communities around USC prepare for college through rigorous educational support. The McMorrows will be honored during the initiative’s annual gala on May 2.

In recognition of his commitment to the Trojan Family, USC celebrated McMorrow last year with its highest alumni honor, the Asa V. Call Alumni Achievement Award. His philanthropy extends beyond his collegiate alma mater as well — he and his family support Loyola High School, the Navy SEAL Foundation and City of Hope.

Leslie McMorrow earned her bachelor’s degree in business economics and Asian studies at the University of California, Santa Barbara, before studying at Sophia University in Tokyo. She embraces community service as a member of the board of overseers of the Hammer Museum and the board of the Rape Foundation.

Both William and Leslie McMorrow’s families have a long history at USC. William’s father attended USC following his service in World War II, and three of his eight siblings attended the university as well. Leslie’s connection with USC dates back to her grandmother’s time as a student in the 1930s.

USC Board of Trustees elects international executives as new members

William McMorrow and Heliane Steden bring their business acumen and leadership to their new roles.

Residential college at USC Village renamed in honor of gift