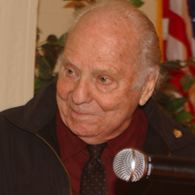 Gerald A. Larue also is an adjunct professor in the USC Davis School of Gerontology.

Emeritus professor Gerald A. Larue has received the Leibovitz Award for distinguished volunteer service to seniors by a retired USC faculty member.

Larue, 80, is emeritus professor of religion in the USC College of Letters, Arts and Sciences and adjunct professor of gerontology in the USC Davis School of Gerontology. Elizabeth Redmon, executive director of the Emeriti Center, presented the honor to Larue at the Provost’s Faculty Retiree Luncheon.

Redmon said Larue has spent his adult life working in the fields of ethics, values and aging and that he wasn’t necessarily nominated for service to individual seniors — though he spends significant time helping individuals — “but for service to multitudes of seniors through the influence of his activities and teaching.”

Larue, a religious scholar, ethicist and humanist, is an advocate for “death with dignity” and has written and spoken extensively on issues surrounding death. His most recent book is “Playing God: 50 Religious Views on Your Right to Die” (1996), and his spring 2004 teaching schedule includes two classes, “Social and Psychological Aspects of Death and Dying” and “Ethical Issues in Geriatric Health Care.”

“I could cite many examples of your personal care for other retirees, but your service to seniors reflected through your students will be seen for generations to come,” said Redmon in presenting the award to Larue.